Ladies Should Listen  is part of a strand curated by Ehsan Khoshbakht, dedicated to a "'comparative'  retrospective' of Frank Tuttle and Stuart Heisler, 'celebrating brilliance outside the pantheon' and 'inspired by the philosophical and political visions they shared, the similar terrain they walked, which led to them tackling almost the same subjects, albeit in two vividly contrasting styles - each often mirroring the work of his fellow director'. Phew.

There's a lot of assertion packed into that sentence and a number of others in Ehsan's introduction and I imagine some cinephiles might care  to take it apart. So... first things first, I dont think the selection, at least as far as I can see has Heisler doing an adaptation of a French bedroom farce like Ladies Should Listen, an early Cary Grant picture from 1934 in which Grant is playing Julian de Lussac, a well to do Frenchman who has put all his money into the purchase of an option to buy a nitrate mine in Chile. The plot involves Grant resolving both this financial imbroglio and a more complicated situation with three different women - a rich heiress, his building's telephone operator and an on the make Chilean and her gangster husband.

The whole farce lasts just an hour and after the initial opening scenes marking Julian's return to Paris just a few sets. The opening has "Falling in Love Again" playing on the soundtrack and its shelter skelter from there via a script by Claude Binyon and Frank Butler adapting Guy Bolton's English-language theatrical adaptation of Alfred Savoir's original. I hope you got that. Grant's buddy is the well to do Edward Everett Horton who plays Paul Vernet who keeps trying to become engaged to Susie Flambeau the bespectacled heiress who keeps hurling herself at Grant.

Grant gives Horton some advice about what women like men to do and as a result Horton throws off his inhibitions to have his way with the heiress, a scene rendered by a gap in time and then her asking him to borrow a pin so that she can repair the torn shoulder strap of her dress. Sex on screen has a million markers.

That's as close as anyone gets to being caught in flagrante and Grant ends up with the money he needs and the pretty switchboard girl played by Frances Drake (Frances Drake?!). Whatever happened to her?

Melville, Le Dernier Samourai  is a 53 minute TV doco made for Arte by Cyril Leuthy about the life and times and movies of Jean-Pierre Melville. It is  very good indeed and would serve as a useful primer for anyone about to embark on a crash course of Melville's films, no matter how selective that course may be. There are four contemporary interviews threaded throughout (Taylor Hackford, Volker Schlondorff and two of Melville's nephews) and by turns each of them is complemented with a lot of footage of Melville himself and his film-making confreres. One revelatory moment is a piece of an audio recording  done during the film of L'Aine des Ferchaux  when Jean-Paul Belmondo explodes and gives Melville the benefit of his views on his film-making technique insofar as it goes with Belmondo. He does call the director "M. Melville".

It seems that Melville fell out with many, maybe most, of his leading actors over time. Alain Delon, Simone Signoret and Lino Ventura all come to explain how they weren't speaking by the end.

A very good example of its kind - well-researched, good archival material and a subject of endless fascination, especially as his thirteen feature films yielded up a higher quotients of masterworks than most and did it notwithstanding much career adversity that ran from the dangers of the French Resistance, early film industry indifference, a catastrophic fire that destroyed his business and personal health issues that saw him join both his father and grandfather in being dead at the age of 55.

THE RED CIRCLE (Jean-Pierre Melville, France, 1970) - First film in a season of Melville's films at the Ritz Cinema Randwick presented in association with Cinema Reborn 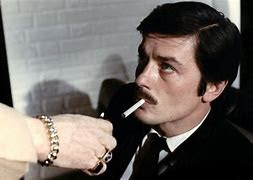