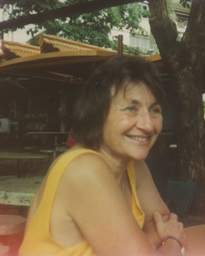 I first encountered Sylvia Lawson's name in George Munster’s Nation  and when she left the film critic’s job I got the chance myself to write once a month. Don Anderson did the other contribution.

I met her shortly after when she came down to Melbourne to report on the Melbourne Film Festival. Early on she became a great friend of Erwin and Ann Rado, friendships which continued to the end.

Back in 2005 I hadn’t seen Sylvia for quite a few years. Then when Karen and I moved to Sydney. We came into some sort of regular contact again at the Sydney Film Festival and at the WEA Film Group screenings. Sylvia was a regular attender at the now legendary monthly series curated and introduced by Barrett Hodsdon devoted to a history of the French cinema from the silent period to the 70s.

Not long after that I was working for Sydney & Sutherland Lifeline helping to organise its two annual Bookfairs and Sylvia got in touch to say she wanted to do some downsizing of her library. I don’t know how many trips I made to take away boxes of books.  She had difficulty parting company with any of them and a visit always involved a long talk, and much coffee, about everything that mattered.

That was the way we saw each other for some time. At the 2015 Sydney Film Festival we sat down in front of Sylvia and next minute resumed the conversation about things that mattered. She had moved to Canberra where she had set herself up in a nice apartment block on Northburne Avenue in Turner, right on the edge of the city. She was loving the colder nights and looking forward to real winter, something you just don’t get in Sydney.

She always wanted to talk about the young generation of blackfellas making the best Australian movies of the day, though in recent times she shared her admiration for Rolf de Heer and the films Rolf made with David Gulpilil especially.  We spent a lot of time one day talking about Samson and Delilah (Warwick Thornton, 2009) and she loved Ivan Sen’s films.

At that year's SFF we met up before seeing Patricio Guzman’s  The Pearl Button (Chile, 2014) which she expected to be a fine movie and which she already proposed to write about after seeing it for a second time.  She did that for one of her last posts on Inside Story.

It possibly brings things full circle that that year she put up a post devoted to the Sydney Film Festival. Some of the content of that was among the things we discussed as we sat in the State waiting for the Guzman film to start. The Festival, which she once directed herself many years ago, had changed. Not beyond recognition but organically over time, responding to different market conditions and to the new technology of digital presentation. Her report covered the SFF as an event, picking out contemporary  themes, mentioning the blackfella programs as well as the new, inevitably adulated, whitefella big(ger) budget movies. Once upon a time there used to be quite a few extensive reports like this published after the event but today only the material published by Senses of Cinema remains.

She had also developed a passionate interest in Palestinian and Arab cinema and when we last spoke she mentioned a forthcoming festival and a couple of titles she wanted to see. The interest in outsiders working to get their films shown was something that was a part of her passions for the fifty years or so she devoted to writing about and enjoying the movies.

Sylvia had a long writing life. History, politics and culture were her fields and she wrote very well. She took particular pride that she was for instance the only Australian to make a contribution to the giant Jean-Luc Godard exhibition catalogue published by the Pompidou Centre.  She wrote a novel plus stories and essays and never stopped writing and researching throughout her life. In the process she became one of the most enduring and respected figures of Australia’s regrettably too limited intellectual discussion.  She was a gadfly and a provocateur but always polite and always the writer of very great elegance.

Back in 2015 she had an admission to hospital after collapsing at a conference. After a long recuperation she pulled through and not long after she was out there in public  at the national Film and History Conference, presenting and debating issues no doubt with her usual passion, her conviction, her gravity and her insight.

Sylvia Lawson had a fine and robustly intellectual life. Her passing represents a great loss but at the age of 85 you could say that she had a terrific innings and during her life she made a fine contribution to the cultural and political affairs of the nation. 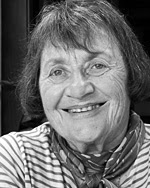