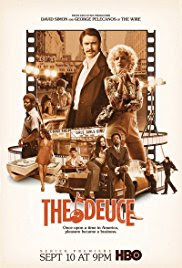 There’s a well-known film critic and knowledgeable music journalist in Sydney who refused to watch Treme after its first season. Not because he didn’t like it, but because he liked it too much. Over noodles for lunch, he hissed: “David Simon killed off the best character in the final episode and I haven’t watched it since. I’m still pissed off”.

I suspect Simon would appreciate that. Three further seasons of the great Treme characters and plenty of sublime New Orleans music have not been watched because this viewer is still getting over losing Creighton Bernette (John Goodman) into Lake Pontchartrain at the end of season one.

Since his credit as sole “creator” of The Wire, Simon has teamed up with others to develop his TV series – with Ed Burns and Evan Wright for Generation Kill, with Eric Ellis Overmyer for Treme and now George Pelecanos for The Deuce. I’m not aware of Pelecanos having any particular aptitude for comedy, but The Deuce is easily the funniest series Simon has made.

It explores a world where pimps run street girls, regularly having breakfast with them after a hard night. The pimps, however, while not financially worse off, find themselves sidelined and suffering self-esteem problems as the new Mafia-led industries develop around them. The cops on the beat are pretty benign also: sensitive, almost caring and on first-name terms with the prostitutes.
The funniest scenes are the porn shoots and here David Krumholtz shines as the movie director Harvey Wasserman whose suggestions to his humping “actors” never get much beyond “make it look real”. When he leaves the cast and crew stranded because his car has broken down and he can’t get a tow-truck, Candy (Maggie Gyllenhaal) takes over as director.

The dick takes us in…the action is of him walking up and taking her from behind, right? If you start on her pussy, you’ve got no story. It’s like…

Hitchcock-Truffaut? You just gave a pretty good explanation of how action dictates camera movement. The Hitchcock-Truffaut Interviews…but [here] they’re talking about dicks and pussies instead of…I don’t know, a guy getting up from a table.

Candy
Can you explain that to Greg [cameraman]? About Hitchcock and Truffle? Because he definitely doesn’t get it.

In one scene the characters debate whether to go to Play Misty For Me or Straw Dogs. A former construction worker now running a massage parlour drops Marshall McLuhan’s name as though he were talking about baseball. One of the prostitutes is having trouble with the book she’s reading and holds up the cover – Immanuel Kant’s Critique of Pure Reason.

It’s as well written and acted as Simon’s previous work and while some of the characters may at first appear stereotypical, it doesn’t last. At times, a guide to NYC street slang would help. I had to look up Vesper. It means “A sensitive, kind, silly, smart, and awesome girl. She always has your back, and is a great friend. She is a friendly fox and loves stuffed animals and the color pink. You'll be lucky to have a Vesper as your friend, so don't let her down” At least, I think that’s what it means.