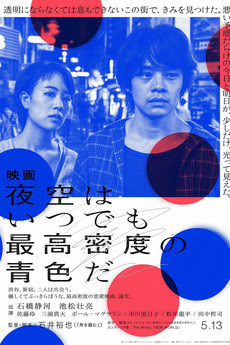 It is derived from a book of poems by a young but successful writer and is in the hands of a young but successful director. It centres on an alienated exploited one-eyed construction worker Sôsuke Ikematsu, hired for the 2020 Tokyo Olympics, who pairs with alienated Shizuka Ishibashi, a nurse and part time girlie bar waitress, who feels abandoned after her mother’s suicide. Her friends tell her to stop talking about death.

There are attempts at showy technique like heat shimmer, four way split screen and animation but multiplex films do those too. The film totally lacks the forward momentum of a commercial movie, going through developments that have no bearing on the outcome and creating a dozen moments where you expect unavailingly to see an end title come up.

That sound you hear is film festival directors salivating.

The background is quite vivid - the detailed construction site which is destroying the workers’ bodies, the dormitories and bars where they drink to make their lives less miserable, the girls-only apartment block where Ishibashi is keeping a surprisingly high maintenance turtle in a temperature controlled tank with an air raid warning monitor.

The pair wander through the Shibuya and Shinjuku districts of Tokyo encountering oddities like a flying airship, a lovable puppy that is captured, caged, put down and incinerated in cartoon form and an ignored girl busker singing about armpit sweat.

Yûya Ishii flew out to introduce the film and he mentioned this. His film is meant to show the things happening around people of which they take no notice - exactly what traditional films try to exclude to focus audience attention. He has a following on the festival circuit but this is the first piece of his work to come my way. Bracket him with Hirokazu Kore-eda.