The Two Irenes
To imagine As Duas Irenes/The Two Irenes, picture a grotty South American David Bailey movie with a couple of thirteen year old girls getting about in scanty clothes in the summer heat, swimming, copping a feel from boys at the local movie theatre, which seems to have no other audience (they won’t tell us what the program was) and sharing a secret. Traveling man Marco Ricca as their dad is running two families with the girls, both named Irene, the product of his bigamous liaisons with two women. 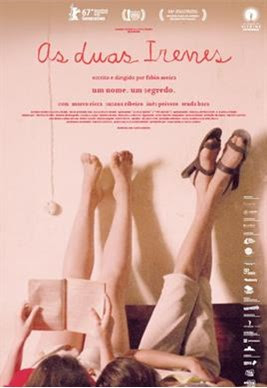 This seems to be a standard South American fantasy. One of the Magic Realism movies has the heroine discovering that she had a serial dad populating the city with siblings she never met.

In As Duas Irenes there’s a bit of contrast between straight laced wife Suzana Ribeiro and earth mother, dress maker wife Inês Peixoto and contrasting family meals. Older sister Teuda Bara is got up posh for a local runway show, where the other Irene watches, making dad nervous, and Torres starts acting up as she explores the situation. That’s pretty well the plot. More characteristic is the girls getting sweaty and being filmed through mosquito netting.

Just when it looks as if something will happen, we get an end title. Hazy low contrast images and tacky setting create a bit of atmosphere but not enough to sustain feature length.

Co-producer Ricca has been around for a while. He was in Bruno Barreto’s 1997 O Que É Isso Companheiro?/Four Days in September. The Irenes appear to be doing their first movie.

After the excellent Spanish, Italian and Iranian events, it’s kind of re-assuring to find that some of the movies that never make it to us are as unremarkable as the ones that do.

That's Not Cheating
How often do you see an Argentinean romcom? SLAFF has determined to remedy that omission. 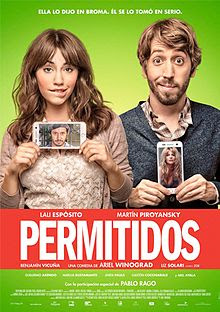 All the ingredients are there in Ariel Winogad’s Permitidos/That’s Not Cheating . The winning Lali Espósito heads up a personable cast. She even sings the play out music, and the film zips along with good living detail. Unfortunately they are re-treading the not all that funny premise of the Farrellys' Hall Pass and we get that drear combination of people talking dirty but not getting (really) naked and enthusiastic build-ups to jokes that don't have a punch line.
After some nice animated-on-live action titles, there’s the diner where dorky Martín Piroyansky nominates model Liz Solari as someone he'd like to get it on with and his long time fiancée Espósito says it will never happen and he could have a free pass to fill that fantasy. Sure enough his motor bike hits the bag snatcher who made off with Solari's Louis Vuitton and things go from there, with Piroyansky doing his best to keep his gossip created celebrity from his intended through situations that get out of hand - him becoming the office hero (his face on t-shirts) stealing his chubby mate’s App idea to bolster his new found status and half drowning the obnoxious swimming pool kid.
Espósito's own eco-freak nominated object of desire, Benjamín Vicuña and his gross stalker Maruja Bustamante, get in on the act. The best gag is an art work consisting of body painted Vicuña kissing a gallery tree. The whole thing gets to be subject of a reality TV show and the lead pair of course have no joy from living out their fantasies.


There's probably a bright seventy minutes buried in this one's flabby a hundred and six. Now if we could get Harvey Weinstein to ... maybe not.
Posted by Film Alert 101 at 17:01