SLAFF's Argentinian Una noche de amor/One Night of Love directed by Hernán Guerschuny starts nicely with titles (couldn't see whether they were by the same guys as did Permitidos?) filmed downwards on shaven headed Sebastián Wainraich driving a red kiddie car around stops on a play mat. They pick up on this later in the film with drone shots of his full size car in the night time traffic. 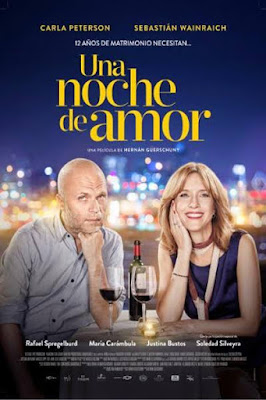 Writer Wainraich’s going on a night out with blonde wife of twelve years Carla Peterson, having parked the kids with mum Soledad Silveyra. Then they get the call telling them that the couple they were about to join have split up. This makes their night chaotic as they take sides with the separated partners, find problems with the staff at the restaurant, where they only need a table for two after reserving four. (The waiter chases them into the street but it’s only to return Peterson’s red cell phone) They argue with a taxi driver, an unsolicited car minder and the parking attendant who Wainraich bribes to let him rough him up to impress Peterson. They go to a party and mix with irritatingly jolly well off business associates and by now we are getting real bored with our dual protagonists. They’re not witty enough to be Woody Allen characters or glamorous enough to be Romcom leads.
However the piece has a design that hasn’t been obvious to this point. Apart in the street-lit night, Wainraich has an fantasy of a being paired with the appealing young neighbour and snaps out of that. Again with Peterson he realises that the children he didn’t want and now dominate their lives he can’t imagine living without.
The leads are personable enough but their TV background hasn’t delivered them the assurance to head up one of these. A few nice touches like the kids sprawled out, cut to the similar disorder of  fruit salad on a bench, or the couple’s romantic moves frustrated by seat belts. Details are exactly chosen - the Sinatra “The Way You Look Tonight” CD that his car stereo has been mangling or the joke of the Clintons pulling into a service station and finding one of her old flames pumping gas. Bill turns round and says "That's what you would have married." Hilary replies "If I'd married him, he'd be president of the United States."

The film’s interest is that it is delivering elements that are familiar in a way suggests more reality than we are used to seeing - and about time. I was beginning to wonder whether my curiosity about Argentinian film was misplaced.
Posted by Film Alert 101 at 16:29