Editor's Note: These notes below trace back to the days when Film Alert started as a weekly email recording some thoughts about films coming up on TV, including cable TV which at the time was a medium almost entirely ignored by the newspapers. I haven't attempted to bring them up to date or include notes that might correct mistakes or other matters. The films themselves however seem to be right off the radar. However, I wouldn't know if any or all are offered by the various streaming services that have largely replaced the DVD. The Devil’s Playground (Fred Schepisi, Australia, 1976, 107 minutes) Schepisi’s first feature was quite a revelation in its day. Apparently autobiographical it told of a Catholic boys school where the students were already being groomed for a future in the priesthood. It runs through all the familiar crises revolving round religion and male puberty and it shows some interesting sides to the life of the Brothers who teach, their sexual fear and repression, their inglorious hypocrisy. The film almost drifts through the story and in those circumstances you do become aware of the craftsmanship going into it. The studied acting performances, the beautiful compositions, Schepisi’s subject matter, in the three feature films he made in Australia was always marked by some strong subjects and its always been a disappointment that he should have chosen to labour away in the states on rather too many films with nothing much to say. 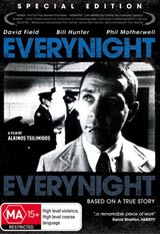 Everynight Everynight (Alkinis Tsilimidos, Australia, 1994, 85 minutes) Alkinis Tsilimidos still seems to be under everyone’s radar. Silent Partner, which I liked a lot, got very little attention and Tom White, which I also liked, doesn’t seem to have changed that but it should have. Anyway, the latter was entirely overlooked in this year’s AFI awards and Alkinis is ignored in The Oxford Companion to Australian Film. That shouldn’t have been. This early film is based on Ray Mooney’s play and the credits tell us the film is in memory of notorious thug and hit man Christopher Dale Flannery. I’m told Flannery attended Moreland High School a few years behind me so I can’t for the life of me think how he could have become a contract killer as was alleged. One of life’s mysteries. The film is brutal and deeply shocking. The violence is unrestrained and the sadism on show is very ugly. The central role, Dale (David Field) is an utterly stupid petty criminal whom the prison system turns into a man of extreme violence and rat cunning. A telling combination. Made on video in black and white it only seems to screen very late at night no doubt to help the channel fill out its required quota of Australian product. No matter. It’s a film that has to be seen if only once and it’s a pointer to how good Tom White would be when it was made. Then again, I seem to be the only person who thinks that. I also think a better future for the Australian cinema lies more with Alkinis Tsilimidos than it does with other more highly touted names, especially names associated with the alleged comedies produced with large dollops of taxpayers’ funds by Macquarie Bank. 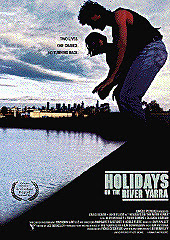 Holidays on the River Yarra (Leo Berkeley, Australia, 1991, 84 minutes) What has this film in common with the following Australian films –Snapshot, Harlequin, Twelfth Night and Breaker Morant? All of them currently screen about once a week at ungodly hours of the morning on  Foxtel’s repository of the mostly mediocre, Showtime Greats. Philip Brophy’s droll gorefest Body Melt also used to screen at these hours in recent months but it appears its run is over. (Maybe the producers of Body Melt have withdrawn it and are re-doing the titles and the artwork to move William McInnes and Lisa McCune up the billing, preparatory to a DVD launch).  No matter, despite the timeslots and its company, both of which I assume relate to the need for the channel to have some Australian content somewhere, Holidays on the River Yarra is a film which should be seen. I loved it when it came out. It’s the sort of modest, droll and acutely observed film-making we dont encourage nearly enough. A couple of dumb bastards from the west Melbourne suburbs get mixed up in some idiotic idea to get on a boat and go and invade some island republic and get lots of treasure. Dumb is not the word but the social canvas is drawn with complete accuracy and the two boys are terrific. We get the suburbs, we get the dog races and the pubs and the TABs. I think it may have been the first screen appearance, at least the first I noticed of the absolutely delectable teenage Claudia Karvan as well. Leo Berkeley never got to make another feature as far as I know and that’s a pity. Self-effacement and modesty have only ever had a toe hold in our industry and he was another who was probably discouraged at being spat out. The title? Say it quickly and you get a whole new (double) meaning. 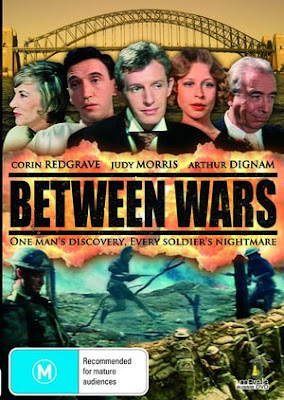 Between Wars (Michael Thornhill, Australia, 1974, 100 minutes) I thought Between Wars had slipped between the cracks. At the time it was made, it was treated with the same attention as the new films by Weir, Noyce, Armstrong, Schepisi and Beresford but Thornhill’s career never took off in the same way as those guys, all of whom had pretty high international recognition by the end of the decade. Perhaps it was the film’s politics which counted against it. Australians and the rest of the world may not have been interested in the story of a man who spends his time in opposition to the establishment through the bleak years between the two world wars. Frank Moorhouse wrote the script and Corin Redgrave contributed a really good performance as the near hapless doctor who struggles against the forces of fear, conservatism and moralism. Its anarchist viewpoint put it way out of even the safe confines of left-wing thinking. It was as close as Mike Thornhill got to making a masterpiece and it stands up in the memory rather better than the often shallow costume dramas and literary adaptations that were the funding flavour of the time. The film has not been released on DVD and I’m not aware that the National Film Archive has made any effort to make a new print for re-screening at festivals here and overseas. That’s a pity but its day will come and Thornhill’s work on this and his next film The FJ Holden will be recognised for the great contribution they made in our recent film history. 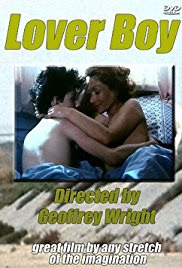 Lover Boy (Geoffrey Wright, Australia, 1988, 58 minutes) Showtime Greats seems to have the rights to any number of the most interesting lesser light Australian films of the last few decades and no doubt shows them, in a largely random fashion, to meet its Oz content quotas. So, buried away, usually late at night, are some of the real treasures of our national cinema. Lover Boy is very much one of those. It’s not quite feature length and it was made on a shoestring but that doesn’t affect its quality. It’s a very bold story. Noah Taylor plays a sexually precocious adolescent who gets involved with a near middle-aged neighbour (Gillian Jones). It’s a taboo subject, increasingly so if you read today’s headlines about school teachers being called to account for past perfidies with teenagers. It was the first film made by Geoffrey Wright and he has gone on to a fitful career chronicling a few other outlaw sides of society. Most notoriously of course he made Romper Stomper, which set Russell Crowe’s career going but caused a storm of critical dismay for its alleged sympathy for nazi-like skinhead culture. Wright got pretty emotional about the critical reception and hardly covered himself in glory when he emptied a glass of wine over one critic who had made clear his distaste.
Posted by Film Alert 101 at 22:52