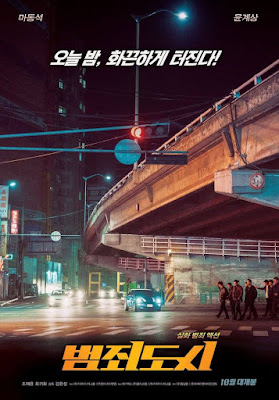 Fans of violent, gritty Asian crime films shouldn't miss THE OUTLAWS, a South Korean gangster pic showing around Oz at selected multiplexes and Melb's Chinatown cinema. It's down to single daily sessions at most theatres but is well worth making an effort to see.

It details a crime spree which raged in Seoul's Chinatown District in 2004, where Chinese triad gangs attempted to take over the protection rackets being operated by local Korean gangsters. Korean cop Suk Do (Ma Dong-seok from TRAIN TO BUSAN) and Mainland crim Chen (Yoon Kye-sang) are forces of nature separated by the law.

It's very violent (how it avoided an R-rating is beyond my under-standing) but once it hooks you it just doesn't let go and barrels along at a tremendously enjoyable pace. The seedy neon-lit locations and their brutal inhabitants are, at times, reminiscent of the best work of HK helmers such as Ringo Lam (FULL CONTACT), Johnny Mak (LONG ARM OF THE LAW) and Johnnie To (A HERO NEVER DIES). There's not a gram of fat on this film and it has a story line which never tries to be anything else but a hard-as-nails crime narrative. In short, it's a visceral, brutal brilliant movie!