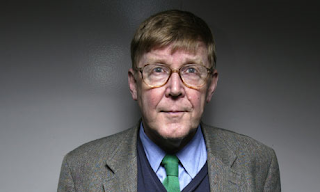 Maybe its all part of a carefully crafted persona, an attempt to create a brand in the very same way as Maria Sharapova. No. When you look back at the lifetime of work by Alan Bennett it's hard to feel other than massive admiration for what's been done and much anticipation when something new looms. The mix of deadly smart dialogue skills, the seeming polite reticence, the honesty, the self-effacingness, the sheer normality of a man whose career seems dedicated to work of just about any kind from jobbing actor to full-fledged auteur. The preparedness to be be part of collaborative enterprises and to return to trusted colleagues is however a most admirable trait. Currently it seems to be his professional relationship with Nicholas Hytner that is the dominant one. Both the production of his new plays and the direction of the recent film adaptations are Hytner's work. I'm not sure its of any especial significance or brilliance but Hytner's task is to do an efficient job and see that it all gets done. Who is Hytner. You would never know anything about him from the Bennett work he touches.

The Lady in the Van  is directed by Hytner from a script by Bennett that started as modest memoir of his life in Camden and then was slimmed down and adapted for the stage before now being ipened right out to show not just one but two Bennett's.Thus there's a moment when Bennett is talking to his alter ego, the one who does the writing and the nagging, as opposed to the one that does the living and the putting up with things, and 'the real Bennett' makes clear that the eccentric Miss Shepherd occupying his driveway is not something he wishes to encourage and that putting up with her is not because he sees her as a subject. "I want to write about spies". Which he has done on a number of occasions, the first of which being after Miss Shepherd had occupied the space out front. It was, I think, the first of his plays I saw produced on stage, a production of The Old Country, written in 1977 but produced in Melbourne in 1980 with Robert Morley in the lead. It's another rumination on those Cambridge spies Burgess, Maclean and  Philby who have properly fascinated Brit writers for decades.

I didn't know anything about some of the stuff he had already done, most notably the several small masterpieces he did with Stephen Frears for the BBC, A Day Out (1972). Sunset Across the Bay (1975) and A Visit from Miss Prothero  (1978). There were many others as well, most notably the ever-famous An Englishman Abroad (John Schlesinger,1983) and The Insurance Man (Richard Eyre, 1986) which danced around the life and themes of Franz Kafka and introduced the amazing Daniel Day-Lewis to a stunned crowd at the 1987 Melbourne International Film Festival.

That film got entered into MIFF when the local office of the BBC sent down a pile of tapes of stuff that the ABC in its wisdom had decided against running or, worse, never decided about anything at all as part of its then output deal with the BBC. A fine old time was had by the then functioning selection committee running through them all.

Bennett returned to spies again when he and Schlesinger targeted in on the fourth man, the Keeper of the Queens Pictures, Sir Antony Blunt  in A Question of Attribution (1991). It has been a rich vein that Bennett has mined rather a lot. There has been both a radio and a theatre adaptation of An Englishman Abroad.

Of those four guys who arrived fully formed when they unleashed Beyond the Fringe on an unsuspecting world and, among many grandiose claims, re-invented satire, it was the blinking, retiring gay guy who eventually went on to achieve most and to endure publicly. I know that Jonathan Miller still directs operas and does TV productions of them and such but really that's a minor trade and the people who appreciate it are a minority of the minority who actually go out to any form of theatre,

That was back in 1962 at the Edinburgh Fringe. Bennett has been the man who most especially has engaged with audiences of all kinds. I cant claim any wildly intense study of his work. I've still missed more than a few of the films he has written, perhaps most notably The Madness of King George (Nicholas Hytner, UK, 1995), a pleasure still awaiting. In fact the work for film is probably the least of it, even though he seems especially interested to be a collaborator as well as an auteur.

In the meantime, there is one (among many) commendable aspect of the portrayal of Bennett by Bennett in the very enjoyable and entirely unsentimental The Lady in The Van. At the beginning of the film he takes up residence in a nice street in Camden, quickly discovers some snobby neighbours and one or two others who dont seem to be too bad as representatives of the Brit middle class, occasionally has a cross word with others and on one occasion is shown giving a boozy dinner party to them all. You dont get the impression he would really have enjoyed their conversation but there you are. He easily fitted in.
Posted by Film Alert 101 at 13:07