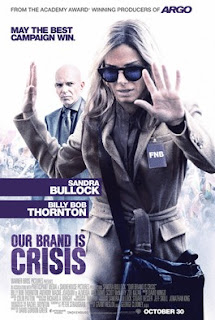 Our Brand is Crisis (David Gordon Green, USA, 2015) shares a title and a basic premise with Rachel Boynton’s 2005 political documentary (unseen by me), but entirely fictionalises the characters and events to tell a different story. Sandra Bullock plays Jane Bodine, a semi-retired American political strategist hired to run the public relations campaign for Bolivian presidential candidate Pedro Castillo (Joaquim de Almeida). Castillo’s heavy-handedness during his previous term in office has made him unpopular with the people. Bodine’s chief tactic is to convince the Bolivian people their nation is in a crisis, and that such a man is exactly what they need to work their way out of it.
The political machinations here are the highlight, as we see dirty tricks employed from all of the major candidates. Fake flyers are distributed and misattributed, speeches are directly sabotaged and so on. Bullock’s character is less convincing, often played in a broadly comic fashion which doesn’t fit the material at all. This film is a near-miss from a director with some strong work in his past. I suspect I’d like the documentary more. For a better film on the subject of political PR, take a look at No (Pablo Larrain, Chile/France/USA, 2012). 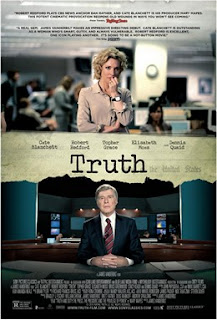 Truth (James Vanderbilt, USA, 2015) is another film which was very nearly very good. Cate Blanchett and Robert Redford offer a pair of great performances as American journalists Mary Mapes and Dan Rather. Their decades-long relationship is made completely believable by these two veterans of the screen. Mapes was the producer and Rather the presenter of a 2004 60 Minutes story which reported that then-president George W. Bush had been severely negligent in his duties during his time at the Texas Air National Guard, and that his position there was offered as a political favour to his father. Mapes and her team aired testimony to this effect from several sources, but the broadcast included as evidence some documents which may have been forged. The documents, of course, became the focus of the public’s reaction. The film focuses on this report, from the initial excitement of the discovery through to the consequences of the scandal.

The story is fascinating, but the presentation is overwhelmingly mainstream, to the film’s great detriment. Character motivations are oversimplified in a way which makes them feel like nonsense, most notably the tangential involvement of Mapes’ father. There are a few too many slow-motion montages of news being gathered, set to uplifting music, and one particularly unimpressive speech about the importance of journalism delivered by Topher Grace, who is not working on the same level as Redford and Blanchett. The idea that journalists are held to a higher standard than the US President is an interesting one, and the film begins to explore it, but is not quite up to the task. 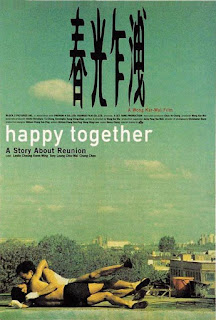 Happy Together (Wong Kar-Wai, Hong Kong, 1997) tells the story of two men from Hong Kong living in an abusive romantic relationship. Lai Yiu-fai (Tony Leung Chiu-wai) is the milder of the two, soft-spoken and loyal, despite the sometimes violent nature of his partner. Ho Po-wing (Leslie Cheung) sleeps with other men, and is wild and unpredictable, occasionally going as far as beating his lover. There’s a crushing moment where Lai admits in a voice-over that he loves Ho best when he is asleep, when he can just be with him, without having to deal with his mood swings.

The film is, above all, about loneliness. The title offers bitter irony, as we see these men dependent on one another, for fear of being apart. At first it seems arbitrary that the film takes place during an extended trip to Argentina, but the film points out this is on the opposite side of the world to Hong Kong. They’re as far as they can be from home. This is my favourite of the Wong Kar-Wai films I’ve seen, lacking the intense dullness of The Grandmaster (2013) and connecting visuals with emotion more successfully than In the Mood for Love (2000). The film’s visual style is deliberately grainy, but it still contains a beautiful colour scheme, all oranges and greens. I’m looking forward to seeing more from him.
Posted by Film Alert 101 at 16:48