The France that Duvivier found on his return was a different place. Harry Baur's rough handling in the Santé prison during the occupation had been fatal. Jacques Feyder would also die. Mireille Balin had been condemned for giving comfort to the enemy and was unable to work. Le Vignan had scarpered for Argentina. Now Duvivier found that the mantle of greatness that had engulfed peer directors René Clair, Jean Renoir, Marcel Carné or even the dreadful Abel Gance, had not descended on him.

However two of his regulars were still big time. He recruited Michel Simon and Vivienne Romance for a post war version of the Simenon “Fiancailles de M.Hire” story (filmed again by Patrice Leconte in 1989 as Monsieur Hire). It is the start of its director’s ultra grim movies -  ugly, with the director’s showy film craft and Simon’s arresting lead performance giving it its qualities.

The hostile tenement neighborhood is not all that far from the apartment block we’ll see in Pot Bouille (1957), with the families snatching their children away from contact with Simon’s reclusive, mean, Jewish M.Hire, who upsets the shop keepers with his finicky purchases. Hire observes the murder of an old neighbor from the windows of his room and finds killer Paul Bernard’s mistress, Vivienne Romance, coming on to him - referring her to a Dr. Varda, who turns out to be Simon’s business persona doing astrological charts from a rundown office.


The guilty couple plant evidence on Simon and manage to incriminate him to the point that the neighbors form a mob and swarm after him, causing him to flee across the roof tops and fall to his death. The gendarmes find the incriminating photo on his body while the shaken, pair are still racing around in the cars of the street kermesse side show - which makes a striking ending. Stark studio film making driven along with no attempt at glamour or sentimentality. Good feel for the oppressive community living. 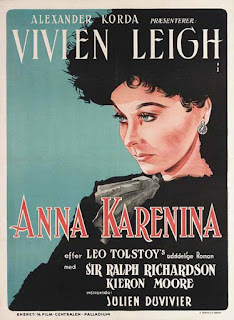 Struggling to regain his pre-war status as Britain’s most prestigious film maker, (Sir) Alexander Korda mounted a number of cosmopolitan literary adaptations, larding the mix with as many figures from contemporary High Culture as he could get on the pay roll - Jean Anouilh, Guy Morgan, Cecil Beaton, Constant Lambert and, as he always had, selecting internationally respected department heads to guarantee technical standards, Here note Henri Alekan on camera and Andrej Andrejew’s design. The British film union was asserting itself and watched without sympathy.

Korda was at odds with Duvivier whose adaptation transferred the setting to France and when that was put right, they ended up with what must be the most drab Anna Karenina of all time - which is going some. The film has one strength in Richardson’s Karenin who carries this one as he did other films of the era - notably Carol Reed’s The Fallen Idol and David Lean’s The Sound Barrier. The actor dominates and impresses but then all he’s got to compete with is Kieron Moore’s lack luster Vronsky replacing Laurence Olivier. Duvivier guides Vivien Leigh as she flutters ineffectually among all the production values 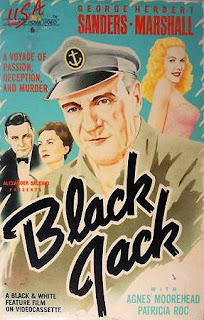 Duvivier’s final English language effort was minimally shown and it’s a bust as serious drama or action adventure - probably  the nearest the director came to doing one of those, with chases, punch ups, shoot outs and people who are not what they seem - as opposed to the European adventure film discussed here with La Bandera (1935).

This said, it’s not a one for the money throwaway. It aims to join the better films it echoes like Casablanca (Michael Curtiz, USA, 1942) The Third Man (Carol Reed UK, 1949), Rebecca (Alfred Hitchcock, USA, 1940), Del Daves’ forgotten To the Victor (USA, 1948), the Welles Othello (1952) - or even Stromboli (Roberto Rossellini, Italy 1950). There’s striking use of real locations - hotel foyers, Flamenco cafes, a giant Pelota stadium. Dalio makes his way through windmill country and George Sanders finds a survivor in a (remarkably well lit) limestone cave.

Lead George  is no more effective being rugged than he was in The Strange Woman (Edgar G Ulmer, USA, 1946),  Pat Roc trying to be Madonna-like just seems like she’s there to pick up the kids from footie practice and Dalio’s snivelling villain lacks menace. However the support assert themselves. Humanitarian Herbert Marshall’s and strident millionairess Agnes Moorehead’s play nicely off one another and Howard Vernon turns up belatedly.

Promising opening with the camera approaching the smoking rust bucket “Calcis” at sea. Turns out people smuggler Dalio is off to recruit Captain George in a flat hat and his ship “Black Jack” to solve the problem of Marcel’s boat load of illegals. George takes off the fee paying ones, stiffing Marcel on the deal, and tells him to land the rest on a deserted island where they become someone else’s problem. Stateless displaced person Patricia Roc is not impressed.

Back in Tangiers we learn about George considering ten thousand sub machine guns that actually fire. “For three years I was sucker enough to believe I was fighting the war for freedom.” Misunderstandings divide the romantic leads, with George forever implausibly giving away the proceeds of his evil deeds after Pat tells him about the drug addict crawling round the ship’s deck on all fours and she gets cast as Delilah in his down fall.

Studio close ups undermine the location shooting and the ship scuttling, with the sea flooding the hold and hands protruding from the hatch under water, is too graphic to slot in here.

Duvivier also has George try to do Harry Baur at the end of David Golder (1931)- fat chance! The Kosma score is recognisable but mainly hum drum. 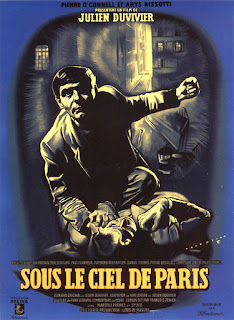 There’s a drabness creeping into the French cinema of the fifties which opened the door to their Nouvelle Vague opponents. You can see it in the gray streetscapes of this one or Carné’s L’air de Paris (1954).

The day in Paris done as a film à sketch is presentable enough entertainment, with
episodes that feature Brigitte Auber (soon in To Catch a Thief, Alfred Hitchcock, USA, 1955) as a provincial arriving in the big city, struggling med. student Daniel Ivernel or impoverished Sylvie trying to feed her cats. The open air dance scenes of  La Belle Equipe  (1936) and La Fete a Henriette (1952) are better than the one here. Another pedestrian is mowed down in crossfire.

La Fete a Henriette/ aka Holiday for Henrietta, aka Hettie’s Happy Birthday (!) 1952 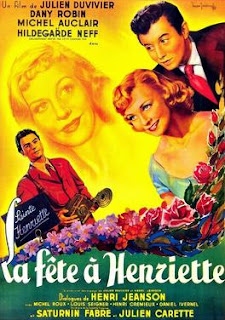 One of the most endearing of Duvivier’s movies, this one is an ingenious twist on his sketch format with a framing story in which scenarists Louis Seigner and Henri
Crémieux are traveling on a train fashioning the movie we see realised on screen.
Everyone picks up on the pair rejecting the plots of Bicycle Thieves and (significantly) Don Camillo among stories they spot in the newspaper.

The gag is that Crémieux keeps on injecting sensationalized material - sex, murders, chases - shown in Duvivier-characteristic, bizarre, tilted shots.  Seigner reigns him in to sculpt a nice little July 14th romance. The young(ish) leads are appealing,  Dany Robin at the peak of a career, which also included Litvak’s splendid Act of Love (1953), Michel Auclair and Hildegarde (K)neff doing a sexy turn as a circus lion tamer. Brazilian Diva Odette Laure, Carette and copper Daniel Invernel are in there too.

Roger Hubert images with Georges Auric score, in the era of his Cocteau films and an agreeable ending complete with fireworks at Sacre Coeur.

The material was re-treaded several times, including the Hollywood re-make Paris When It Sizzles (Richard Quine, USA, 1964) and the perverse Robbe Grillet Trans-Europ-Express (France, 1967). 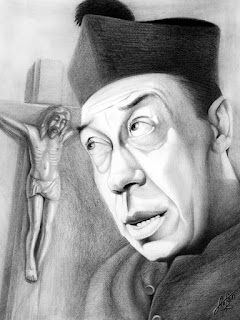 After his reputed loss of faith, Duvivier continued to get these Catholic assignments. In the Don Camillo films, the loudest voice is not that of the director, who set aside his grim world view to adopt the sunny one of then famous and successful author Giovanni Guareschi. His Don Camillo stories were a world wide publishing phenomenon of the day.

In the small Po Valley town, priest Don Camillo, a part that fits Fernandel like his
cassock, finds himself facing newly elected Communist mayor Peppone/ Gino Cervi, Blassetti’s long running leading man, who is not about to be to be up-staged. The comedy of outrage confrontations of Guareschi’s books are staged here with
Duvivier’s best professional finish. There is a nice vein of comic viciousness running
under the sunny surface, as where Mayor Peppone’s opening speech at the newly constructed House of the People is drowned by Don Camillo’s bell ringing and the visiting party man suggests they shoot the troublesome priest, only to be warned that they’d have to get him in the first round because he would return fire from the commanding position in the bell tower, or the climax scene where Fernandel alone struggles under the weight of the giant wooden crucifix to be joined by Cervi saying they are helping Him, indicating the wooden Christ, rather than the dogged cleric.

Add in the scenes of Fernandel in dialogue with Jesus, who got to be dubbed by Orson Welles in the English version.  The French copy of the co-production is said to be longer because of censor cuts in the Italian. Camerawork by Nicholas Hayer (Le Corbeau, Henri-Georges Clouzot, France, 1943 and Orphée, Jean Cocteau, France, 1950) and music by the Neo-Realists’ Alessandro Cicognini, with long serving Franco Interlenghi (the boy lead of Sciuscià, Vittorio De Sica, Italy, 1946), Sylvie and Germi associate Saro Urzi in the cast. 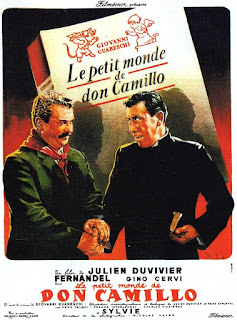 More of the same and equally enjoyable.

Banished to a poor, Godless village, Don Camillo (Fernandel) finds he needs his wooden Jesus and recruits Peppone (Gino Cervi) to retrieve it. He gets involved with the land owner who has built a dam which increases the misery of the poor locals and a boxing tournament, while the education of Peppone’s son is not going to plan.

The lead duo did another Don Camillo film under Carmine Gallone’s heavy hand and Fernandel continued in the role for two more movies, planning another. Gaston Moschin and Lionel Stander no less made one and Terence Hill also undertook the part. 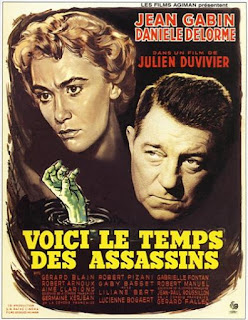 The bleakest of all the Duvivier movies. Les Halles restaurateur Jean Gabin is in a father relationship with student Gerard Blain until Gabin’s ex wife’s daughter Delorme shows up and wreaks havoc in both their lives.

Three older women, Bogeart the ex wife, mother Kerjean and housekeeper Fontan
generate plots that involve narcotic addiction, deceit and planned murder. This is not going to come out well.

The backgrounds are nicely caught, contrasting Gabin’s once classy restaurant and Kerjean’s seedy riverside cafe, where she tortures chickens. Half tone film making and performances are good but the atmosphere of  brooding malice doesn’t make for a pleasant night at the movies.

At least it’s better than Decoin’s 1952 La Vérité sur Bébé Donge, which appears to set the tone for these studies of grim middle age that Gabin was embracing.