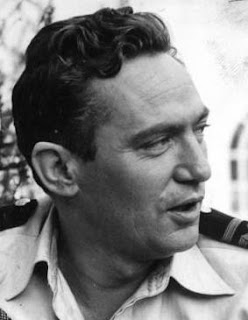 I'm not sure at what point a recent conversation with critic Peter Thompson moved from my bleat about a brilliant idea I had to honour Peter Finch, to Peter's advice that he had narrated, appeared in and consulted on the production of a feature length documentary about Finch's life. Huh. Who knew. So here goes with a catch up on an interesting archival project about one of the key players in the Australian cinema in the bleak years between the end of the thirties and the beginning of the seventies.

I think we both agreed that Finch remains the greatest Australian actor, the one who achieved the most, the one whose parts most challenged an actor's technique and the one whose range of parts made for, especially in retrospect, a most illuminating career. His dedication to the craft of acting is very much a key theme that comes out in Robert De Young's 2011  film Mad as Hell - Peter Finch. It's a good title, taking us straight to the speech that won him a Best Actor Oscar for Network (Sidney Lumet, USA, 1976) and reminds us that some things become emblematic, get absorbed into the quotidien cut and thrust of conversation and discussion, get resorted to by cheapjack politicians, comedians and journalists, among others, who want to make a point but then fall back on Finch and Paddy Chayefsky and Lumet for their supply of toxicity.

De Young's film takes us back to Finch's breathtakingly dysfunctional family life when as a young boy he passed along between relatives and through various countries. But its Australia where he started to make a living as a jobbing actor doing radio in a tuxedo and from the age of nineteen or so appearing in at least 8 movies. But the biggest break, and its amazing that there are photos, was being seen by Laurence Olivier and Vivien Leigh at a factory floor performance. The play was not Brecht or Clifford Odets by the way. It was Moliere's La Malade Imaginaire and the photos show Viv and Larry sitting in about row three of a makeshift venue presumably somewhere in Sydney's industrial west.

Finch was obviously a bit of a soft leftie at least, a conclusion borne out by the fact that he worked with Joris Ivens when the Dutch documentarian landed in Australia to make his short film Indonesia Calling (Australia, 1946). Finch did the narration and gets a designer's credit as well. De Young's doco doesn't refer to this by way.

By 1946, Finch's face was familiar and he had one great moment to his credit among all bits of pieces of dross. Given that some among us hold some of that dross in significant esteem I'm not about to re-open any wounds about that judgement. At this time, Finch had some great acting skills but was hardly leading man material let alone a star. His gaunt head with its elongated dome at the back, the early receding hairline, the prominent cheekbones, all on top of an impossibly skinny and somewhat shapeless body did not give him the stature of others like Grant Taylor or even Rod Taylor. Still he could act the pants off them all and there is no greater moment in Australian cinema than his recitation of Shakespeare's St Crispin's Day speech from 'Henry V'  as the soldiers prepare to face death in the African desert in Charles Chauvel's Rats of Tobruk  (Australia, 1944). (Then again, as one of the interviewees says, he became ever more handsome as he grew older.)

We few, we happy few, we band of brothers;
For he to-day that sheds his blood with me
Shall be my brother; be he ne'er so vile,
This day shall gentle his condition;
And gentlemen in England now a-bed
Shall think themselves accurs'd they were not here,
And hold their manhoods cheap whiles any speaks
That fought with us upon Saint Crispin's day.

Its a magnificent, tear-inducing rendition.

At the Oliviers' suggestion, Finch sailed off to London with Wife #1, a former Russian ballerina. Not long after arriving Olivier both gave him work and held him back. Orson Welles also ensured that Finch's Iago did not steal any of Orson's thunder as Othello by removing most of the character's lines from their stage production. Such is the acting life. He met Jack Lee for The Wooden Horse (UK, 19 and began a relationship that stretched to two more films together including the breakthrough A Town Like Alice, for which he won a BAFTA. He was thus the first Australian to win BAFTA and Oscar, a good trivia quiz question. Most would answer that only Russell ( a New Zealander) and Cate have done it. The footage of his BAFTA award is in De Young's doco.

Also included are a couple of scenes from a film titled Antonito  or The Day, a short film directed by Finch , assisted by his second wife Yolande Turner and made where they were living at the time on the  island of Ibiza, then part of Franco's Spain Where the production team found this one is not identified but the sooner someone puts it on at the Sydney Film Festival the better.

Which brings me back to that brilliant idea first mentioned over lunch to the relevant SFF person way back in 2005. The festival, I suggested should institute an award named after Peter Finch to honour the contribution of Australians to the international cinema. Such a gong would allow for a dazzling array of great Australians to be brought on stage and suitably cheered. Their appearance would be accompanied by a modest or otherwise retrospective of their work. It was, as the brazen pre-publicity for Godard's Bande a part  once declared " a sure fire success that will sell a lot of tickets". Nothing happened though a year or few later one of the local film magazines with pretensions to grandeur had its own awards going for awhile and it did indeed offer a Peter Finch Award. The magazine may survive (not sure) but its awards were stripped of their government handout and died a death.

Wheher that death was quite as sudden as Finch's is hard to say. On the top of the world with an Oscar beckoning he dropped dead of a heart attack at the Beverley Hills Hotel. He left behind a body of work which, with all the best will in the world is only lightly touched upon in this doco. The memories of a great man are however brought into sharp relief by various wives, friends and associates, his biographer Trader Faulkner (now sadly also passed so thus not available to do any SFF intros in case the idea is still on the back-burner) and especially by narrator and critic Peter Thompson (q.v. above) who has a most interesting story to tell of family relationships and inadvertent contact in all parts of the world.

So here's a parlour game. If there is a little retro to honor Peter Finch to coincide with his hundredth birthday on September 28 this year what should be shown. Perhaps just his Australian films but ncluding The Shiralee  (Leslie Norman, UK, 1957), A Town Like Alice, Jack Lee, 1956) and Robbery Under Arms (Jack Lee, UK, 1957). Or maybe broader to include The Man with the Green Carnation (Ken Hughes, UK, 1960), The Pumpkin Eater (Jack Clayton, UK, 1964) and a personal favourite Father Brown Detective (Robert Hamer, UK, 1954). There's a lot of choice, so much in fact that the doco under review has to skip by more than a handful of fine films. But it serves its purpose well in reminding us of a great talent who made his own unique way and overcame more than a few personal demons (alcohol especially) in getting there.