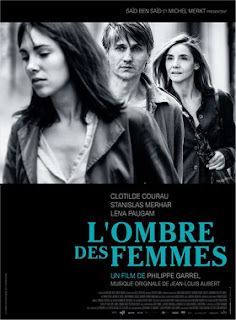 The Second of two pieces.
The French Film Festival remains a big ticket scene here - forty eight movies. On the plus side the booklet and celebrity comment trailer were nice this year but visiting film makers were sadly missed. You can query some choices and they don’t seem to learn.  Despite the fact that his drear Les amants réguliers (France, 2005) held the Academy house record for walk-outs they went ahead and programmed Philippe Garrel’s new L'ombre des femmes / In the Shadow of Women (France, 2015). I’m someone who lived through the sixties. They weren’t good enough to want to revisit them in these dim evocations when the festival had no space for example for Clément Cogitore’s admired Ni le ciel ni la terre (France, 2015).

For a while there it looked as if I’d already seen everything that was worth the trouble in the first week of the event. However Frogfilmfest came good when I got two exceptional movies on the same day.

Jacques Audiard’s Dheepan (France, 2015) has raised controversy on its home turf with the contrast between its depiction of grubby hostile France and sunny welcoming Britain. It’s one of a handful of films which tackle the refugee experience with conviction, whether you put it in with outsider views like Dirty Pretty Things (Stephen Frears, UK, 2002) or Emanuele Crialese’s great Terraferma (Italy, 2011) or participant cinema like La Pirogue (Moussa Toure, Senegal, 2012) and the Hong Kong film where they train the leads with street maps of Hanoi to pass themselves off as Vietnamese refugees. 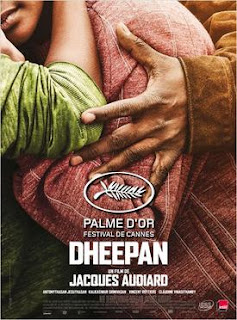 Here we kick off in a camp where Kalieaswari Srinivasan searches among the
refugees for the nine year old girl they need to complete the family listed on a dead  man’s passport they plan on using. The translator coaches leading man Jesuthasan Antonythasan on the back story he has to invent to be plausible for the interviewing authorities and the newly blended family are accepted as immigrants to France. There Antonythasan becomes janitor in a decrepit housing project, witnessing the violent behaviour of  gangs that he dismisses as less dangerous than the ones they knew in Sri Lanka - an observation that motivates the savage climax - the girl in the seat next to me was near hysterical watching that.

Paralleling the real life experience of its leading man, the film uses non pros and a
few familiar faces like Vincent Rottiers with unobtrusive film craft.  It appears to
have a straight forward narrative but also runs on a complex, conflicting perception of their reality by the characters - bogus father, mother, daughter, gang leader wearing a home detention bracelet and Tamil Tiger general. It may be considered Audiard’s best work to date.

You could not get a more different film to Samuel Bentechrit’s Asphalte / Macadam Stories.  Bentechrit has been off the radar since his passably eccentric black and white J'ai toujours rêvé d'être un gangster (France, 2007). His two subsequent movies have gotten little attention but now he’s back gangbusters. 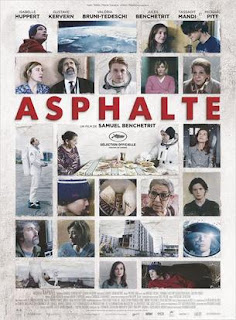 We kick off with another dilapidated housing  project, with a couple of skin heads
lounging at the entrance, and get into a meeting with the Body Corp, where Gustave Kerven (Aaltra (Benoit Delepine & Gustave Kervem, Belgium, 2004, Dans la cour (Pierre Salavadori, France, 2014)) gets a laugh by just sitting there. He’s the only one who doesn’t want to pay for a new elevator because he’s on the second floor. He’s excused with the proviso that he can’t use the lift. Impressed by the chairman’s exercise machine he gets one which puts him in hospital, to be sent back in a wheel chair.

Meanwhile the director’s son, as an abandoned teen, finds ex star Isabelle Huppert moving in next door and the space station insets lead to an escape pod landing astronaut Michael Pitt on the roof in front of the bemused skin heads. He shelters with Arab mother Tassadit Mandi who pretty much steals the picture (she’s also glimpsed briefly in Dheepan) turning him out in her imprisoned son’s Marseilles soccer shirt and feeding him couscous, without them having a common language. Kerven’s enforced nocturnal life style brings him into contact with night nurse Valeria Bruni-Tedeschi rounding out the small on top of their game cast.

This one is pretty much unique though it’s been compared inadequately to Woody
Allen and Jim Jarmusch. It’s enormously enjoyable and likable, which makes a
change.

Notice that three by four, the old Academy frame, is creeping back - Imax films,
Carlos Reygadas and Grand Budapest Hotel (Wes Anderson, USA, 2014). They use it here for the body of the movie, the image only going into wide screen for Huppert’s video audition, where her performance is modified under Bentchiret the younger’s direction - a considerable set piece in itself.

Belle & Sebastian : the Adventure Continues was better than it needed to be for  a sequel to a popular kids entertainment spun of the book by Cecile Aubrey, who was once H.G. Clouzot’s Manon.

Their adventures include the plane crashing, Belle fighting an agro bear which could have strolled in from The Revenant and Neuvic using dynamite to blast a path through the fire, the way he learned from WW2 Americans.

Impressively filmed scenes of Alpine life, great air to air material (it looks authentic) and the depiction of the forest fire would all be notable in a production aimed at any age. The cast are all more than equal to the task. We can chalk this up to strong production values and the injection of  Cristian Duguay jobbing director of the surprisingly accomplished Wesley Snipes Art of War. Pity the kid film conventions bend plausibility. Someone should have given that brat a good thumping every time he put someone’s life at risk. 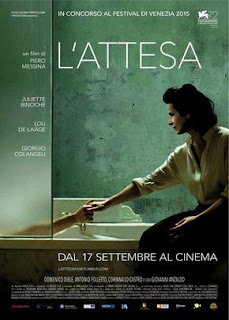 L'attesa /The Wait (Piero Messina, Italy, 2015) soon gets to the half close up of Sicilian mother Juliette Binoche with the sound of hammering - crepe being nailed over the mirrors where the family have gathered for a funeral. Binoche’s son’s French speaking fiancée Lou de Laâge is driven in and the film gets to be about the two women (“Sono suo madre”). Language switches from Italian to French as Juliette delivers the film’s central lie. They stress the contrast of the pair - Lou swimming in her scanties which Juliette refuses. “I’m used to seeing some parts of my body only in the dark.”

Two strong lead performances, great images and a remote link to Pirandello but does it have to be so boring?

Director Piero Messina was an assistant on Il Grande Bellezza (Paolo Sorrentino, Italy, 2013) Italy, and he wants us to know it, with significance writ large - for openers the somber lit Christ on the crosswhich foreshadows the Madonna we see being trucked in for the Sicilian religious festival, with the penitents in KKK hoods. However he film is really a clearer demo of the lingering influence of Antonioni with static still photo like insets - the pink inflatable mattress blows about the courtyard of the so nice beige wall villa, the distractingly appealing meal run up from home made carob flour pasta, two glasses on their side roll on the table, a helicopter scoops water out of the lake, the distant hair pin bends with no traffic on them.  It’s even got a missing lover - I mean - Jeez.

Claude Lelouch is the great survivor of French film and, despite aberrations like his dippings into mysticism, he’s provided an enormous amount of quality entertainment. Hopes were high for Un + une (France, 2015)  in which the shape of  his Un homme et une femme (France, 1966) can be vaguely seen. 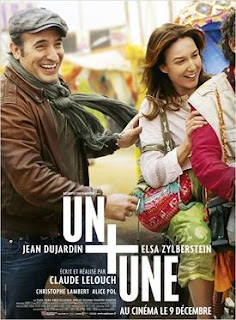 It kicks off with ‘Scope shots of pilgrims bathing at Benares and shifts into the failed Indian Dance audition and a non sequential coverage of a Silver Store robbery and chase intercut, the two becoming the subject of a B&W Juliet & Romeo production by Oscar winner art film director Vohra who hires in French movie musician Jean Dujardin to score it. Elsa Zylberstein shows up sitting next to Jean at French Ambassador Christoph Lambert’s dinner and we get to the concept of her spirituality against his pragmatism, with Elsa off to enable her to have a child after being hugged by famed woman healer Mata Amritanandamayi Devi.

Jean is diagnosed with the life threatening tumor and follows to the healer, catching up with Elsa a rail station and traveling by train, bus and small boats through all the scenics. The leads are ultra charming but  all the will they or won’t they strains patience.

Coda has Jean encounter Elsa on the so nice house boat. It stops at the start like Toute une vie (Claude Lelouch, France, 1974).

Un + Une arrives full of set pieces like Dujardin asked by Zylberstein how he’d put music to their real life encounter and his suggestions being used as the scene runs or action broken up with unexpected flashbacks - Jean finding his birth dad, aged “raté” one time body builder hunk Venantino Venantini begging in a restaurant, Alice Pol seeing the leads in bed and firing a few rounds into them, Lambert meeting possessionless Elsa as he drives out of the closed French embassy.

Technically exceptional - great 'scope images, Francis Lai score, the monochrome film in a film getting video vignetted into subsequent action. It’s kind of like thumbing through a glossy woman’s magazine for two hours.

Julie Delpy was such an endearing presence that it would be nice to find her films as director were equally appealing - or at least better than the new Lolo. It starts out as a glossy rom com with long divorced sophisticated Paris designer Julie on holiday in Biarritz, where she gets to meet local Danny Boon when he dumps the giant tuna caught for the barbecue that night in her lap. They make out, with her seeing him as a hoon fling only to find herself jumping on him at any opportunity and the pair setting up together when he moves to Benugravelle in Paris with an impeded view of the Eiffel Tower. So far soso with the talking dirty with friend Karen Viard the best element.

However the film takes a right turn with the introduction of  Julie’s nineteen year old
son Vincent Lacoste, who turns out to be a “vrai psycho” sabotaging mum’s relations with men since he was in kindergarten. I didn’t like this format all that much inTanguy a few years back. George Coraface shows up briefly as Viard’s Greek squeeze. The talented cast deserve better material. Best element is location filming with material shot in the Pompidou Centre, Place de la Republique, Paddington Station etc. I’ve got a few more films to go but it’s too much of a gamble to go on ploughing
fifteen bucks a time into undocumented material. It’s possible that I missed the best - or the worst - of the near fifty titles on offer but what I did catch confirms the notion that French film remains the most approachable national cinema, the one stacked with the most personable players and film makers willing to mount popular product around them and when they come up with Le Tout nouveau testament (Jaco van Domrael, Belgium/France/Luxembourg, 2015) they are holding their own with anything else being made now.
Posted by Film Alert 101 at 05:51