Neil McGlone writes on his blog: On the eve of the UK release of Ben Wheatley’s eagerly anticipated filmed adaptation of J.G. Ballard’s novel, HIGH-RISE, I am exclusively posting the entire transcripts of a series of interviews that I conducted with the cast and crew of the film for the British Film Institute film magazine, Sight and Sound. The magazine’s editor, Nick James, has kindly given me permission to post these in full, extracts of which can be found in the April edition of the magazine. The content of all these interviews remains the copyright of Sight & Sound.

Click through on the link above and you will find the full transcript of Neil’s on set interviews with director Ben Wheatley, producer Jeremy Thomas, star Elizabeth Moss,  and Mark Tildesley, Laurie Rose & Nick Gillespie, Odile Dicks-Mireau, Luke Evans and Tom Hiddleston. 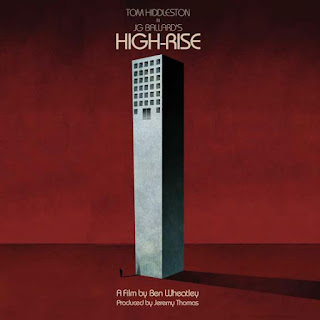 Ben Wheatley hardly rates on the radar in Sydney. I’m not even sure which if any of his films have had public or even festival screenings.  On the other hand I think that MIFF has shown all, if not most, of his films and no doubt audiences in the great southern city will still recall the thrill at the unleashed violence and the drollery associated with Down Terrace (2009), Kill List (2011), Sightseers (2012) and A Field in England (2013). Now, after directing the opening episodes of the latest series of Dr Who, Wheatley’s most ambitious project is about to premiere in the UK, an adaptation of J G Ballard’s “High Rise” with stars Moss and Hiddleston to give it a public supercharge. Read all about it.
Posted by Film Alert 101 at 05:18