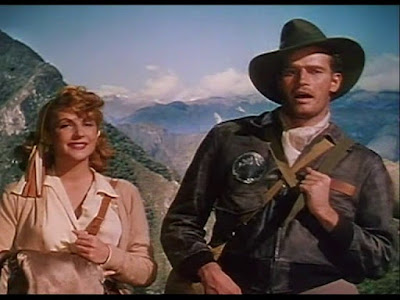 Chuck Heston, still typecast by Paramount, here as a travel driver in Peru and hunk for rent to middle aged tourist wives, with Nicole Maurey in her hoped for break though English language debut.  (Both above).

They’re observing from the relative safety of the Paramount backlot in Wilshire Blvd the newly discovered Incan city of Machu Picchu back in 1954's Paramount thriller, Secret of the Incas, directed by an able Jerry Hopper in part to cash in on the growing interest and fame of that great discovery. 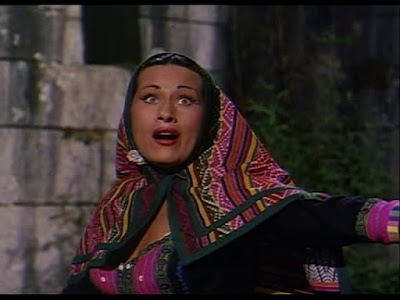 The further but even more fascinating object, still hidden until the 45 minute mark appears in the third screen in the form of 50s "exotic" music sensation Yma Sumac (above), who broke onto the music scene bigtime with her early 50s Capitol albums, Voice of the Xtabay and Legend of the Sun Virgin, with scores by Moises Vivanco and (my own favorite) the far more commercial Les Baxter, which massively adorn the movie and take it to another level of "exotic" kitsch.

Call her camp or call her phony, those tales of her actually being Amy Camus from the Bronx are no more ridiculous than some of the "Achievements" she and her "Discoverer", Moises Vivanco are supposed to have claimed, like her allegedly "Royal" link to a line of original Incan Princesses. Still if you’re a pretty soprano with a four octave range, why not?

But such foolishness merely amplifies the texture of Hopper's movie, bringing a touch of the Incan gods' revenge to an otherwise routine work of cold war kitsch with the good guys (Chuck, Nicole), the commies (Robert Young), and the usual plunder for lost treasure, a plot device that seems to have come out of Carl Barks’ 1954 Donald Duck comic, “Lost in the Andes.”

The thing is, without Yma's opening track "Ataypura" vocalised over the credits and repeated later during the movie with Yma in Incan drag darting in and out of papier maché rocks the movie wouldn't be worth even half its weight in sheer interest.

In this YouTube clip she sings the same number from backlot set playing to location for the second unit camera, assisted by a heavily Egyptian dusked Michael Pate playing her brownface "attendant"

The title is included in a newly released six movie early Heston boxset from Madman, Australia.