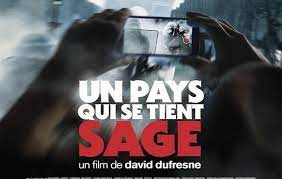 The Tale of a Flawed Democracy

Borrowing its starting-point from the German social theorist, Max Weber – “The State lays claim to the monopoly of the legitimate use of violence” – David Dufresne’s polished, attention-grabbing documentary offers a provocatively thoughtful approach to its subject. The topic is the ways in which French authorities have gone about legitimising the use of violence to suppress dissent and what that might mean for French democracy (and for governments elsewhere).

Equal time is given to footage of clashes between police and demonstrators shot on the streets of thirteen French cities between November 2018 and February 2020 and to a wide range of citizens offering their views about what we see and the lessons it provides. When Defresne shows us the violence, he generally does so by way of quoting those who’ve used their phones or cameras to shoot it or in order to lay the groundwork for a debate about it and its implications.

Some of the scenes are shocking, but he can hardly be accused of sensationalism. His interest lies in what it all means. When he uses footage of the violence, he generally does so by way of quoting those who’ve used their phones or cameras to shoot it or in order to lay the groundwork for a debate about it and its implications. “I prioritised sequence shots and I didn’t use music, slow motion, zoom effects or fast-cut editing: we kept it as sober as possible,” he told the  cineuropa website.

Dufresne explains in the cineuropa interview that he set out with a solid framework in mind. “On the one hand, in terms of images, believing in some sort of cinéma vérité, in a new form of cinéma brut, and on the other, believing in language, in words, in conversation, in the dialectic.”

To make the film, he gathered together individuals from many walks of life: scholars, blue collar workers, mothers-at-home, journalists, social workers and a couple of representatives of the gendarmerie (they’re all identified at the end, where there’s also a list of all the police and government officials who declined to be involved). And he either has them debating one-to-one about how best to make sense of the footage or offering comments direct to camera. The results are compelling. “The idea was that they should want to talk, to discuss things,” Defresne says, “to reflect and to listen to one another, even if they weren’t in agreement.”

Some of them have been wounded during the violence that we’re shown – hands blown off by police grenades, patches covering injured eyes – and tears are occasionally shed as they recall what took place. Sociologists and historians cite various political thinkers – Weber, Hannah Arendt, Jean-Jacques Rousseau, Machiavelli, Pierre Bordieu, Guy Debord, Pasolini – and reflect on the escalating “gilets jaunes” movement that took its protest to the streets across France in recent years.

Fallback aphorisms like “the importance of maintaining order”, “the use of legitimate power” and “the right to public thoroughfare” are sprinkled throughout the conversations and commentaries. A thwarted protestor (supported by the footage) recalls how she and her friends were brutally assaulted by police, explaining how their attempt to find a way to express their dissent peacefully had led them into what felt like “a guerrilla war”. A demonstrator concisely explains how laying siege to buildings, to businesses, ought to be seen as a challenge to the authority of the state.

A woman reads from an eloquently written document written by Brazilian archbishop Hélder Câmara about the differences between three kinds of violence: institutional, revolutionary (“born of the will to abolish the first”) and repressive violence. A sociologist reflects on the way that increasingly sophisticated cameras have enhanced the capacity for oversight, whether they’re wielded by police or protestors (“Nothing is hidden”).

A general in the gendarmerie proposes that the police need to be seen as victims too, of politicians who fail to understand that they need to remain at arm’s length from law enforcement. Monique Chemillier-Gendreau, an 86-year-old Emeritus Professor of Public Law at  the Université Paris-Diderot (and, for me, the star of the film), draws it all together in ways that are unlikely to make anybody feel comfortable: “Democracy is a horizon,” she says, “the view of which is concealed by a screen of false democracies that get in the way.”

There’s no question where Dufresne’s sympathies lie. But it also becomes clear that the circumstances he’s showing us and their ramifications are far from simple. The protestors are clearly subject to outrageously ferocious attacks by the highly trained and well-armed police, attacks that go far beyond the need to maintain order. But the officers are also strategically targeted by groups among those who are demonstrating. There’s footage illustrating this too and it’s a pity that those who could have elaborated on it have chosen to remain silent (perhaps because they may have been also confronted by other difficult questions).

The film’s French title is Un pays qui se tient sage, which translates as “A Country Behaving Gently”, making reference to a scene in which the camera looks over a large assembly of students from a high school in Mantes-la-Jolie, all kneeling with their hands on their heads. Behind the camera is a policeman who’d been involved in their arrest after street protests near their school. On the soundtrack, a voice smugly quips, “Now here’s a class behaving gently.”

Showing at MIFF in cinemas and online. Tickets available and a link to the film's trailer if you click here