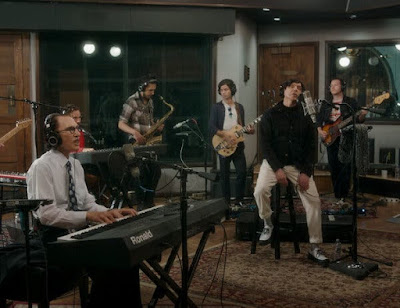 In a riveting opening sequence (image above), director Leos Carax is in a studio control booth with his daughter, directing his screenplay-and-music writers Ron and Russell Mael as they start performing “So May We Start”.

The Mael brothers (aka pop/rock/art musicians Sparks) with their backing group then sing their way out of the studio and collect the three main actors, Adam Driver, Marion Cotillard and Simon Helberg.

Ending up on a street in Santa Monica, Henry McHenry (Driver) heads out on a motorbike and Ann (Cotillard) collects her limousine. They drive to their respective gigs – Henry to perform as a cutting-edge, confrontational comedian and Ann, to the opera where she sings with a voice from the angels.

The rest of the opening act sets up their mercurial love affair and their marriage, all undercut by McHenry’s disturbingly anti-comedic stand-up comedy routine. At this point, you might start to wonder how this will hold your attention for 140-minutes.

Or whether you’ll just turn into another member of McHenry’s all-singing Greek chorus audience who spend most of their time abusing the egotistical ‘comedian’.

But hang in there, everything changes at the start of the second act with the arrival of Henry and Ann’s first and only child Annette, played by a superbly rendered puppet.

The late, great UK film director Anthony Minghella directed only one opera – Puccini’s Madama Butterfly- and it opened in London in 2005 at the English National Opera.

After a competent but hardly outstanding first act, a restlessness was discernable throughout the Coliseum Theatre audience, especially from my companion next to me. Where was the magic?

That all changed in the second act, however, when a beautiful, mesmerizing puppet arrived on stage playing Butterfly’s young son (image below). From that moment on, the opera soared and touched the sky.

It’s much the same with Carax’s Puccini-like dramatic arc to Annette. His visionary and audacious direction and the puppet borrowed from Minghella’s opera, allows him to counteract the masculine malevolence of McHenry and the operatic tragedy of Ann, with the poignancy, humanity and wonder of the otherworldly child.

There are many references along the way to a culture broken by domestic violence, mindless celebrity, #MeToo, death wishes, child exploitation, tortured relationships and more, but in the end, like all great opera, Annette thunderously and movingly explores tragic love and ends in the ruination of its protagonists.

It’s not for everyone but I suspect Anthony Minghella might have loved it…although maybe looking for his credit.

Annette was the opening selection for Cannes 2021. Leos Carax won the prize for Best Director. The film opened in cinemas that are open in Australia yesterday August 26. Locked down cities later.