Melbourne International Film Festival and from September 2 in Cinemas - Rod Bishop welcomes "a mother lode" SUMMER OF SOUL (…OR, WHEN THE REVOLUTION COULD NOT BE TELEVISED), (Ahmir-Khalib “Questlove” Thompson, USA, 2021) 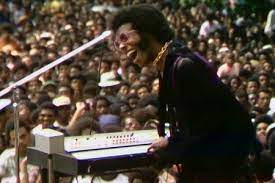 A heavy metal guitarist from Baltimore came to visit. The son of an old high school friend of mine, he had an interest in art, so we took him to the Art Gallery of NSW.

Over lunch we were discussing music when one of the young waiters overheard us. Ignoring the visiting Tom Cruise lookalike from Baltimore, the waiter launched into us, his aging hosts:

“You got to see everyone back then, didn’t you? It’s disgusting. I was born way too late. Did you see Pink Floyd, Led Zeppelin, Mahavishnu, Santana, T Rex, Nina Simone and Frank Zappa?”

“All of them”, I replied: “We even saw The Four Tops, AC/DC supporting Lou Reed and The Rolling Stones on the same bill with Roy Orbison”.

The 1960s and 1970s produced such musical riches there are still consummate bands and performers from those times to be discovered 50 years later.

But Summer of Soul is on another level. It’s a mother lode.

A black music festival in Harlem held over six days in 1969 with some dates even crossing over with the Woodstock Festival in upstate New York.

A local television station recorded 40 hours of the concert material but the producer, the late Hal Tulchin, found no-one was interested in its commercial possibilities. The footage has languished, unseen, in his basement for the past 50 years.

The performers include B.B.King, Sly and the Family Stone, Stevie Wonder, Nina Simone, Mahalia Jackson, The 5thDimension, Hugh Masakela, Babatude Olatunji, Gladys Knight and The Pips, David Ruffin from The Temptations, Clara Walker and The Gospel Redeemers, Herbie Mann, The Chambers Brothers, Papa Staples and the Staple Singers, The Edwin Hawkins Singers, Ray Barretto, Mongo Santamaria and Max Roach. Jimi Hendrix asked to be included but was turned down. The NYPD declined to provide security but The Black Panthers gladly accepted the gig.

It’s not just the well-known acts who are uniformly brilliant, but also the exhilarating gospel singers; the Puerto Rican, Cuban and other Caribbean performers; and the 300,000 who attended during the summer of 1969.

Great as the music is, first-time director Ahmir-Khalib Thompson (aka the musician Questlove) contextualizes 1969 in the African-American struggle. It was the year The New York Times first used “Black” instead of “Negro”, or as Al Sharpton puts it: “when the Negro died and Black was born”. The Apollo II moon landing occurred during the concerts but every audience member interviewed just laments all that money wasn’t spent on poverty (“Whitey lands on the Moon”).

The Civil Rights movement turned into Black Power and Summer of Soul testifies to the political and cultural transformation of the times. Towards the end, the formation of black identity is explicitly delivered by an electrifying Nina Simone performing - for what appears to be the first time - “To Be Young, Gifted and Black”.

Both sessions at MIFF sold out.