The inimitable Badger Books, Sydney's best kept secret  bookshop, has released its latest catalogue with this splendid item for a cinephile collector 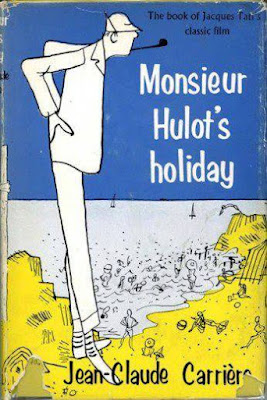 One of the more unlikely novelisations of a movie written by the distinguished screenwriter, illustrated by Pierre Etaix, and endorsed by the director on the rear panel of the dustwrapper.

Publisher: William Heinemann. First English edition. 1959Edition: First EditionPlace Published: London
Extremities darkened, else good in dustwrapper chipped at edges.
Its one of dozens of rare items in a catalogue described thus:
Welcome to our new catalogue of what is becoming an annual roundup of translated literature. Novels and collections of stories dominate: from Albania to Turkey and twenty countries in between. You’ll also find: essays, travels, journals, memoirs; dreams collected by an on again off again Surrealist; signed books by a couple of Nobel prize winners; aphorisms; hardboiled French crime; the original, uncompromising text of Pinocchio; foundation texts of Nordic Noir; poetry; a familiarity with the Tasmanian wolf; philosophy; key moments from Leonardo Sciascia’s unauthorised history of Sicily; Jacques Tati’s Monsieur Hulot’s Holiday by Jean-Claude Carrière, one of the more unlikely movie novelisations; the oulipian Penny Borough of Ourselves; and Peter Owen’s own one volume catalogue of translated literature.
To view the whole catalogue online  JUST CLICK HERE
Posted by Film Alert 101 at 05:24