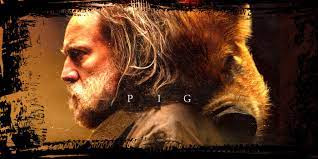 Pig’s film career had an auspicious cast in 1927 with a major supporting role in Murnau’s Sunrise. Cast as a fairground attraction, Pig caused havoc by escaping from her show booth, to be chased by George O’Brien, across a dance floor, through a line of hastily withdrawn silk stockinged legs, into the kitchen where one of the drunken waiters drops that bottle of wine he was taking more sips from than he should.

Pig’s next big role wasn’t in person but was as one of three little pigs for Walt Disney about six years later. A generation later, though still only appearing as an animated character, Pig was Napoleon in Animal Farm,where the story presented  him as a surrogate Stalin. She had to wait until 1995 to again have a starring role and to have her good character somewhat restored when she hadthe title role as Babe.

After another long break between roles, the last year or so has once again seen her back to the spotlight. Gunda even let her just be herself. Now she’s back not only in a role above the title, she is the title! Pig.

Too often, Pig feels she’s been given a bad name. There are those cultures who regard her as unclean. And there is the political slur when she is associated with Pork Barrelling. That unethical practice of unscrupulous politicians pouring funds meant for the whole community into particular areas or projects where they hope to corrupt votes by doing so – Pig was distressed that this was associated with her and was seen as a bad thing.  Though she does take heart from a comment in the September issue of the Monthly, that at last a Government is wearing it as a badge of honour because the Nationals say it shows they’re shoving it to the Latte drinking city dwellers who get upset by these things. 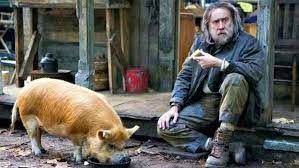 Now Pig has a film named solely for her – Pig.  And she gets to appear along with Nicolas Cage (picture above).  Although they don’t have many scenes together, because the point of the film is that she gets kidnapped (pignapped?) because she’s a wonderful truffle pig.  This draws Cage out of his shaggy, mumbling state because nobody’s going to take his truffle pig and get away from it.  It’s more than the theft of his bread winner. Pig is like family!

The search for Pig leads him back to Portland, Oregon where we can start to piece together his backstory, why he went from being one of the city’s top chefs to this shaggy bum living alone in the forest with a pig.

The film is strong on atmospherics. Whether it’s the hermit life in the forest, the seedy dives of Portland, or the over-the-top luxury of the town’s wheeler dealers. But this emphasis on atmospherics comes somewhat at the expense of explanations and coherence of story. Cage is a strong presence, but there’s a sense where he relies on this presence to deliver what is really a shallow characterisation relying on wild, untamed hair and beard and matching clothes rather than a psychological performance.

The mixed music score also resorts to laziness at times. The Lacrimosa from Mozart’s Requiem and the Bell Song from the opera Lakmé,  beautiful  as they are, are too often cliché in movies.  There’s a bit of an attempt to present them as diegetic, but so what. The minute we hear them we understand this is meant to be Moving (with that capital letter.)

Pig  is generally entertaining. It’s a slightly different twist in a revenge story. But when it’s over there’s a sense that the atmospherics were good, but did it really amount to much more?