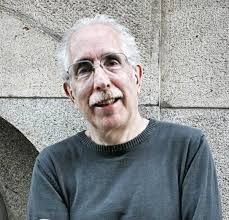 Mark Rappaport (above) was someone I met once, at Edinburgh in 1980, when I invited him to send his film Imposters  to the 1981 Melbourne Film Festival. Too late.  He had already agreed to send it out to Claudine Thoridnet’s Adelaide Film Festival and in those days, and I’m not going into any further detail, the Melbourne and Sydney Film Festivals got very sniffy about films that had already played somewhere else, especially like Adelaide or Perth, in the wide brown land.

So that’s out of the way.

But my big Mark Rappaport comeback started a little while ago when the Munich Film Museum put up an online exhibition of Rappaport’s films. Way back in 1980 he was already a major figure in US indie cinema and the Munich exhibition reminded us that he has remained so for more than four decades. Among the titles in the Munich online show were items that went back decades. I posted a blog item about this early effort to overcome the lockdown blues that were worldwide at the time.

Since then I have become interested in the major turn that Rappaport has taken and continues to take in producing what I guess are now called audio-visual essays. He is not alone in exploring the field. It has become cinephilia on steroids, a crowded area where the quality Blu-ray, DVD and streaming services regard it as a serious selling point to have major critics doing intros and associated material about newly-released titles. It gives those editions some cache. Even the local distributor ViaVision on its Imprint Label has taken to beefing up its releases with some superb ancillary material, none more so than Tony Rayns straight to camera intro on the recent superb edition of Howard Hawks’ Scarface  a tour de force of informative background about Hawks and Ben Hecht, production conditions, gossip and enlightened commentary on a landmark film in the director’s career.

Rayns has also contributed a piece to the latest issue of Sight & Sound, newly revamped, which devotes itself to the most recent phase of Rappaport’s  film-making, the period from 2014 when “he switched to digital tech and reinvented himself as a video essayist, most of the time exploring byways of film history: overlooked and forgotten careers, narrative strategies, suppressed identities, hidden meanings.”

By chance I was just presented with copies of three of Rappaport’s most recent essays, all up an hour of film. L’Année Dernière à Dachau, The Stendhal Syndrome or My Dinner with Turhan Bey  and Two for the Opera Box. They have a range.  The last mentioned is cinephilia rampant, an appreciation of the efficiency of the studio system via an examination of MGM’s permanent set of a theatre/opera house that Rappaport’s eagle eye spots being used and re-used in The Bad and The Beautiful, Two Weeks in Another Town, The Bandwagon, Scaramouche, Give a Girl a Break, Deep in My Heart, The Barkleys of Broadway, Interrupted Melody, Kiss Me Kate  and Torch Song. Put your hand up if you noticed. Put it up again if you noticed the same Chinese screen used in both The Cobweb  and The Opposite Sex. Rappaport did.

L’Année Dernière à Dachau is a meditation on memory and the past and the cinephiliac impulse is strong. Rappaport reveals that the chateau where Marienbad  was made is the same location that Stanley Kubrick used for his exteriors in Paths of Glory. He cleverly connects the two films by elisions and montages joining Kirk Douglas and Delphine Seyrig (below). But the crux of this exploration is the re-use of footage which connects Resnais’s film to his earlier Night and Fog. The location for Marienbad turns out to be just 8 kms from Dachau. So we have a film that utilises 8mm  footage shot by the bit player actress Francoise Spira, footage previously assembled by film-maker Volker Schlondorff, comparative sequences between the Resnais and Kubrick films, and an homage to Delphine Seyrig’s career and her politics as she employed them in  selecting her roles. It’s a heady mix that makes a half hour rocket by. 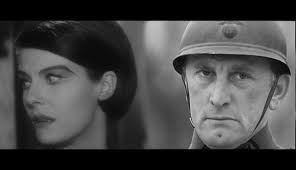 The Stendhal Syndrome or My Dinner with Turhan Bey, rescues from obscurity a handsome actor with an exotic face who spent most of his life playing slick second level characters. They tanned him up on more than a few occasions to play an oriental or as they say a person of Middle Eastern appearance. Rappaport had a crush on him and yet again he selects a panoply of sequences, some of them photoshopped, if that’s the word, to make the insight more telling. It did remind me just how much I had enjoyed one of Bey’s meatier parts in The Amazing Mr X Bernard Vorhaus’s slick thriller about a fake medium.

So…What followed after the hour long viewing was completed. By the time of Two for the Opera Box I was making lists of the films. That one heavily featured the work of Vincente Minnelli. A quick check of the shelves revealed that most of any we have are far away. What popped out were Lust for Life and Brigadoon. No opera boxes or scenes set in the permanent theatre set in either of those. But Brigadoon does have one of Gene Kelly’s greatest songs…(and Cyd Charisse singing The Heather on the Hill). You can check out Kelly's number if you click on this YouTube link. You may already be one of more than 400,000 people who have viewed it but look again for the sheer simplicity of the sequence. Superb song, one of Kelly’s trademark solo dances and the whole thing, lasting 4’22”, done in seven shots.