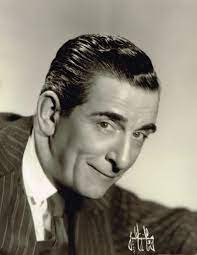 To think of Edward Everett Horton as little more than the Hollywood character actor of the '30s is to think too narrowly.

Horton had an acting career of nearly 70 years, which speaks of longevity, both genetic and thespian.  He was singing, dancing and acting in vaudeville from 1906 (at age 20), and in movies from 1922 - not yet talkies; but, until the talkies arrived, providing much practice for the funny faces and double takes of later years.  He made more than a hundred movies.  The programme describes him as  “America’s most beloved comedian”, but even for a theatre programme that's a big stretch.  At the time he was lively enough, and well able to put over the stage "business", but he was then 76 and nearing the close of his career.......although he did live for another eight years and for another half-dozen films.

Nina had its origins in the 1949 French-language play of the same name by Andre Roussin, and arrived at the Melbourne Tivoli, in the translation by Samuel Taylor, for a season commencing 30 April, 1962.  Taylor had success as the playwright of Sabrina Fair and The Pleasure of His Company, and wrote a number of film scripts.  His obituary (he died in 2000, aged 87) describes him as an American playwright in the tradition of Philip Barry, and Kaufman and Hart, and alludes to the time, through to the late 1960s, "when witty well-made drawing-room comedies about rich people were a staple of both Broadway and the West End".  Not surprising, then, that Taylor chose to translate and present a play fitting this profile.

But I doubt that Nina would be staged today - it has not worn well. And I doubt it was up to much in 1962, although no overall impression has stayed with me. Indeed, if the following synopsis of the opening scene is an indication, then Nina was of less substance than either froth or bubble:

Shortly after the curtain goes up Nina's husband confronts Nina's lover with a revolver. He comes to do his duty as the protector of the social order. But he has, unfortunately, taken a bad cold, and finds he must hand over the gun to the lover while he fetches the necessary medication from his pockets.

A concluding bit of trivia. In 1925 Horton bought a property in the Encino district (later suburb) of Los Angeles, a bit less than 20 miles from the city centre.  He lived there for the remaining 45 years of his life.  "Belleigh Acres" accommodated separate residences for his brother and his sister, and their respective families.  Unfortunately for Horton, part of the estate was compulsorily acquired in the 1950s for construction of a freeway.

Editor's Note: The Original Broadway production opened December 5th, 1951 at the Royale Theatre in New York City and ran for only 45 performances. The play starred EDWARD EVERETT HORTON as "Adolphe", COLLEEN DEWHURST as "Nina" and JAMES VICKERY as "Gerard"