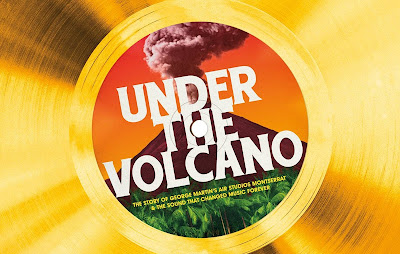 At the southern end of the Caribbean island of Antigua is Crossroads, a drug treatment centre founded by Eric Clapton. With a commanding cliff-top position, it’s a sort of local tourist attraction along with the family homes of fast bowlers Andy Roberts and Curtly Ambrose and the historic English Harbour.

Look out to sea and the closest island is Montserrat, once the location of the AIR recording studios, operational between 1979 and 1989 and built by the legendary Beatles producer George Martin (below). 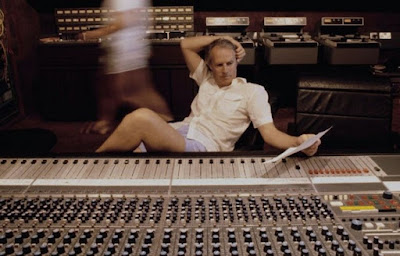 Montserrat and Antigua are very different places. In this documentary, Montserrat is described as “not like Antigua”, as far more “innocent” and “quieter” with “gentle people” and “no need for security”. Anyone who has spent time on Antigua is unlikely to describe that island in the same way.

Despite Montserrat’s idyllic setting and its empathetic locals, many wondered why “George Martin chose a volcanic island” for his state-of-the-art studios. Jimmy Buffett recorded his album Volcano there in 1979 with the prophetic line: “I don’t know where I’m a gonna to go when the volcano blows”.

The roll call of performers who recorded at AIR studios also included Stevie Wonder, Paul McCartney, Elton John, The Rolling Stones, Dire Straits, The Police, Duran Duran and Earth, Wind and Fire. All testify to having had a very nice time indeed.

Those who didn’t, like Lou Reed and Black Sabbath, prefer urban grit for their creative environments, not this tropical “chill”. The Police seem to have loved it at the beginning, but “it became a living hell” and the “three alpha male” musicians all had divorce proceedings start while recording on the island.

The local Montserratians weren’t overwhelmed by the visiting musicians either (“only by athletes and cricketers”) and their party lifestyle was a more than a match for the internationals. In this doco, they also take time to talk about their music, known as Soca, a party music if ever there was one. Having a good time with music is at least one thing they share with their neighbours on Antigua. I once saw the Antiguan band The Burning Flames start a Soco set around midnight on a recreational ground and when I left four hours later, they were still at it, no breaks between songs, just a continuous stream of party music.

This is an Australian film, directed by Gracie Otto and supported by Screen Australia, Screen West and Screen NSW. The archival research is extensive (despite oddly leaving out Australia’s Little River Band who recorded on the island in 1981). The new interviews are both comprehensive and entertaining (particularly those with Sting, Stewart Copeland, Midge Ure, Mark Knopfler and Jimmy Buffett); with still photos and private home movie footage rounding out the material available to Otto. Karen Johnson’s buoyant editing coherently draws it all together.

Two moments made me laugh out loud. Elton John and his band are lying prostrate around the studio, wasted, inert, hungover and suffering tropical malady. Elton summons enough energy to rise up and roar out his dissatisfaction at this state of affairs. From a huge cloud of marijuana smoke in the control room comes the voice of a technician: “Well, I’m still standing”, which Bernie Taupin promptly used as the lyric for one of Elton John’s biggest hits.

The second moment is blacker. After Hurricane Hugo destroyed the studio in 1989 and the volcano erupted destroying most of the island in 1995, the voice of Verdine White from Earth Wind and Fire that was heard earlier in the film seems darkly appropriate:

“I’m from Chicago. We don’t do volcanos”.