The Rhapsodes - A new book by David Bordwell examines the work of key American film critics from the 30s onwards. 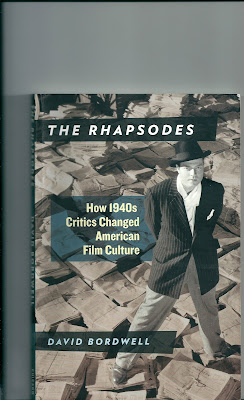 I hope I may be forgiven if there is yet more wallowing in nostalgia on display. However, there are moments that kickstart a lot of memories and opening my copy of this book, with a very nice inscription from its author, triggered much thought. I’ve told part of the story of how film enthusiasts back in the sixties got their fill of film criticism from abroad. Here is an extract from a longer review of a book of Raymond Durgnat’s writing and I cant resisting repeating it. Forgive me: A long, long time ago English film magazines arrived in Melbourne after a journey by boat that often took several months. They could arrive in a rush, several issues at a time. The place where they were sold was McGills Newsagency in Elizabeth Street, near Bourke Street. It was a dim and overstocked shop. The ground floor walls had books on shelves that reached to the ceiling. But the space was dominated by two large flat display cases that started near the entrance and went the length of the room. You could pick up the magazines on display and look at the contents. The Brit film journals, and the locally produced Film Journal would have the current issues on display. A couple of American publications went on sale there as well, though somewhat more sporadically.

In the early-to mid-1960s generally there were five Brit publications – Sight & Sound (quarterly), Monthly Film Bulletin, Movie, Continental Film Review and Films and Filming. Very occasionally there were copies to be found of publications put out under the rubric of Motion but they were hard to track down.  Films and Filming was part of a set of seven publications (Books and Bookmen, Music and Musicians, etc) and generally had the raciest prose, written by a set of writers, though not one that operated as a group as far as could be seen. The raciest pictures were in Continental Film Review.

The management of this part of McGills’ shop was in the hands of a young man named Mervyn Binns. He was a conservative dresser who wore a grey knee length dustcoat fastened by a belt. He had an oval face, slicked his hair straight back, held it there with brilliantine and wore thick-lensed glasses. When he left the shop at 5.30 pm at night he wore a hat. He seemed a very dour figure, though later with another far more extroverted man named Paul Stephens he had this act where the pair of them would dress up as vampires and hire themselves out at horror film premieres. One night when Stephens hid himself in the male toilet at interval and leapt out upon the arrival of the first patron, the punter complained to the management that he “nearly had a heart attack”.

Melbourne University Film Society fed off the Brit magazines like the little fish that live in the big fish’s mouth. Many programmes were selected according to the taste-making of that far away London film scene. New magazine issues were flashed around mostly amongst a small inner circle and a consensus formed in favour of the agenda set by Movie. ....

Just to set a scene. The rest can be found here at Senses of Cinema.

Now, moving right along.....From the US we had to make do, tracking our way down to the very same McGills and the owlish presence of Merv Binns, with far more sporadic appearances of The New York Film Bulletin, Film Culture and Film Quarterly. All three featured contributions by Andrew Sarris, who around that time ‘invented’ the ‘auteur theory’ Sarris was also writing for The Village Voice, a career which began with an explosive rave about Hitchcock’s Psycho and ended decades later. The Voice was not easy to track down and at various times sea mail subscriptions were  used.

In 1965 Sarris consolidated his place in the pantheon by publishing “The American Cinema” a compendium of short critical essays on dozens of key figures, using a set of categories that have survived to this day as shorthand for assessing any particular director’s place in the scheme of things.
The book also had endless pages devoted to lists and quality assessments. For the young and immature it was like the first step into Chartres.

On the very first page of  the Introduction to his book The Rhapsodes:How 1940s Critics Changed American Film Culture (University of Chicago Press, 2016) David Bordwell mentions Andrew Sarris (and Pauline Kael and Stanley Kaufman) and the contributions they and others made from the 1960s onwards. But his subject is those who came before, the now near totally forgotten figures who pioneered the critical discussion of films, especially American films, through the thirties, forties and fifties. Four names are up for analysis – Otis Ferguson, James Agee, Parker Tyler and Manny Farber. Bordwell calls the ‘group’ “the Rhapsodes, by analogy with the ancient reciters of verse who, inspired by the gods, became carried away” (p5). Very grand. Earlier though we are told: “Taken together, these critics offer us Hollywood without nostalgia, as a sprawling phenomenon trying to innovate, to turn a buck, and to figure itself out” (p4). That's clearer.

For most of us, even those of a certain age, this is almost entirely unploughed ground. Their names may be known but few would have read even a little of what they wrote. Possibly both Tyler and Farber would have been read by some.. The former wrote some racy if esoteric stuff on gender and some stuff that was reprinted and he was among the first to publish some encyclopaedic stuff as well, most notably  “Classics of the Foreign Film” (1962). Bordwell fills us in pretty succinctly.  “Each of the quartet displayed a fine intelligence trained in the high arts, particularly modernist trends. Yet each bypassed the current debates on mass culture and plunged directly into the stuff itself, unashamed. Each man urged his readers to see things in movies that more overtly serious intellectuals missed. Each cultivated a writing style that evoked a sharply etched personality” (p11).

So, with a chapter each, we do get a very rounded look at both the lives and the work of four pioneers whose work and influence, (including on each other), has faded from view. I found it interesting for instance that Ferguson made the effort to study Hollywood’s conditions of productions up close and personal. I found it interesting to read of Tyler’s burrowing into the notion of sub-texts. Agee’s life involved a very individual mix of critical activity, work with film-makers as a scriptwriter and his own novels and other books. It made him a figure of substance far beyond merely reviewing mostly Hollywood’s output. Farber moved in and out of the critical sphere but some of his phrase making is still with us. The wonderful term ‘termite art’ in particular seems to be enduring.

My friend the professor from Madison Wisconsin has hardly slowed over many years. His output of books, blogs, public lectures and no doubt more continues apace. He's always heading off somewhere to carry on the task of seeing the old and the new.  For this book there’s been a lot of hard work involved, a lot of delving and burrowing into what has been filed and forgotten. It deserves to find a readership from among the cinephile community who should want to know more of how the art of criticism has developed and the notion of film culture ever so slowly emerged under the informal critical leadership of these four key figures.
Posted by Film Alert 101 at 14:39