I went to an Eric Burdon and the Animals concert in the late 60s at the old Festival Hall in . He was on a double bill with Roy Orbison. The Big O came out and did a beautiful set and brought the house down with ‘Leah’. Those in the crowd who were there for Orbison were ecstatic. “Better than the record!” screamed one fan behind me, a cheer I have very occasionally since used at other concerts myself, usually to the general bewilderment of those nearby.

The interval between the two groups dragged out. Then on came Burdon and the Animals until someone noticed that the drummer was missing. Off went Burdon and the Animals and about ten minutes later, a sheepish, apparently stoned, drummer appeared along with the rest of the group and the show went on. Burdon tried valiantly to salvage something from the shambles and by the time he got to ‘House of the Rising Sun’ the crowd was in a forgiving mood. By that time the original Animals had mostly all departed, notably Alan Price who was off writing music and becoming a star composer/performer in his own right, contributing famously to the soundtrack of Lindsay Anderson’s  O The original group got back together once only for a very fine album ‘Before We Were so Rudely Interrupted which has the best ever version, known to this man, of Dylan’s “It’s All Over Now Baby Blue’.

One thing the original group never managed was a film of its own. Lots of Brit rock groups of the sixties did so but not the Animals - too dour probably and too unlike a pop group. I seem to recall that they did make an appearance in the background of a Raquel Welch picture called The Biggest Bundle of them All. But, memory plays tricks, and it seems, if it in fact happened, that it is an appearance so modest and so distant that they don’t even get credited for it in the IMDB. So Burdon has been left largely to his own devices and for four decades or so he has toured the world giving pretty much the same show each time. He was at the Basement last week and the crowd was mostly blokes and mostly blokes at or near Burdon’s age of 65. 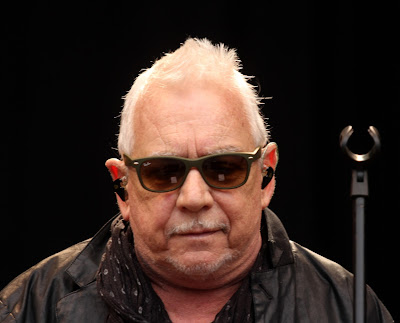 By now the show starts on time and by now the once diminutive Burdon has filled out quite a bit. He’s almost gnomish in his figure, short, squat, hiding behind shades, pudgy little fingers pointing at the band in playful mock recognition as he comes on and launches into the slowest ever version of one of his big hits Horace Ott’s classic ‘Don’t Let Me Be Misunderstood’. But the slowness has a purpose. It seems to take an eternity to reach the karaoke moment when he can climb up off his stool and begin the

I’m Just a Soul Whose Intentions are Good…

And allow the blokes, finally, to come back with the reply

He had us in the palm of his hand and there we stayed for the best part of an hour and three quarters including a couple of great encores finishing with Tina Turner’s ‘River Deep, Mountain High’. There were two more numbers allowing for audience participation, “It’s My Life’ and ‘We Gotta Get Othis Place’. But not ‘House of the Rising Sun’. That belonged to Eric. The Animals had taken it over from Bob Dylan who used to sing it at his early pre-electric concerts until the Burdon/Animals version became definitive. Dylan had to stop singing it because then people thought he was copying Burdon or wanting to be a rock star. Burdon even did a new number ‘The Secret’ which he said was on his new record published by Bush Records. Hmmm. It was nice.

The great man’s voice is still in pretty good shape. He has a band which appears to like him, especially the cute young bass guitarist. The piano player seems as old as Burdon and just as adroit. The others are kids. It’s apparently hard to remember all the song lyrics. Occasionally Burdon resorted to glancing at a book containing the words of the songs. Nothing like Frank Sinatra in his last days standing there with the lyrics coming up from a screen  below him but a sign that it aint easy doing a couple of hundred nights a year on the road as you head towards your seventies. The Basement was a great venue for the night. Close, warm, heady. …just right for aging rockers and their aging coterie of fans.

(First published on Filmalert.net awhile ago)
Posted by Film Alert 101 at 16:01