Do you want to work in Hollywood, or have you deliberately been keeping your distance?

I’m not quite sure. I always assumed that they kept me at a distance. And that if they invited me I’d probably, you know, be tempted. But there’s a bit more interest from that department now. I would only go to work on interesting stuff. I have no interest in relocating myself in order to try to pursue a career from a different space. I like living in London. It’s my home, it’s where my friends are, and I stay purely for that reason. There’s so much I’d have to leave behind to go somewhere else. I don’t want to live in Hollywood only for that reason.

What kind of preparation did you do for The Girl with a Pearl Earring? What kind of research?

That was easy in that it was fun. You know sometimes you play a character where the research isn’t. If I was playing a child murderer, I don’t know if I’d enjoy the research very much. With Girl with a Pearl Earring, I actually got to get my hands in paints and go to art galleries in Holland and, you know, just get inside the life of an artist who is absolutely fantastic.

I could have been playing an artist I hated – and I would have had to find something I liked about him – but I actually already had a love of Vermeer. So I couldn’t really learn to paint to any useful purpose, but I could learn to hold the brush right and I could learn to mix the paint, and I just got familiar with the stuff and I found it all hugely enjoyable. 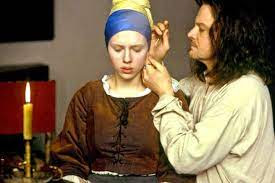 It wasn’t kind of like Ed Harris doing Jackson Pollock? It was more detached?

Well, yes. I mean, basically, what fascinated me about Vermeer wasn’t how he applied his brush. It was more how he must have seen things, because he saw so differently. You know, there are no layout lines on any of his figures: there’s no drawings underneath. If you look at Girl with a Pearl Earring, you can’t even see the outline of her nose and yet you know where it is.

He had this extraordinary softness in his view of everything. Some of the characters are literally out of focus in some of his paintings. They’re in soft focus, which is partly why people think he used the camera because the human eye wasn’t seeing anything that way. It just didn’t. No other artist was doing that at that time. And I was just fascinated with how he saw.

You know, you see me with a brush in my hand every so often, but a master painter and a bad painter are probably gonna look very similar holding a brush. So that wasn’t the important thing for me. It’s what he sees when he looks at her, or when he looks in the corner of a room, or when he looks at the light coming in through the window. It was that really.

Was there any one thing that gave you the key to the character? Like the wig?

And maybe it was just as well that it stayed elusive.

I just remember there came a point when I was deeply immersed in it all but had never found a single hook which helped solve any mysteries. And there came a point where the camera was rolling and someone said “Action” and I just had to get on and act, ready or not. And so, interestingly enough, it always felt like he was slipping away from me, but it just meant the chase was always on and it kept it very alive.

When you were planning the part, was the idea of Vermeer-as-brooding-theatre part of it? He makes a very theatrical entrance, pushing a curtain back, like an actor moving on to a stage…

No. I’ll let you into a secret. That was stolen from another scene. That was not my first appearance in the original script, or in what we shot. That was thought up when the film was rearranged in the editing. So it was actually part of a scene which we don’t have any more where she comes back from the apothecary with my paints and secretly hands them over to me at night. And that’s me returning from the pub, or something. So it was cleverly paced. And, again, that’s how films get made: you do it one way and someone has a rethink in the cutting-room. But, as you point out, it works very well exactly like that.

You’ve also been published as a writer with the short story, ‘The Department of Nothing’ (1). Is this another aspect of you that you want to develop?

I could say “yes”. But it’s always slightly out of reach because I never get down to it. I stay quite busy and the trouble is that the acting is the path of least resistance right now and it’s keeping me amused and stimulated, and it puts food on the table. So I think that the disciplines of writing are such that I’d have to forego this wonderful collaborative process of making films, that’s so fruitful in so many ways. I’d have to push all that aside and isolate myself for a while and calculate this other business and I haven’t reached the point where I’m prepared to do that. But I keep the idea alive. I’d either have to force myself to do it or wait until I fall on hard times.

Which is not likely to be in the near future.

Well, I don’t know. It could be in the very near future. Who knows? [Laughter]

Well, you could always play cricket for England, I suppose.

You haven’t seen my cricket. They wouldn’t even let me play cricket for my school.

Of the work that you’ve done, what are you proudest of and what do you most regret?

Oh, no. I cannot possibly answer that. I probably could if you gave me some time, but I panic when someone says, ‘What’s your favourite song of all time?’ I’ve made mental lists for years over that and then when someone asks me everything goes out of my head.

Yes, I was proud of that. But I mean, I’m proud of it because it’s a kind of showcase. But I have to say that kind of acting is easy and I think that’s what people who are not actors find very difficult to understand. But, you know, a lot of histrionics, lot of passion, lot of anger, lot o’ tears. And the portraying of disability is very eye-catching stuff, but it’s not difficult to execute. Actors love it.

Most actors who can act at all can do all of that stuff and they usually pick up a gong at the end of the day. It’s the subtleties that are really, really difficult, and are much less rewarding in terms of being appreciated. So, yes, I’m proud of it, but not because I think it was any great achievement of mine. I think it’s a fascinating, intelligent, uncompromising film. But there’s lots of other stuff I’ve done where the challenges have been greater.

(1) in Speaking with the Angel, an anthology of short stories edited by Nick Hornby, Penguin, 2000 (Firth in good company here: other included stories have been written by Hornby, Zadie Smith, Helen Fielding, Dave Eggers, Roddy Doyle, Irvine Welsh, Robert Harris and others) 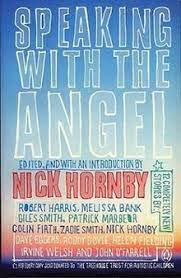 ***
Editor's Note: This is a second part of an interview with the actor Colin Firth. It was recorded by Melbourne film critic Tom Ryan as the basis of a feature article for The Age when the film was first released. The first part can be found  HERE Previous posts in this series have been devoted to conversations with Lawrence Kasdan (Part One), Lawrence Kasdan (Part Two) Costa-Gavras Jonathan Demme (Part One)  Jonathan Demme (Part Two) Click on the names to read the earlier pieces