On the eve towards one’s final destination, one is afforded a glimpse of a golden youth; textures and colours so close in front of your eyes that they are made indiscernible from your present circumstance, this amber renaissance, where your vision fills with the yearning of yielding lovers whose lips and limbs curve about your body; thought-flights, high-rise, sunken dreams. You are no longer present. Because here, your eyes are myopic and your tongue is dried up and could only taste the thin veil of this chimeric vision. A temporal gulf that lies eternally between you and your beating heart.

Remembering Truffaut at the anniversary of his death - 21st October 1984, I watched two films on either side of that date. One by director Albert Serra, La mort de Louis XIV, and the other, Truffaut’s unforgettable debut Les quatre cents coups; these two distant films fused together by a singular cinematic presence, that of Jean-Pierre Léaud. 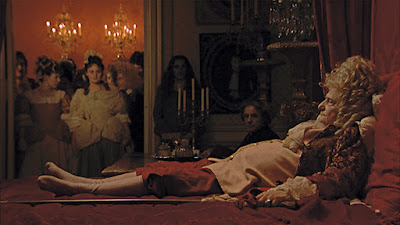 Seeing the great Léaud laid out on his death bed (above) as Louis XIV was a revelation. He exuded a sense of mortality we all feel at times, of that unspeakable destiny that awaits those who walk on this earth. The key that consoles the yawning abyss is conjured in the word ‘waiting’. It is certain that the idea of death is never too far away from one’s thoughts; even when holding an infant, their father already dreams of his child’s fate, of what lies ahead. The head of death darts up and although immediately extinguished, but we know all too well that it is simply lurking behind the sun. Into the shadows and vales of death, we must all turn.

Watching Léaud in La mort de Louis XIV, I saw the Sun King. But in him, I also saw the many incarnations of Antoine Doinel. Antoine’s youthfulness and misadventures had cast its glory days in Léaud’s lived-in face. Here, it is framed by highly decorative wigs. His reclined body incumbent and inert is fully dressed, adorned in intricately embroidered brocade - oftentimes gold and crimson jacquard; and sometimes in French blue with gold details of an oriental landscape. He is always both cushioned and covered by dark wine-red velvet furnishings, an embossed pillows and coverlet. He is a feast for the eyes, despite the gruesome onset of gangrene that would eventually take his life (from a blood clot). First consuming his entire leg, it looked as though the King had donned a black stocking when in fact he was putrified from within. Nonetheless there is no mistaking that Léaud was Louis, and his wig is a lion’s mane. Perhaps this is what director Nobuhiro Suwa innately saw in Léaud when he casted him as veteran actor, Jean, in his very fine film Le lion est mort ce soir (2017). Even in these final days, there is a sense of arrogance and incredulity in his very defiance of death: Doinel had grown stately. 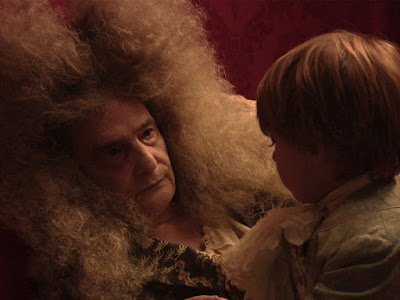 Serra gave utmost care to the treatment of this film. He and his research team consulted physician’s texts, historical manuscripts in order to provide crucial measures of historic accuracy. This intimate retelling of the final days of Louis the Great, who died four days ahead of his 77th birthday on the 1st of September 1715 is a quiet and sombre affair. Louis XIV acceded to the throne at only four years and eight months of age and ruled France for a period of 72 years and 110 days, the longest of any monarch. The many facts of those last days and hours were taken from a specific source, the memoirs of Duc de Saint-Simon in which the exact words spoken by the King on his deathbed were recorded. But during the editing of the film, all the dialogue was cut from those scenes, so that, in Léaud’s own words, “what you have are what precedes or succeeds them, and with that you’re left with that incredible intensity of the moment.” In that aspect, the dramaturgy came solely from Léaud’s stately presence. This is acting in micro-movements: the mood and tone created by a flicker of the lids, a prolonged gaze, grimaces or the sharp drawing of breath. Our approach to the great King in his reduced capacity is a more intimate affair; to read these diminutive traces that only the First Valet to the King, exquisitely played by Marc Susini, was able to discern and decipher.

This grand film was shot on a small budget (less than $1M), and in 15 days without rehearsals. The methodology of Serra’s artistry demanded the actors be fully present in their various incarnations of this historical moment. And I for one, deem this piece of cinema to be a spectacle, including the singular prolonged moment of direct address, (and I’ve always loathed the breaking of the 4th wall - it most certainly didn’t work in Orlando (1992), or one of my favourite Christophe Honoré’s films Dans Paris (2006), in Amélie (2001) it was almost passable). I found myself strangely mesmerised by Léaud’s gaze, it was not the usual complicitness that many such direct address want to extract, but instead, this gaze was invitational in tone, and perhaps it is the delicateness about his eyes that made this encounter more alluring. A fitting Kyrie from Mozart’s Mass in C Minor conducted by Helmuth Rilling with his Bach-Collegium of Stuttgart requests our presence to lock gazes with the King. 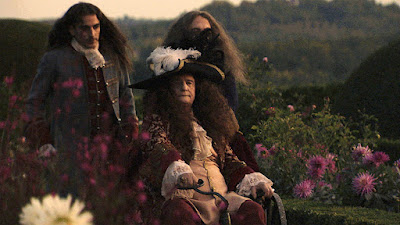 Unlike a modern take on Beckett’s Waiting for Godot, a good approximation is to be found in Ashish Avikunthak’s wonderful film The Churning of Kalki (2015), where a continual deferral of the whatever it is you are searching for escapes you; Serra’s film provides a glimpse into the abyss rather than the infinite circumnavigation around its edges. This is an affecting reminder of what is lurking in our presence.

Whilst La mort de Louis XIV is not Léaud’s final film. (It was already succeeded by four others). I cannot help but see this film as a bookend to his first - François Truffaut’s brilliant Les quatre cents coups; a film that continues to sing inside my breast long after my last viewing of it; and I would situate it amongst the very best of the French New Wave. Immensely touching but impossibly light. Liberty, youth, brotherhood are bounded in sensitivity and timelessness. There’s a certain feeling that’s intrinsic to all fourteen year olds, (as Guy Gilles rightly says in his film Love at Sea (1964), “you have to be very young to feel this”.  Note also the young Léaud has a cameo role in this film), that breathless ecstasy of adolescence, the abandonment of all ego or judgement, fuelled by a mix of daring and innocence. Truffaut found the alter-ego of his childhood in Léaud; and whilst we are familiar with the story of how Léaud won the role of Antoine Doinel, (he was cast out of more than 400 boys who came to the casting call after Truffaut put an ad in the newspaper France-Soir, there’s a fantastic little audition clip that shows the young Léaud who had clearly skipped school and travelled all the way to Paris by himself for the audition; he was at once sweet, cocky and sure of himself). It is this exuberance, naïveté and arrogance that Truffaut managed to capture on screen that made this film so special. But more than that, Léaud was in many ways Doinel. This fictional character was created by Truffautand Léaud through a further four films: Antoine and Colette (1962), Stolen Kisses (1968), Bed and Board (1970) and Love on the Run(1979). Note that all except for Stolen Kisses and Love on the Run are available to watch currently on Mubi.

Returning to Les quatre cents coups, the film opens with the unforgettable and heartbreaking score by Jean Constantin; we see passages of various neighbourhoods and streets of Paris through the window of a passing car with the Tour Eiffel always in the distant horizon. We wonder where this car’s traveller would take us; perhaps this is a jump forward to when Doinel was taken to the reformatory and the gaze is that of Doinel’s leaving a city he knows; well before his escape. His ability to redirect his gaze, to confront us, his audience and judge. In the semi-blurred freeze frame that ends the film, Truffaut’s young Doinel reminds me of the famous photograph of 16 year old Arthur Rimbaud by Ìätienne Carjat that I’ve grown to love so much. Of course, Doinel cannot be compared to Rimbaud in temperament or talent, but nonetheless, the two images share the same delicacy around the mouth and eyes to only be found in boyhood.

“Faire les quatre cents coups” is a French saying that literally means “to cause trouble in every possible way”, and that is how society and those associated with its regulators would see of Antoine. The title is more a critique of those types of enforcements and agencies of authority. Instead, this film is a heady mixture of a vulnerable time in life, a youth who is coming to his own, often misunderstood, the lack of guidance from figures of trust, and the love-hate relationship with his parents propelled him towards his own search for identity. As a semi-autobiographical film, Truffaut’s lens is not clouded with sentimentality, having ditched the conventions of cinema from the forties and fifties, the nouvelle vague reinvented ways of storytelling - jump cuts, filming on the street, non-diegetic inserts, and improvised scenes. All this allowed Truffaut et al to capture the esprit of that time; those fleeting moments before a child becomes a man; that very fragile husk of freedom before one becomes accepting of the life one needs to lead (or sometimes reject).

It’s easy to see why so many (myself included) seek a different life in the darkened theatre, where something bigger-than-life enfolds and carries us in its slipstream. These are dreams of a different nature, an offering up of alternatives to the disenchantments of life. And this brooding sentiment became fastened to the soixante-huitards; a manifestation that is still within our collective consciousness. Reminders of this spirit live on in the graffitied street corners around the 5th even today. To see them our hearts are opened once more. The revolution that never took place is actually a revolution that never ended.

Rather than raising hell, Antoine leaves your heart to ache in shreds long after the word FIN appears on screen.

The two films bookend what is a search for the truth in cinema. The cinéma vérité authenticity in both Serra’s and Truffaut’s film peels back the saturated layers of luxuries and complexities technology has brought to 21st century filmmaking. Let’s settle with the heartbreakingly observed poetry in the boy and the king.