“I’m just beginning to understand what film is.” - Part One of a conversation between Tom Ryan and Lawrence Kasdan shortly after the premiere of DREAMCATCHER (USA, 2003) -


When I spoke to him in March 2003, Kasdan was in “an unusually stormy but still beautiful” Hawaii, looking out over the sea from his hotel room and enjoying a long overdue break from work. He’d just finished an exhausting post-production on Dreamcatcher (2003), based on the Stephen King novel written a couple of years earlier. A big-budget horror film bursting with gross-out moments, body-snatching monsters on the rampage and a human villain or two, it’s mostly set in or around a cabin in the woods in Derry, Maine – regular King country – where four thirtysomething male friends have been meeting annually for more than 20 years.

For the writer-director of films such as Body Heat (1981), The Big Chill (1983), The Accidental Tourist (1988) and Grand Canyon (1991), Dreamcatcher was an opportunity to move in a new direction. He’d written action movies before: The Empire Strikes Back (1980), Raiders of the Lost Ark (1981) and Return of the Jedi (1983). And he’d directed a couple of Westerns, Silverado (1985) and Wyatt Earp (1994), but they’d had more in common with the reflective ensemble films for which he’d earned his reputation than with any regular shoot-’em up aspects of the genre.

Then the two films he’d made during the late ’90s – the romantic comedy, French Kiss (1995), with Kevin Kline and Meg Ryan, and Mumford (1999), an appealing small town comedy with a then largely unknown cast, had been all-but-ignored in the US. Mumford wasn’t seen in Australia until its video release a couple of years later.

When I spoke to Kasdan, his sons, Jon and Jake (with wife and occasional writing collaborator Meg Kasdan), were several years into the process of building careers in the film and TV business after making their screen debuts as little kids in The Big Chill.

By that time, Jon had worked as a writer on the much-loved TV series, Freaks and Geeks (2000), as well as on Dawson’s Creek (2001 – 2002). Since then, he’s teamed with his father on the screenplay for Solo: A Star Wars Story (2018), a partnership that Kasdan senior had long hoped would eventuate. He has also directed a couple of features (including the In the Land of Women in 2007), as well as several episodes of the undervalued Roadies (2016), and is the showrunner for Disney’s forthcoming series of Willow.

Since the interview, Kasdan senior has written and directed the mostly disappointing Darling Companion (2012) and written a further two Star Wars films – Star Wars: Episode VII – The Force Awakens (2015) and Solo: A Star Wars Story – as well as a so-far unmade screenplay for November Road, an adaptation of Lou Berney’s terrific 2018 novel. He’s currently at work on the script for Stay Close, an eight-part TV series for Netflix based on a 2012 novel by Harlan Coben.

Tom Ryan: Was working on Dreamcatcher constraining or liberating?

Lawrence Kasdan: To me it was liberating. I chose to do it so as I could work in those areas where I’d never gone before. You know, with effects, with action, with a lot of hardware… things. So it was a whole new education for me. I loved working with ILM on the effects. It was a very satisfying, entertaining experience for me.

The films you’ve directed are usually more about character than plot, even the Westerns. But Dreamcatcher seems to reverse that. Not that I’m saying character is absent, just that the plot is the driving force.

That’s fair and it was deliberate. I wanted to do that. I’ve been doing a lot of general ensemble comedies and a few other things, so I chose something with a strong narrative.

Is it true that Stephen King sold the movie rights for $US1, and have you been in touch with him?

I was in touch with him all the time. He has some sort of special arrangement with Castle Rock where they’re able to set up the movie for no money. He takes no money. But once it’s set up, he has a very rich deal.

He has been incredible about this movie, totally supportive. He says that he loves it and he was along with every draft and every cut and then was at the premiere two weeks ago. So he’s been very involved.

He’s an interesting guy. I had never met him before. He’s very charming, self-effacing, funny. He’s very aware of what he’s about. Whatever’s weird about this story involves Stephen. 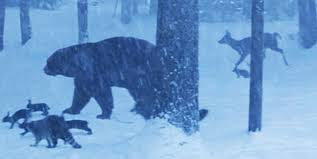 What attracted you to the project in the first place?

I heard about the book and I read it because I’d been looking for something to do where I could do visual effects. I had written movies like that, but I’d never directed them. So I wanted to try them and to use effects in a very realistic setting, where it wouldn’t be some entirely digital universe. And I thought this presented a lot of things like that.

It wasn’t just because it began with a group of friends, which related to other things I’ve done, but because they are then thrown into this extraordinary situation. And so I thought that it would be a lot of fun.

Certainly there’s a lot of sparkling dialogue in the opening sequences between the four characters.

I’ve always sensed something very Hawksian behind your work, about group interactions and characters working themselves out through that.

I thought that might have been one of your responses to the question about what attracted you to the project.

That’s what I’m trying to say, that the way the group works is that their friendship is ultimately their only hope. That’s sort of a theme that has been running through all my movies and I think it’s strong here, except that it takes off in this very extravagant adventure.

Did you spend a lot of time at the post-production stage with this film?

Yes. In fact, I just finished it right before the opening. That was the eye-opener about doing a visual effects film. When you finish shooting the regular film, it’s as though you start a second film the next day, despite the fact that we had been doing the effects all through production. I didn’t realise that for nine months of post-production we would be working on these 400 effects shots. And every day talking to ILM, you know.

When you’re directing, how sacred is the script you’ve written and how much are you rewriting it as you’re blocking it out.

On set, you know, I try to be very open to what’s going on. And what you want is to let everybody’s contributions be felt at the same moment in the frame, so that there’s some kind of spontaneity to it. Sometimes you achieve that well, sometimes you don’t at all. I believe in the scripts when I write ’em and I don’t let people change them easily. But I always say the script is innocent until proven guilty.

Of course, when you’re on the set you’re trying to be open to ideas from everybody. And also to discard the ideas that might be good ideas but might not be appropriate. Then in the editing room, it’s a whole new ball-game because you discover things about a movie that you could never figure out while you’re writing it. For example, that you don’t need a whole scene, that a glance between two actors can take the place of four lines of dialogue, and that kind of thing.

So you try to be very open from the get-go when you’re writing, when you’re actually shooting the movie and then when you’re finishing it. You say, ‘What’s really going on here?’ And, frankly, most of the time it’s very hard to have any perspective on it.

Some people think that the worst person in the world to cut a movie is the guy who just directed it. You’re very much in love with the conception and you’re happy about it on film. And you’ve won so many little battles that you may lose sight of the war.

I’m constantly amazed. I went to the Directors’ Guild when they gave the Lifetime Achievement award to Akira Kurosawa, who’s my favourite director and who was about 80 years old at the time. He said, ‘I’m just beginning to understand what film is.’ And all the directors in the place knew exactly what he was talking about.

It’s just incredibly hard, you know, to figure out how it works. Sometimes you make mistakes. You think something works a certain way but it has exactly the opposite effect. And it’s different for everybody who sees the movie because they bring their whole history to it. It’s a very plastic kind of form, you know. You work very hard to achieve certain kinds of effects but it’s really like alchemy: you don’t know how it’s gonna come out.

When you’re writing, do you always like to fly solo or do you show it to friends, read it around the dinner table and so on?

I have several people that I trust whom I show it to. In this case, Bill Goldman had started writing the script, then we did a draft together and then he stepped out. But I showed him everything that I wrote after he left. And, of course, Stephen King and the people in the company, and all my circle of people. So there was a lot of people looking at it.

It’s very tricky. I’ve written almost everything I’ve done and some of the things have been very personal. Some of them have been very successful for me and they’ve given me the power to do my movies the way I’ve wanted to do them. But it doesn’t always work.

Sometimes your personal interests and drives match up perfectly with some sort of zeitgeist in the world and a lot of people respond to your movie. Other times, the thing that you’re trying to convey finds no connection to the world. It’s very hit or miss, you know.

Editor's Note: This is a first part of an interview with the American film-maker Jonathan Kasdan. It was recorded by Melbourne film critic Tom Ryan in 2003 as the basis of a feature article for The Age. Previous posts in this series have been devoted to Costa-Gavras Jonathan Demme (Part One)  Jonathan Demme (Part Two) Click on the names to read the earlier pieces