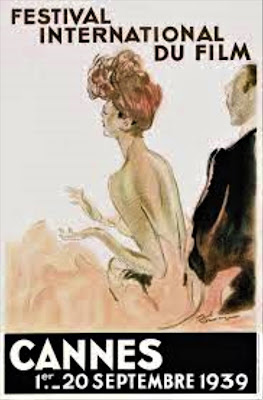 In August 1939, at the height of an idyllic summer, the glitterati of high society and show business converged on Cannes for the first Cinema Festival of Free Nations, a response to the previous year’s Venice Film Festival, a showcase for the fascist Italy of Benito Mussolini.  A record 1386 passengers had arrived in France on the liner Normandie , among them Edward G. Robinson, Gary Cooper, Norma Shearer, Bob Hope, Charles Boyer, Tyrone Power and his new wife Annabella, all headed for the festival.

A lavish gala preceded the opening. On the Croisette, to the music of five orchestras, guests danced under the stars or watched a show hosted by France’s most popular comedian, Fernandel. But a sudden squall interrupted the fireworks that ended the fete. Icy air rushing off the Mediterranean, accompanied by flashes of lightning, sent celebrities fleeing to their hotels.  Most slept serenely, unaware that Hitler’s panzerswere invading Poland. They woke to find Europe at war,  and the festival to celebrate “the cinema of free nations” indefinitely postponed.

No movie has ever included this moment of jarring disjunction in the history of Europe and the world, with its implicit sense of nature and humanity shatteringly at odds; the Pathetic Fallacy at its most vivid. Hollywood has exploited the announcement of Pearl Harbour to the point of cliché but the start of war in Europe never inspired the same the dramatic attention.  Perhaps European film-makers would have followed Hollywood had the Polish invasion led, like Pearl Harbour, to immediate conflict rather than to the so-called “Phoney War” as Europe waited apprehensively to see what Hitler would do when the snows thawed.

Traditionally, British films and television have mined the period for laughs, a scandalous concept for American media, and, apparently, its audience, to judge from the thunderous flop of Steven Spielberg’s 1941. Contrast the continued success in Britain, from 1968 to 1977, of BBC TV’s Dad’s Army, which showed Britain’s class distinctions replicated in a contingent of bumbling amateur National Guard soldiers.  Its animated titles set the tone,  depicting Britain as a yapping puppy keeping the Nazis at bay.

Recently, however, some films have taken a more serious view. As well as Dunkirk and the various Winston Churchill biopics, Simon Stone’s The Dig  and Steven Poliakoff’s Glorious 39  chose to deal with this moment of historical free-fall, and, in their case, using the same geographical location, though in a very different manner.

In a key scene from the former,  Ralph Fiennes’ truculent East Anglian archaeologist glares resentfully at Spitfires roaring overhead, an omen that war in the present will delay work on a project measured in millenia. Glorious 39  makes a similar point with a glamorous dinner party where, under a marquee on a perfect lawn amid the ruins of stately Walsingham Abbey,  politicians debate  appeasing Hitler.

The Top People’s Norfolk of Glorious 39, with its National Trust settings and full-dress intrigue, contrasted with the shabby gentility and mud-caked boots of The Dig, might be  a rebuke to the Dad’s Army  vision of a Brave Little Britain united in defiance of the Hun. Implicit is the reminder that the country’s survival in World War II was, as the Duke of Wellington said of Waterloo, “a damn close-run thing.”

If the model for Dad’s Army was Ealing comedy, Poliakoff burgles Hitchcock. Glorious 39  uses many  of Hitch’s favourite tropes; suave villains who offer poison with a smile; families unmasked as cold-blooded killers; a lone character nervously exploring some surrealistically sinister location, in this casea slaughterhouse for domestic pets killed off on government advice rather than see them crazed by the bombing. The yapping puppy of Dad’s Army becomes scores of dead Fidos and Kitties bagged in white cloth that dangle around the heroine (Romola Garai) as she discovers among them the corpse, also shrouded and hanging, of her lover (Charlie Cox).

The ubiquitous Bill Nighy adds his urbane presence as a genial politician to Glorious 39. Dad’s Army  had his equivalent in John le Mesurier’s long-suffering foil to pompous commanding officer (Arthur Lowe), also his boss at the bank in which both work. Nighy again adds his implied stamp of approval to another recent exercise in reconstruction: Their Finest, byDanish director Lone Scherfig, which also uses the early days of war in Britain to riff on changing roles of class and gender, and the clash of historical far-sightedness with present pragmatism.

The project to make a romantic comedy about Dunkirk sweeps up an innocent Welsh woman adrift in London (Gemma Arterton), a cynical screenwriter (Sam Claflin), a fussy movie actor (Nighy), a snappy Eve Arden-type lesbian named Phyl (Rachel Stirling) and a miscellany of Whitehall bureaucrats, European displaced persons and movie gypsies. Gaby Chiappe’s screenplay from Lissa Evans’ novel embraces, unabashed, a variant of the Dad’s Army/Ealing formula, turning away from questions of history to the practical problems of how to sit out a bombing raid in the Underground or convincing housewives to grow carrots.

Nighy, Eddie Marsan and Helen McCrory collaborate convincingly as the ageing actor, his Polish agent and the latter’s sexually alert sister, who inherits the agency (and Nighy) when the former is blown to pieces in an air raid. The film extracts Grand Guignol humour from Nighy trying to identify the dismembered remains of Marsan, and from Arterton who, laughing at having mistaking shop window dummies for corpses after a bombing raid, turns away, only to stumble over the real thing. At such times, the weightier questions of history and heritage seem remote.