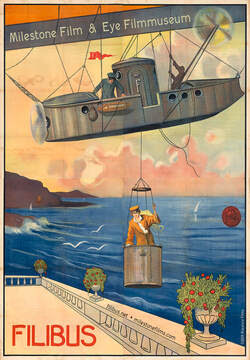 “No other crime thriller compares to Filibus!” exclaimed a Corona Films ad in the April 1915 edition of the Italian film magazine La Vita Cinematografica — and for once the ballyhoo was correct! Directed by Mario Roncoroni and scripted by future science fiction author Giovanni Bertinetti, Filibus is the most exciting, witty, feminist, steampunk, cross-dressing aviatrix thriller you will ever see! Previously seen in a badly subtitled, imperfect version, Filibus was recently remastered by the Eye Filmmuseum, restoring the film’s marvelous range of Desmet tinting and toning in the original nitrate material. To bring the film back to its flavor of the period — when the characters Fantomas and Arsène Lupin were worldwide sensations — Milestone hired young poet Austin Renna to write new intertitles based on an improved translation by Eye’s archivist Elif Rongen-Kaynakçi. To go with this fantastical film, the famed Mont Alto Motion Picture Orchestra have created and recorded a stunning score.

Flying high above the clouds her dirigible, Filibus, the mysterious sky pirate, is a master of disguise and the scourge of millionaires, banks, and the police. Lowered in a gondola by her henchmen, Filibus steals from the rich and then mysteriously vanishes into the clouds. 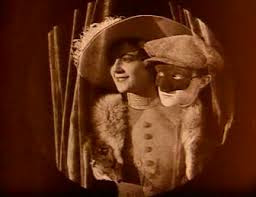 However, now, with the famed Detective Kutt-Hendy on her trail, Filibus must up her game. Posing as the Baroness Troixmond, the jewel thief enters the local magistrate’s office and volunteers to help catch elusive Filibus, The criminal, she announces, is none other than the detective himself! There follows a cat-and-mouse adventure that includes an ancient Egyptian statue of Bastet with glowing diamond eyes, knockout powder, mysterious handprints, and a secret miniature camera. Filibus is a formidable opponent, who even cross-dresses and poses as the aristocratic Count de la Brive to court the detective’s beautiful sister while plotting his downfall.

Who is Filibus? Announcing an Amazing Discovery

“Who is Filibus?” In 1915, ads for the film’s release posed this intriguing question, hinting at the mysterious multiple personas of the main character. But interestingly, the identity of the superb Italian actress who portrayed Filibus was never revealed. Her performances as Filibus, the Baroness Troixmond, and the cross-dressing Count de la Brive were subtle, brilliant, and decades ahead of her time. She would have become an international star — if the start of World War I a few months after the film’s release had not cut short her career. For the past half-century, the starring role in Filibus has always been credited to the actress Cristina Ruspoli; her remarkably modern performance has been extolled in books and articles.

But doing research at the Eye Filmmuseum during the summer of 2018, intern David Emery made an astounding discovery. After reviewing photos of Ruspoli, he realized with astonishment that she was not the star of the film, but Leonora, the detective’s sister! So, 103 years after the film was released, the original question took on a deeper meaning… Who was Filibus?

Emery had to become a detective himself to discover her true identity. Luckily, in its vast silent film collection the Eye Filmmuseum had a number of other films by the Torino-based producer, Corona Films. Going through the collection, Emery screened an obscure film, Signori Giurati (Gentleman of the Jury), and discovered in the minor role of the young daughter Helene, the actress who had starred in Filibus! Luckily, on the film print she was credited as Valeria Creti, a little-known actress of her day.

It is especially fitting that the Eye Filmmuseum, who premiered FILIBUS at the 10th Women and the Silent Screen Conference this May 25-29, has been able to identify this gifted but forgotten performer, more than a century after her mysterious starring role. At last, the work of the amazing Valeria Creti will be recognized!
*********************************************
THE SCREENING OF FILIBUS WILL BE INTRODUCED BY SUSAN POTTER. SUSAN HAS ALSO WRITTEN COMPREHENSIVE PROGRAM NOTES ON THE FILM, ITS DIRECTOR AND THE RESTORATION WHICH YOU CAN FIND IF YOU CLICK HERE

SUSAN POTTER is Senior Lecturer in Film Studies in the Department of Art History at the University of Sydney. She's the author of the award-winning book Queer Timing: The Emergence of Lesbian Sexuality in Early Cinema, and General Secretary of the Screen Studies Association of Australia and Aotearoa New Zealand (SSAAANZ)