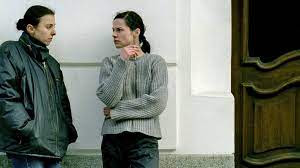 Another one of Angela Schanelec’s enviable contemporary realist films where the integration of the intensity of everyday life and art for the director/screenwriter seems very complete and coherent. This is one of Schanelec's earliest features, but you'll find her visual style (a focus on the body and face of actors, flat images that inscribe clean and simple lines and framing) already strongly represented and already mesmerising.

In this film, the geometry of faces and actions seem to say something about how relationships stay intact. The continual placement of Ari alongside, parallel to Christian in the frame -- in one scene, they are walking with their profiles facing the same direction, at the same speed, with the camera tracking so that you feel an impressive synchronicity of their parallel movement against an almost-blurred background -- tells us that it’s something more akin to a gravitational tendency towards a person, the inertia of synchronised thoughts, rather than an ongoing admiration and passion for someone, which can feel more jagged and disruptive.

The writing for Ari's most desperate moments is well-written enough to never feel overly lyrical or melodramatic even though she speaks almost constantly and importunately in most of her scenes. There’s an overall sense of scandal in the open pleading and vocalised mining of the internal by each of the characters. The feeling of hearing and seeing something intimate and easily considered shameful, but ultimately very honest, continues for the duration of the film.

There’s an especially memorable scene in which Isabel and Ari’s mother is prodded by one of the sisters to distil their personalities as a way of explaining the apparent romantic success of Isabel - and their mother does so, too articulately.

The film culminates in a quiet but gripping shot very unlike the neatly framed, flattened ones of the rest of the film. Christian is on his bed next to what look like two slain animals (metaphorically speaking), with light and shadow distributed naturalistically across the frame. It’s as if the film briefly inverts its visual/narrative logic and escapes to a more natural, conservative cinematographic style for the most dramatically bewildering moment of the narrative. Shortly after, the characters assume their final positions in this debacle, and their spirits settle into more permanent states (in the narrative and on the screen) which seem to reflect the truth of their mother's feelings about them.

Schanelec was a theatre actress for seven years before working on films. This film will make you want to read Chekhov and still not find the thing that makes her films feel like such truthful consolations. 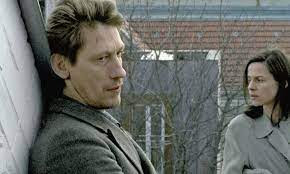