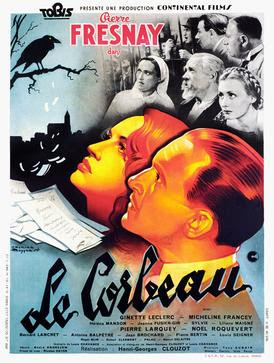 Faced with administering a defeated France during World War II, the Germans, with too few troops to guard every village, imposed direct military rule only over Paris and the coast, while a collaborationist police force, the loathed Milice, kept the rest of the country cowed. Aware that snitches played a vital role in controlling peace-time crime, they made it known that, if you coveted someone’s job or house or wife, it made sense to leak that they were a resistant, a communist or a jew.

Morose by nature, and chronically ill with tuberculosis, Henri-Georges Clouzot made films that explored the human capacity for greed and treachery. He learned his trade, like many French film-makers between the wars, partly by working at the Ufa studios in Berlin. Returning to France with a detestation of Hitler, he was appalled, though not surprised, to see the occupiers exploiting the worst instincts of his countrymen.

A 1922 case of a town terrorised by poison pen letters inspired the screenplay that became Le Corbeau.  German-controlled Continental Films, which financed most productions in occupied France, saw only a script with the kind of tension and intrigue that made Alfred Hitchcock so successful, and was unconcerned that, apart from public-spirited doctor Rémy Germain (Pierre Fresnay)  himself a victim of its malicious letter-writer, there was nobody in the story with whom an audience could identify. We come to believe that any one of the town’s inhabitants might be the person who composes the playfully vicious letters signed  Le Corbeau – The Raven.

With the mastery of suspense that he would hone to razor sharpness in The Wages of Fear  and The Fiends, Clouzot cunningly turns the doctor’s attempts at investigation into a lesson in the duplicity of those he once trusted and even loved. It was an inspiration to cast Fresnay as Germain. A specialist in playing aristocrats, most notably his de Boeldieu in Renoir’s La Grande Illusion, he brought to every role a courteous reserve, accentuated by one of the most distinctive voices in cinema.

It is no stretch for Fresnay to convince us of Germain’s innate morality and compassion; qualities that the film ingeniously calls into question as he uncovers more unsavoury details about the town. In a key scene, a cynical colleague, to make a point, sets an overhead light swinging. Corners of the room are successively lit and thrown into darkness. “You think light is good and evil is dark,” he challenges as day and night succeed one another, second by second, on a globe of the world, “but where is the frontier of evil? And on which side of it do you belong?”  Germain tries to halt the light, but only burns his fingers. Less painful, says the other with a smile, to remain in happy ignorance.

Sublimely lit, edited and acted, Le Corbeauexposes the wartime treachery and treason that only became common knowledge with Marcel Ophuls The Sorrow and the Pity.  There are none of Pagnol’s life-affirming peasants nor René Clair’s lovable working stiffs; just the rural bourgeoisie, exposed in the sideways glances and lowered eyes of guilt, lies and secret lust. Who knows what evil lurks in the hearts of men? Clouzot knew.