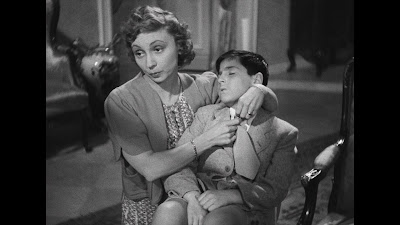 First screen (above) is Gremillon regular and most beloved comédienne, Madeleine Renaud. Last two screens are the ubiquitous Raimu playing Victor, and the other major female part, played by Viviane Romance.

I have not really watched this in full since the early 2000s when Ken Wallin and I attended one of Barrett Hodsdon's marathon French rep history 16mm screenings in Sydney which included Gueule d'Amour, continued with Les Quatre Saisons d'André Masson and ended with Victor.

I was so disshevelled and shattered after Gueule, one of those staggering discoveries you are completely gutted and overwhelmed by on very first viewing that I couldn't stay long into Victor.

Indeed, Ken later confided he also had a few difficulties with it. What is it exactly, we wondered? A Comédie Noire? A melodrama with Grémillion-esque undertones of melancholoy "otherness" sabotaged by the broadness of Raimu's performance? A failure? What were we missing?

The new restoration is a cracker, taken from original nitrate elements including the O-neg and probably a fine grain positive. The credits look ominously ragged and dark but give way, with one dissolve to an absolutely flawless image quality. I'm still watching it in bits and pieces and I have to say the vastly superior quality of this transfer to the old French Embassy 16mm dupey, ragged copy is immensely helpful in keeping ones’ eyes on the screen.

The whole show is so obviously late 30s' Grem post Gueulewith a screenplay by Charles Spaak, music by Roland Manuel, and all but the Toulon exteriors shot at the Templehof UFA studio in Berlin, as wasGueule d'Amour with production design by Otto Hunte and Willy Schiller (from UfA, viz. Metropolis) as indeed was Renoir'sLa Bête Humaine which was originally begun as a project for and by Grem himself. Renoir saw an opportunity and with Gabin, who was then at his peak popularity Grem was basically shafted from his own project.

I am still struggling with what it is the film is actually doing, as the scenario, and especially Victor's characterization seem totally at odds with mood and atmosphere here. The shooting and lighting and production design are so overwhelmingly pre-30s German Expressionist you wonder if Grem is essentially dabbling in a short resurrection of that great Weimar period of German cinema, before Hitler, the Occupation the Holocaust and the War.

Maybe one day I'll work it out.

In the meantime you can order it from Amazon France, and it comes with English (and French HOH) subs for the feature, but alas not for the very critical extras.