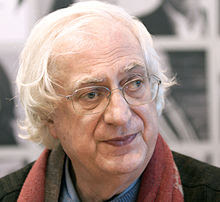 The term “well-loved”,  thrown around liberally when any public figure dies, is indisputably appropriate in the case of Bertrand Tavernier.  His amused and cordial presence was such a fixture of the French movie scene, and in particular of film scholarship, that it will, happily, survive long after his demise.

Among our happiest conversations was his account of representing France in the negotiations with American producers who claimed the fifty per-cent limit on the number of foreign films on French screens represented “restraint of trade.”

He led a delegation to Washington that met with studio and presidential representative Jack Valenti and other industry figures.

“I told them, ‘You accuse us of monopolistic practices. But do you know the percentage of foreign films shown on American screens? One and a half percent!”

He smiled in rueful reminiscence. “Looking around the group, I saw the same thought on every face. ‘That much?’ ”

He objected just as vigorously to chauvinism at home. The 1985 L'appât/Fresh Bait, based on a true story, was his acerbic comment ona voguish Americo-philia among France’s post-1968 generation. Three young Parisians rob rich bourgeoises, the girl luring the men into the hands of her murderous partners. “They wanted to open a clothing shop in New York,” Bertrand said scornfully of the trio,”yet none of them had passports.  And none could speak English.”

Like Godard and Chabrol, Tavernier entered the film business as a publicist for American distributors. Deciding which of his two hats to wear, as cinéaste or promoter, frequently faced him with crises of conscience. In May 1968, as Truffaut, Godard and others stormed the Cannes Film Festival and clung to the curtains, preventing the screening of Carlos Saura’s Peppermint Frappé, he cheered their courage while grieving that the film was one he’d been hired to promote.

Nor did he flinch from going head to head with cinema greats if they impaired his work as publicist.  Delighted to be chosen to representA Clockwork Orange, he lost patience with Kubrick’s nit-picking memos and calls. Unconcerned whether or not it would impair his relations with Warner Brothers, one of his biggest clients, he cabled Kubrick c/- Warners in Los Angeles “I RESIGN STOP AS A FILMMAKER YOU ARE A GENIUS BUT AS AN EMPLOYER YOU ARE AN IMBECILE.”

Almost immediately he had a call from distribution executive Joe Hyams in Hollywood.

Bertrand steeled himself for a bollocking.

“It’s framed on my wall,” Hyams went on. “And listen – whichever of our films you’d like to handle for us in future,  consider them yours.”