On SBS and Streaming on SBS On Demand - Rod Bishop is engrossed by SHADOWPLAY (aka THE DEFEATED, Måns Mårlind, France/Germany/Canada, 2020) 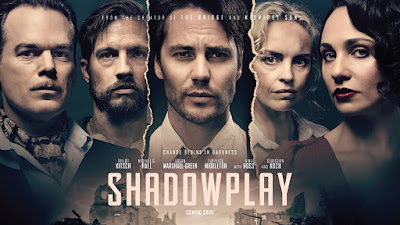 Berlin 1946. Max McLaughlin (Taylor Kitsch), a Boston cop with German ancestry is ostensibly in the war-ravaged city to put together a local police unit. The squad contains Elsie Garten (Nina Foss) whose husband is now in jail in the Russian quarter and Max quickly discovers the rest of his colleagues to be old men, local women and a young Jewish boy. All the right-aged men capable of forming a local police force are either missing or dead.

But Max has an ulterior motive. He’s really there to find his brother Moritz (Logan Marshall-Green) a US soldier gone AWOL after suffering severe trauma during the liberation of Dachau. Max keeps his brother’s mental health history to himself - Moritz is a diagnosed schizophrenic, declared “Unfit for Service”, but he has slipped through army cracks to join the liberation of Europe.

He is now a fugitive in Berlin, avenging Germany’s wartime sins by capturing, torturing and murdering as many former Nazis as he can lay his hands on.

Some are by name directors - The Marriage of Maria Braun (Fassbinder); Germany Year Zero (Rossellini); Judgement at Nuremberg (Kramer); Europa (von Trier); Berlin Express (Tourneur); Ten Seconds to Hell (Aldrich). There are even comedies - A Foreign Affair (Wilder) and I Was a Male War Bride (Hawks) and a drama from a local director - Lore (Cate Shortland).

Television series are a lot harder to come by and for this reason alone Shadowplay boasts curiosity value.

It is officially billed as a French-Canadian-German co-production from ZDF (Germany), BRON Studios (Canada), Film United (Czech Republic) and Tandem Productions, a production house owned by StudioCanal and based in Munich.

The writer and co-director is the Swedish Måns Mårlind, co-creator of Bron/Broen (The Bridge) and its USA remake, and the director of Midnight Sun. The actors are mix of American, German, British and Czech and the dialogue alternates between German, English and Russian.

There’s also a German doctor known as The Angel Maker (Sebastian Koch) who runs a prostitution, extortion and kidnapping ring preying on an inexhaustible supply of young women in trouble. And a Russian officer happy to talk about the 26 million of his country men and women who died at the hands of the Nazis while he lords over the Russian quarter summarily executing any “good Germans” who cross his path.

There’s Nazis using stolen art work to bribe the Allies to fly them to South America or North Africa; references to “Hitler’s Pope”; talk of 100,000 rapes; a Jewish community in the heart of Berlin that somehow survived the Nazi wrath; and the four occupation Sectors (US, British, French and Russian) blackmailing one other as well as the hapless Berliner “scarecrows” who spend their days fixated on survival.

Is it all historically accurate? Maybe, maybe not. The lawless chaos of Berlin after the fall of Germany – once described as “all rubble and guilt” - suggests almost any story from the ruins can take on an air of plausibility.

The CGI work ranges from the convincing to the not-so-convincing, the production design is excellent, the performances are spotty (Taylor Kitsch really doesn’t have much range, does he?) and the script has a tendency to jolt the viewer with good lines that don’t seem all that relevant – “There’s always a fool at a poker game and if you don’t know who it is, then it’s you”.

Most memorable is Logan Marshall-Green: a completely arresting performance as the outlawed AWOL schizoid avenger, living in the ruins, laughing at Max’s attempts to take him home to his wife and child and almost gleefully torturing and slaughtering Nazis still hiding in Berlin.

A Tarantino character in search of his own series.