Lost in the Stars began life as a tune that would be incorporated in a quite possibly very ponderous Broadway show called Ulysses Africanus, a concoction by Kurt Weill and his most favoured collaborator the playwright Maxwell Anderson. I’m not sure who got luckier of the two when they found each other. Whatever, they had first collaborated on Knickerbocker Holiday a musical about the founding of New York. They managed to convince Walter Huston to play the lead of Peter Stuyvesant who headed up the first Dutch settlement of New Amsterdam which later became New York. Huston half sang, half recited the show’s big hit “September Song”. You can hear it if you click here. Or you can listen to a wondrous version by Lotte Lenya if you click here

Hollywood got hold of it in 1944 and Charles Coburn did duty as Stuyvesant. The film was directed by Harry Joe Brown, best known a decade later as the producer of the Ranown cycle of westerns with Randolph Scott.

Next up for the pair was Anderson’s idea for Ulysses Africanus a musical based on the life of a black slave entrusted by his master with the family silver. Ulysses becomes lost and spends eight years, including time in a minstrel show, trying to find his way home.

Kurt Weill’s biographer Foster Hirsch noted that Anderson rests his book (the script) “on a startlingly reactionary longing for the Old South, a world in which masters and slaves observed their places in a chain of being…..his book seemed to affirm the kindly master-loyal slave coupling as a social and racial ideal, the way things ought to be, and to present racial stereotypes not to contest but to reinforce them.”

The play, which contained three numbers that would have an enduring life (Lost in the Stars, A Little Gray House and Trouble Man), was ready to go in late 1939. Paul Robeson had already declined to join the cast and, after initial enthusiasm, Bill ‘Bojangles’ Robinson dropped out. When that happened Weill and Anderson abandoned he project.

Almost a decade later, Weill had urged Anderson to read Alan Paton’s “Cry the Beloved Country”. Anderson had then written to Paton seeking permission to turn it into a Broadway musical. Paton agreed though later it is said that he regretted his decision.

The major decision was for the singing to be done in concert with an onstage chorus, a departure, as Foster Hirsch notes, from Broadway convention. To direct the show Weill settled on Rouben Mamoulian. And, resurrected from Ulysses Africanus, the showstopper was what became the its title ‘Lost in the Stars’. The song was used as the climax of Act One. Alan Paton hated it. “…it was extremely painful for me to hear my humble hero in a riole that he could never have taken. It was made more painful for me by the fact that the song belonged to the death of God genre, or to put it more accurately, to the desertion-of-God genre. God had created the universe… but now He had gone away….So ‘we are lost out here in the stars’.” If you want to hear how the song sounded in the Broadway production when sung by Todd Duncan just click here.

When Daniel Mann made a film version of the play for the American Film Theatre back in the 70s, the song was almost perfunctory. Lead actor Brock Peters simply slips into a deserted church and unleashes it. No meaning, no context. They had to put it in but it was almost a distraction for the neo-realist version of Paton’s story and way way off the Weill Anderson Mamoulian stage show. A major missed opportunity. 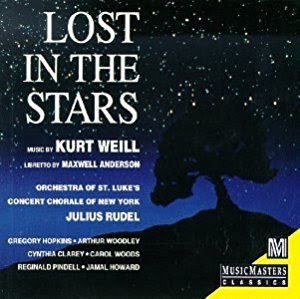 Still the song has resonated through the ages. I sprang it on some friends over dinner in Canberra long ago and looked across the room to see one person, who had never heard of it or indeed of Kurt Weill, reduced to tears. Among the many versions you can find on YouTube are those by the again wondrous  Lotte Lenya  (available on a two disc set called Lotte Lenya sings American and Berlin Theatre Songs of Kurt Weill) and by Judy Garland and Elvis Costello and the Brodsky String Quartet.