Alongside The Enigma of Kasper Hauser, Stroszek is perhaps one of the most profound films I’ve had the pleasure of watching over the years. However, I have to admit that although I feel very close to this film, I’ve only ever seen it once - sometimes the sentiment the initial viewing delivers is indelible, and so easily corrupted. It makes me reluctant to repeat the viewing experience; just in case the subsequent viewing erodes this feeling or fleeting sense of the film.
I don’t know that I felt the same about this film upon the second viewing some 25 years later, but certainly, the impressions from the first viewing of the film were so very strong that I still carry it’s ‘aura’ with me all this time. 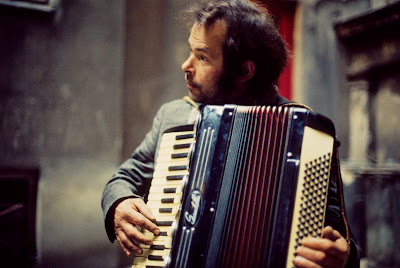 There is hardly any need to tell the story of Bruno S. It tells itself. Upon leaving prison, he returns to his home which has been looked after by his friend Scheitz, brilliantly played by Clemens Scheitz (he was fantastic as the hypnotised character in Heart of Glass). Reunited with his favourite items, including a baby grand, where he would sit and play his little melancholic ditties, Bruno S seemed to be staying off alcohol, the instruction he’s been given upon his release, and living quietly. But of course, things don’t stay like that for long.

When he chanced upon Eva, a beautiful prostitute, they let destiny play out it’s course. After Bruno is beaten up by her pimp; the trio decided at a whim, to take off to the ‘free-world’; the US of A to find Scheitz’ cousin. Where they will find that, to live, is to live in futility.

Herzog’s films are diverse and varied but always interesting (think the difference of genre and style from his early works like Aguirre, to his documentaries Grizzly Man, or Into the Inferno and to his latest Family Romance, LLC which I reviewed last year). I have followed each one faithfully and remain of the mindset that there is no other director like him. And Bruno S (Bruno Schleinstein) was a man like no other.

Bruno S was a musician, born to a prostitute mother in 1932 and unknown father. He spent his live in and out of institutions, prisons and homeless shelters. He was an auto didact who taught himself how to play the accordion, piano and glockenspiel. In 2014, Parte released a vinyl of songs recorded in 2009 in Berlin. Parte’s description: “The common themes of Bruno’s street ballads, folk songs and operettas are crime, abandonment, passion, and, perhaps most significantly, the role of the mother.” For me, his eyes tell it all, they are veiled, sometimes shocked, oftentimes an empty glare; the necessary disconnection with a world we’d rather soon forget.

During the filming of Stroszek, Herzog would often give this extraordinary person room to express himself: "Even if it takes three or four hours of non-stop Bruno speaking about injustice we … would all listen. I would always make physical contact with him. I would always grab him and just hold his wrist. Otherwise, he is a man of phenomenal abilities and phenomenal depth and suffering. It translates on the screen like nothing I have ever done translates on to a screen. He is, for me, the Unknown Soldier of Cinema."

It was clear that Herzog loved Bruno S. Stroszek was written for him; and he, in turn, was the embodiment of the ‘aura’ of this film - we don’t know where the actor begins and where Bruno S ends. Perhaps that is why for me, Stroszek(as well as Kasper Hauser) speaks so clearly of this undercurrent that we don’t often speak about - the disintegration of civilisation. It is tragic-comic in the way that one feels sickened, but also unable to turn your eyes away from the Baudrillardian phantasmagoric simulacrum that is embedded in our societies. The mobile homes, the possession of firearms, the auctioneer’s cry, the road and the wide open spaces, the dancing chickens - all this, a gift, in the name of democracy. Although I do think that Stroszekavoided the horror that Deliverancebrought me, it nonetheless pricked my heart and conscience upon the first viewing, and even over time, this small wound has refused to heal.

Below is one of the many behind-the-scene shots from the Deutsche Kinemathek website. 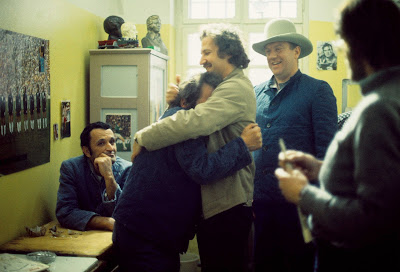 Currently available to watch on #stan