Albert Dupontel (above) has his new Adieu les cons/Bye Bye Morons on show. After his string of off-kilter successes like  Au revoir la haut/See You Up There  and Le Grand Soir, Dupontel’s new film comes highly anticipated but, while it shows the same quirky sense of humour, this one didn’t impress me as much as his earlier work.

His protagonists are less involving here. Dupontel himself plays a Cyber Security Chief intimidated by his bald headed Minister boss. Told that he must cede his position to younger talent, he resolves to end it all and rigs up a shotgun in his office, pulling the stringed trigger as he says “Adieu les cons” - but ducking so that the blast takes out the man the other side of the clapboard partition. Dupontel is branded a dangerous assassin as the forces of the law attempt to hunt him down.

At this point, his path crosses that of Virginie Efira (Le grand bain) a hairdresser who has been poisoned by the sprays she uses in her trade. Before she expires, she wants to atone to the son she gave up when an underage mother - flashback of Joséphine Hélin, her teen self, dancing in a haze of film grain.

She drags Albert out of the chaos and takes possession of his laptop which contains a record of the event he requires to establish his innocence. This Virginie uses to blackmail him into aiding her to find her now-grown child. The two pursuing their agendas make up the body of the film.

They enlist forgotten blind archivist Nicolas Marié whose files have been reduced to Braille but is able to open ten basement filing cabinet draws filled with the dossiers of teenage girls who gave up their children for adoption and then locate Virginie’s among this mountain of documentation - a mix of critical realism and fantastic elements which are the film’s and Dupontel’s stock in trade. 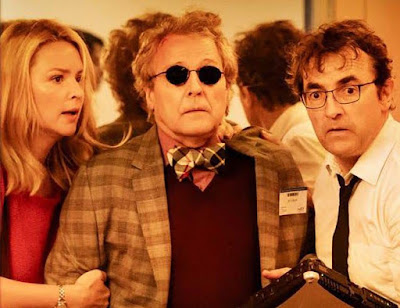 While this is not all that involving, the film does manage a couple of exceptional sequences. From memory, blind Marié guides the pair driving through his old neighborhood, though what we see reflected on their moving car’s windows is the now re-developed streetscape where only an odd derelict shop front references Mariés description - overtones of  the 1963 Mélodie en sous-sol where Jean Gabin, released after a long prison sentence, is lost in his former home district’s rebuilt streets.

The second stand out is the discovery of the son, now grown to be nerdish Bastien Ughetto unable to express his passion for appealing neighbour Marilou Aussilloux (also in Le discours). From street level Efira watches the glass walled high rise with Dupontel using his lap top to manipulate the electricals and bring the pair together. Malignant technology, the film’s subject, suddenly becomes welcoming in front of her.

In its favour, Adieu les cons is both original and big-budget accomplished. Terry Gilliam figures briefly in a fake TV commercial, a citation of Dupontel’s admiration for Monty Python.