Dusan Makavajev’s death in January 2019 went largely unremarked. Not surprising, as many years had passed since Sweet Movie, W.R. Mysteries of the Organism, Montenegro and The Coca Cola Kid induced waves of amusement or protest (more oftenboth.)  His last screen credit was in 1996 for Danske piger viser alt , aka Danish Girls Show Everything. Belying its title, this is a discreet film à sketches from various hands, sociologically illuminating but with little or no sex; a surprise, given Dusan’s lifelong ambition to épater les bourgeois.

For a while we were neighbours in Paris. His apartment was in the same building as our local supermarket -Anna Karina was another regular –  and we’d bump into one another as he inched down the aisles, hunched over a chariot filled mostly with beer.  He was in no hurry to leave, since the market was warm, and the trolley as supportive as any Zimmer frame.

Inspired by the ambiance, he described a trip he and his wife made back to Serbia for the fall of the Milosevic regime.  The hysteria had mellowed into confusion, marked by frequent marches, which the Makavajevs dutifully watched from their apartment window. Since the electricity worked only intermittently, Dusan decided to join one, mainly to keep warm. He had no idea what issue it was supporting. Curious, he worked his way to the head of the parade, where two men carried a large cloth banner.  It said, simply, Sauerkraut.

Dusan marching for sauerkraut makes more sense than him supporting a political or social issue, about most of which he was indifferent. His appetites for food and sex, on the other hand, were voracious. On deplaning in Sydney to make The Coca Cola Kid,his first demand was to visit a Reichian therapist. He was duly delivered to an innocuous bungalow somewhere along the northern beaches and didn’t emerge for four or five hours, when, refreshed by his spell in the orgone box, he directed his minder to the nearest MacDonalds.  After six Big Macs, he pronounced himself match-fit

We met a few times during the making of The Coca Cola Kid; meetingsilluminated by tales of cinematic duplicity and Yugoslavian chicanery. About our country, he was ambivalent. So much potential, so little achievement.  “Australia is Switzerland,” he decreed, “but it wants to be Texas.”

I have what the French call a beguin for Keira Knightley. It dates back to her radiant appearance in Love Actually but my impression that the screen lights up when she appears was reinforced by Pride and Prejudice and that Chanel commercial in which she roars  through Paris on a white motorcycle.  Hoping to exorcise this ensorcellement my daughter took me to see A Dangerous Method but watching Miss K. being spanked by Michael Fassbender just fanned the flames.

Wash Westmoreland’s Colette dates from 2018but escaped me until this year, since when I’ve watched it repeatedly.

The quality of mischief is rare in modern cinema; in cinema of any period, come to that. Clara Bow had it, and Irene Dunne – remember her in History Is Made At Night, teasing Charles Boyer about the tell-all telegram from his girlfriend? “Do you think it will ever replace baseball?”

Today’s actresses can guffaw, sneer or smirk, but few have a giggle in them.

Knightley’s Colette is mischievous passim.  She sets the tone as a teenager, demurely greeting Willy (Dominic West), her father’s old companion-in-arms, when he visits their home, then sneaking off for a quick shag in the hayloft.  Where any run-of-the mill actress would glower as Willy accepts the plaudits of the crowd for the book she’s written, Knightley’s mocking smile is as full of contentment as of malice.  Most cross-dressing actresses  put on drag like a uniform, where, for her, the starched white shirt and black tie, like Marlene Dietrich’s smoking, is the signal of an inner transformation, and the garments just the outer manifestation. Her sideways grin invites us into the deception. Look how we fool them!  More mischief, please.

A SNACK WITH A FLICK.

As cinemas remained dark during the Covid 19 lockdowns, optimistic forecasts suggested that a night at the movies might be given new vitality if wine, beer and even food were served at one’s seat.

Responses were decidedly salt-and-vinegar. That popcorn and Coke are how movie-houses make their money is common knowledge, but on those with bars attached, where you can drink and snack at your seat, the jury is still out. (Do they still exist in Australia? I await an encyclopedic account of their popularity, probably with photographic evidence, if not menus and greasy napkins for proof.)

In England, they were touted for a while as the wave of the future. Cup-holders sprouted on the seats in most West End cinemas, and in such civilized venues as the Everyman in Hampstead, small tables were fitted, with a loop to accommodate a bottle.

Serving tea on trays during theatrical matinees had ceased before I arrived in London but in Tokyo the practice flourished. Without the reviving contents of a bentobox, how could one make it through three hours of kabuki? However, as far as I know, the practice never took root in continental Europe – which is a little surprising, since the first public screening of a movie, by the Lumiérès, was in a cafe.

Drinking with a movie did survive, for a while at least, in provincial venues where, since there was no actual cinema, films were screened in the beer garden behind a bar. You sat on stackable chairs watching the image projected on a white painted wall, the sound-track compromised by poor amplification and the conversation from inside. Periodically, and apparently at random, the film stopped for visits to the loo, and replenishments of Stella Artois.

We survived smoking in cinemas so perhaps we could become accustomed to food and drink. I’d ask only that noise be kept to a minimum. There are few distractions more galling than the rustle of bonbons being unwrapped and fingers rummaging in tubs of popcorn. An old friend found them intolerable. At the first crackle, he was on his feet, bawling at the offender “What are you doing? Building a nest?” 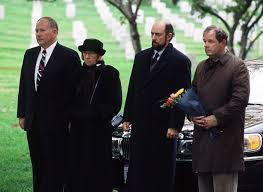 Some time every Christmas, I find a pretext to watch the episode In Excelsis Deo from Season 1 of The West Wing.

I saw it first in Byron Bay. as a guest of the Writers Festival.  Insomniac with jetlag, I fell into the series, which was new to me. Once the sun came up, I rented the whole first year and binge-watched it over two or three days.   In Excelsis Deo was the sixth episode, and a Christmas show, but though I was seeing it with curtains drawn against the glare of the Australian sun,  its setting in a wintry Washington DC felt more real than what waited outside. I hardly knew Australia any more but had lived for some time in Virginia, not far from DC.  Everything conspired to validate Proust’s insight that places and things exist only insofar as we remember them, “and houses, trees and avenues are as fugitive, alas, as the years.”

The issues of In Excelsis Deo rang particularly true. A family member whom I hadn’t seen since infancy lived near Byron Bay, and a meeting had been arranged with her and various siblings. It was not an encounter to which I was looking forward.

Presidential speech-writer Toby Ziegler (Richard Schiff), the White House’s resident conscience, is called by the police to explain why a homeless man who died of exposure has his card in his pocket. The explanation is innocent, but Toby notices that the man, as a Marine, was entitled to be buried in Arlington. Responding to impulses that he never explains, but which need no explanation, he arranges a military funeral, even though it means forging the president’s signature.  The sole festive element occurs at the conclusion, which cuts between a White House carol service and the burial at Arlington.  The loneliness and dignity of one ritual neutralises the other’s sentimentality. Everyone at the funeral looks believably strained. I liked the nervous start of the mourners at the gunfire of the salute.

My family meeting, though not exactly pleasurable, went better than expected. Maybe the film helped.  I was amused to read later that a fight erupted between Sorkin and co-writer Rick Cleveland over credits for the episode (which won an Emmy for Outstanding Writing for a Drama Series.) Someone didn’t get the memo about tidings of comfort and joy. 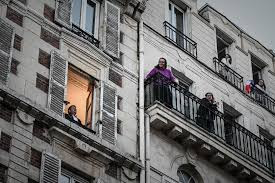 Shortly after the pandemic started to spread, reports from China, disseminated by social media, described anonymous voices in the night shouting from the roofs of apartment buildings. Many people thought they said "Keep up the fight!"

As communities across the world imposed quarantines and curfews, a custom grew up of people confined to inner city apartments coming to their windows or balconies each evening and applauding. In Italy, some sang operatic arias and popular songs, chanted football mantras, played instruments and waved flags. In Britain, Spain, Turkey and India, they did so at 7pm, but in Spain and France, in recognition of a preference to eat late, the applause took place at 8.

In Paris, quarantine began at noon on March 17, 2020. It would last for 55 days.  Shops, offices, schools, restaurants, cinemas and museums closed. Only food shops remained open. Initially we were allowed out for one hour a day. We had to wear a mask and carry a document indicating where we lived and at what time we left home. Transgressors were fined, even jailed.  Paris became a ghost town – except for those moments each night when, as a few distant church bells ceased pealing, windows opened or people came out onto their balconies, and applauded.

My wife and I, as well as our daughter and anyone else who happened to be in the apartment, automatically stepped out onto the terrace and joined in. We waved and smiled to neighbors across the narrow canyon of rue de l’Odéon – a bonding in adversity that soon became as important as the volume of applause.

Naturally we thought of Network, the 1976 film written by Paddy Chayefsky. It imagined a similar outpouring of solidarity and discontent when, egged on by a television news-reader in the grip of paranoid schizophrenic delusions (Peter Finch, in a performance that earned a posthumous Oscar),  people all over the United States opened their windows and shouted “I’m mad as hell and I’m not going to take it anymore!”  But who were we applauding? This was as vague as what the protestors of Network  were “not going to take.” Certainly the medical services deserved our appreciation. But essentially, our “hopes and prayers”, to use the ruling cliché, were not only with them. We were also, like those fictional crowds in 1976, encouraging ourselves.