The Current Cinema and streaming on Netflix - Barrie Pattison examines MANK ( David Fincher, USA 2020) and movies about movies that came before. 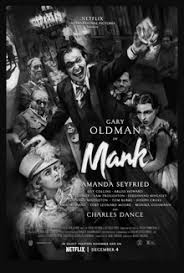 Films about films go back pretty much as far as movies. Chaplin was A Film Johnnie  in 1914. Maurice Tourneur’s uncharacteristic 1917 A Girl’s Folly played out in the American Film Capital - Fort Lee, New Jersey. It’s not hard to trace a history of these Movie Movies in which we can see shadowy representations of real people - Barbara Stanwyck and Frank Fay in What Price Hollywood became A Star Is Born, the Selznicks and Val Lewton in The Bad and the Beautiful, John Garfield, who’d played in the Broadway season, in The Big Knife. Von Sternberg and Dietrich inThe Legend of Lylah Clare. Fitzgerald‘s Irving Thalberg is imported for The Last Tycoon... and, of course, there’s Sunset Boulevard.

The bio film - The Jolson Story, Man of a Thousand Faces, The Buster Keaton Story orThe Best Things in Life Are Free - is a sub species of these, taking pains to exclude people who might sue.

Films in which the movie celebrities are named and impersonated is a more recent departure - Richard Attenborough’s Chaplin, Maurice Tourneur in Bertrand Tavernier’s 2002 Laisser Passer/Safe Conduct, Howard Hughes (already on screen in Max Ophuls’ Caught) in Melvin and Howard  and The Aviator, Eddie Mannix in Hail Caesar, Dalton Trumbo, Hedda Hopper (and Sam Wood) in Trumbo.

Despite this, and the list is nowhere near complete, we still don’t have a movie about D. W. Griffith, though he is glimpsed as a character in Peter Bogdanovich’s 1976 Nickelodeon and the Tavianis'1987 Good Morning Babylon.There is Jacques Rouffio’s 1995 V'la l'cinéma ou le roman de Charles Pathé and Rebecca Zlotowski’s 2017 Planetarium with Emmanuel Salinger as a disguised Bernard Nathan - but no fiction film about Louis Feuillade - though we do have Scorsese’s splendid Meliés movie Hugo. We’ve got a couple of screen Hitchcocks and the fatuous The Magic Box about William Friese Greene but not one about Maurice Elvey. There’s even Steve Jodrell’s1987 Tudawali which offers Frank Wilson as Charles Chauvel.

Mank is another in the cycle which attempts to turn Hollywood’s past into relevant drama. This is not our first Orson Welles story. The Joseph Sargent-Nicholas Meyer The Night That Panicked America, RKO 281 (John Malkovich as Herman Mankiewicz) and Richard Linklater’s Me & Orson Welles are already circulating.

Mank is a step downwards, starting with Joseph Cross as newly arrived Charles Lederer being rushed past the walls decked with Gary Cooper Virginian posters, into the Paramount writer’s room. He meets Sid Perelman, George S. Kaufman, Charles MacArthur & Ben Hecht and the Mankiewicz brothers all drawn by the promise “Millions are to be grabbed out here, and your only competition is idiots,” that has been fed them all.

They are hustled into the producer’s office where he is called on to improvise the ending of a plot they are pitching for Josef Von Sternberg. You’ve got to ask where are the people who did the great writing of the era - Grover Jones, Bartlett McCormack, John Monk Saunders - while this nest of disgruntled East Coast wordsmiths are selling their integrity for the Hollywood dollar.

How many of the audience will have heard of Lederer (Kiss of Death and several of Howard Hawks’ best movies) or the others in the film’s orgy of name dropping isn’t all that important because they vanish from the intrigue. It settles on Gary Oldman’s Herman Mankiewicz writing Citizen Kane, while an alcoholic under the care of full time nurse Lily Collins and masseuse Monika Gossmann, refugees from WW2 in Europe. Sam Troughton’s John Houseman (a ridiculous caricature) sweeps though from time to time and Tom Burke’s resonant Orson Welles ‘phones in. We start hearing about Louis B. Mayer, Marion Davies and William Randolph Hearst as the film tries to mimic Kane with flashbacks identified by white typewriter captions across the monochrome ‘scope frame.

By this time the casual moviegoer will be trying to check his ticket stub in the dark to see where he made his mistake trying to find the auditorium where they are playing Tenet.

A curious aspect of these bogus bios is that they continue to portray their characters agonising about the political left. Hollywood Cavalcade has Alice Faye tearing up about the unemployed. Hail Caesar shows star George Clooney repeating slogans he absorbed during his kidnap. Room Service offers a coal miner playwright who works by the light in his hat.

Which brings us back to Mank rather circuitously turning out to be a ‘reason why’ film. Why did Orson Welles sink his teeth into someone as influential as William Randolph Hearst?

The film shows us Oldman’s Herman Mankiewicz as a witness to tycoon Charles Dance’s Hearst destroying the political career of Upton Sinclair (Bill Nye), novelist and social commentator (a rare moment of reflection says people have him confused with Sinclair Lewis who wrote “Elmer Gantry”) This uses newspapers and movies including a fake newsreel campaign executed by Jamie McShane’s self-destructive film editor, who wants to direct. The film demands we distinguish between socialism and communism as a key plot point. They are already pushing it up hill.

So appalled is Oldman/Mankiewicz that in a fit of alcohol-fueled rage he berates Charles Dance’s Hearst at a pirate-themed costume dinner party at St. Simeon, where indignant Arliss Howard as Louis B. Mayer reveals that half Mank’s salary is paid by Hearst “Not for what you write but for what you say.” Hearst gets the last word, ushering the drunken writer to the door with his story about the emperor’s fool.

It is curious that Dance played Griffith in Good Morning Babylon, Robert Flaherty in Claude Massot’s 1995 Kabloonak/Nanook and Sergei Eisenstein who was short, fat and bald, in Declan O'Dwyer’s 1996 short  Potemkin: The Runner's Cut. Film makers seem to picture major figures in their industry’s past as well-spoken Britishers.

Mank continues with an attempt to shaft Welles for claiming authorship of the film’s Oscar-prize MSS, which has more than a hint of an Upton Sinclair novel, and they give a jumbled account of the attempts made to prevent the release of Citizen Kane.

I dislike director David Fincher‘s Fight Club and quite enjoy his The Social Network. Despite the giant leap in aspiration his dad’s script represents here, this one just irritated me. They can’t even get their facts straight, with Herman Mankiewicz’ actual and largely mediocre career extending years beyond the appearance of Citizen Kane. One of the few resonant moments however is Tom Pelphrey as brother Joe, future writer-director of All About Eveand Guys & Dolls, berating Oldman only to end by telling him the giant Kane MSS is the best thing he has done.

Hollywood seems convinced that Citizen Kane is a touchstone that will reveal the community’s inner nature. So far the case is not proven.

Whatever message the makers wanted to spread, doesn’t seem to have taken. About the only consistent note which can be found among the reviewers’ faint praise is admiration for Amanda Seyfried (my favorite movie Cosette for the musical Les Miserables) doing a lively and appealing turn as Marion Davies. Her dialogue with Oldman at dusk among the animals of St. Simeon’s zoo is the nearest thing this scattered account has to a center.