The Current Cinema - Barrie Pattison considers thievery at the movies via a viewing of THE HONEST THIEF (Mark Williams, USA, 2020) 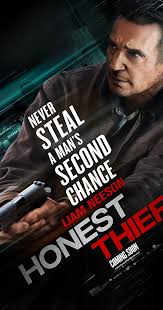 Last week I saw The Honest Thief  at the George Street Event complex.

About an hour in the fire alarm went off. Smoke was coming out of one of the restaurant concessions next door. We piled out onto the street where about twenty people (exiting from twelve auditoria) stood around waiting for the valiant firemen to go through their act.

I made a point of having the manager, who was ushering us about, assure me that the screening would pick up at the point we left and was told this was in hand. When we came back they started the digital file from the beginning again and I doubled out to find her and alert her to the problem. She phoned the box and reassured me that it was being fixed. Needless to say, the piece ran all the way through without any catch up. I’d heard of this problem. After we finished, the place was shuttered and there was no one to ask for information.

I used to watch movies round twice all the time but that was when I had a full head of hair. Doing it again now was a curious process. I found myself picking up on detail about which I didn’t really want to know - the girl who comes down the FBI corridor twice.

The Honest Thief  is presentable multiplex fare with Liam Neeson still a plausible action hero at an age when he should be playing the hero’s grandpa. It didn’t really repay the close scrutiny.

The moral of this story is buried in the fact that the staff had no control over the show. Something which would have been routine (if demanding) in a celluloid presentation, defeated them.

At a time when theatrical film shows are under attack on any number of fronts, this wasn’t encouraging.