Defending Cinephilia 2020 (6) - Janice Tong's Ruminations on a Theme, or, an Invitation to Dance 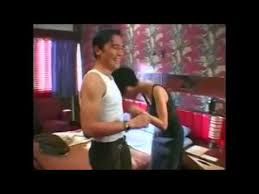 I remember starting 2020 joyful in my defence of cinephilia. I had been rereading a youthful (thus passionate and unfinished and unpublished) essay of mine titled “One-and-one-third second - against Susan Sontag’s The Decay of Cinema” and plundering it for ideas for my novel (also unpublished). It was full of images and descriptions about early Lumière films, and arguments about how cinema itself has to make its meaning elsewhere; outside of studios and with the suggestion that perhaps even the word ‘cinema’ needs to be understood on a different level. So it seems apt that I should end the year in the same vein - defending cinephilia - in whatever morphic form it now appears to us.

As I pored through the text, I found a sketchily-drawn silhouette of a person dancing on the margins. Whilst I’ve long forgotten what made me draw this lone dancer - perhaps I was dreaming of the infamous dance sequence in Bande à part, or, the sultry Anita Ekberg in La Dolce Vita; today, as I studied this image again, it set me off on a daydream - of Babylon Berlin’s superb dance sequence Zu Asche, Zu Staub (To Ash, To Dust), and the cool clip of Maggie Cheung and Tony Leung dancing in one of the outtakes  (image above, click on the link to see it) from In the Mood for Love; both are magical and uplifting. And we all could do with a bit of magic to see us through the last weeks of 2020.

Anyhow, the sketch made me think of all those wonderful moments of dance that are in our collective memories, and thought perhaps this was an invitation for me to practice some dance moves.

A nod to Mubi, Netflix, SBS on demand and other streaming platforms

As a list-maker, I’ve dutifully noted that I’ve watched 210 films thus far in 2020 and with that knowledge, a little too afraid to count how many TV series (mostly British crime dramas or Nordic thrillers) I’ve consumed in this seemingly continuous day-long year.

As lockdown began in March, I’m not sure what I would have done if I was not already a subscriber to a handful of streaming platforms. I learnt to be patient as overseas shipments of DVDs I had ordered were delayed (the Louis Malle box set arrived after a long 4 months) and suppressed my dismay when the French Film Festival that I’ve attended with my husband for the past 20 odd years went on hiatus (we managed to see a few films when the cinemas reopened); and ended with an unwillingness to watch festival films on the computer (you have the draw the line somewhere).

It was roundabout then that I decided instead to have a film festival at home. We have a big TV and a handful of subscriptions; and the result was a surprising one!

The first, was the discovery of Rita Azevedo Gomes’s films on Mubi - of the four films I saw, A Woman’s Revenge (2012) and Fragile as the World (2001) were absolute stand-outs. One is more formal in structure with glorious tableaux vivants; and both were equally hallucinatory in its portrayal of the dance of life and death.

The next were Élise Girard films, starting with Strange Birds (2017) that I was lucky enough to catch on SBS on demand one night. And I was so taken with this little story - to watch a mature but still commanding and handsome Jean Sorel paired with Isabelle Huppert’s daughter Lolita Chammah, in a charming story of finding your place in the world - so much so that I ordered Girard’s first film Bellevue Tokyo (2010) on DVD straight away. It was this film that in turn led me to a movie theatre in Paris’ 5th called Cinéma le Grand Action.

This cinema had to close their doors earlier this year (they reopened on June 22nd after 100 days of lockdown, and sadly had to close their doors again on December 11th, and this time until 2021). During their first closure, they kept screening a film a day in rotation in their theatre rooms. I loved this idea so much that I followed their progress and made a note of the films they screened across May and into June, (see image below). Each film they screened during this time featured a scene that had something to do with film; whether it was showing spectators in the darkened cinema, or outside the theatre with film posters as a backdrop; or at the candy counter or queuing at the ticket booth. I tried to imagine these darkened corridors of Cinéma Le Grand Action where films were being projected to a room without an audience. It held a certain fascination for me - the spirit of film was in the essence of those screenings, and I can’t help but wonder what kind of dance was to be dreamed there? 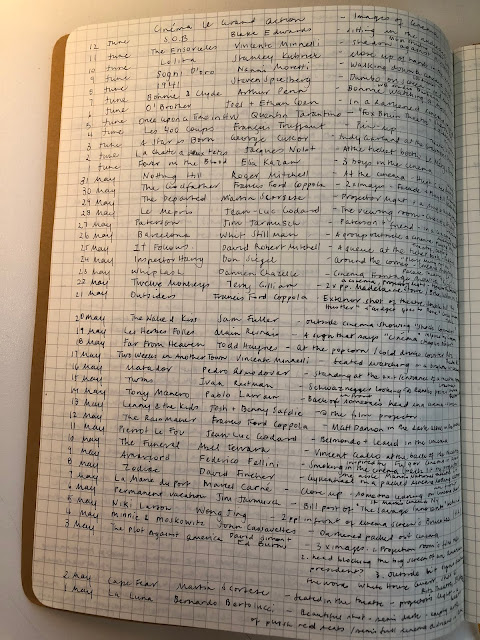 As our home film festival progressed, we watched a bunch of fantastic films that we hadn’t seen before but should have: Louis Malle’s underrated gem The Fire Within (1963) this film induced that same melancholic yearning as Ascenseur pour l'échafaud. Also, Bernard Queysanne, Georges Perec’s absolutely brilliant The Man Who Sleeps (1974), reminiscent of Chris Marker’s essay films, is actually available to Watch on YouTube. A lesser known documentary Rohmer in Paris by Richard Misek (clearly a cinephile) whose film led me to start rewatching Rohmer's entire oeuvre, from his early works in the late 50s (one with André Bazin as the protagonist and J-LG as the journalist, with many scenes shot at Cahiers du Cinéma’s then office) to his Six Moral Tales and Comedies and Proverbs. We are still waiting for the Tales of the Four Seasons to be screened, but count ourselves lucky that both Mubi and Stan are both streaming these films in Australia; or else, you can buy Rohmer’s extravagant box set if you click on this link to Potemkine Films in Paris.

There were also a handful of films that are just outright exquisite: the wonderful Polish director Zanussi’s latest film Ether(2018) - it affected me as much as the first film I saw of his The Structure of Crystals(1969) though the genres were so entirely different. Lastly, my favourite, Bi Gan’s Long Day’s Journey into the Night (2018), a layered imagining of forgotten love, the single shot dream-like second half is a hypnotic dance of love and memory, or poppy and recollection after Celan’s poem, as referenced by the director.

Are there such things as ‘new films’ anymore?

I’ve always been cynical as to what passes for cinema these days. So I tend to call anything that is not ‘worthy’ of this title ‘movies’, especially the more mainstream blockbusters, and this label even applies to some of the indie films, (well, they’re just not that indie any more). I shall refrain from naming these titles here.

Instead, here is a short list of new films that took me by surprise this year. By new, I mean to say they’ve come out in either 2019 or 2020 that I saw this year; be it at the cinema, streamed or on DVD. Ok, I’m counting some 2018 ones as well, as it’s hard to get distribution in Australia for many of these films.

I’m only recommending one series that I loved in 2020 and would rewatch again immediately - Giri / Hajiwhich is screening on Netflix. So much can be said about this brilliant and captivating series; with a very clever and well cast cross-pollination of actors from the UK and Japan. Even the episode recap is noteworthy - in that is told anime-style. At its heart, this story is a dance of relationships, weaving love, principles, and family in its rhythms. But nothing beats the actual ‘dance’ sequence at the end of the series - not to give too much away, this sequence literally takes your breath away.

If you’ve already seen this and would like others to while away your time during the holidays, then try the following:

My Brilliant Friend (2018, 2020) Italy - try and savour this brilliant series on friendship, love, philosophy set in Naples in the early 50s.

Criminal: UK, France, Spain, Germany (2019) Great concept - all 4 franchises in the series (Criminal: UK is in Season 2) are brilliantly scripted and acted. 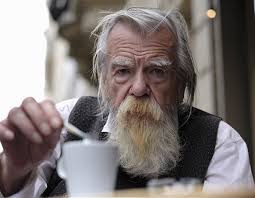 Taking a bow to Michael Lonsdale

I’ve been following Opéra national de Paris’ short film series, 3eme Scene  for a couple of years now. At the beginning of this year, director Arnaud des Pallières released a spectacular short film called DEGAS ET MOI  (click on the caps) featuring the formidable Michael Lonsdale (pictured above), who sadly passed away in September this year. This may well be his last film appearance. There are no subtitles for this film, which is set out in two parts, but you can pretty much watch it without understanding the voiceover in the second. In the first part, Lonsdale’s ageing Degas is a total embodiment of the painter, as is Bastien Vivès’ young Degas; who is filmed making sketches in pastels of ballerinas in class. I reached out to Vivès earlier this year, who told me that he gave away his beautiful sketches to the actors and crew that day to say thank you. Dance, beauty, movement, longing, artistry, dreams - are all there in this short 20 mins film (below). 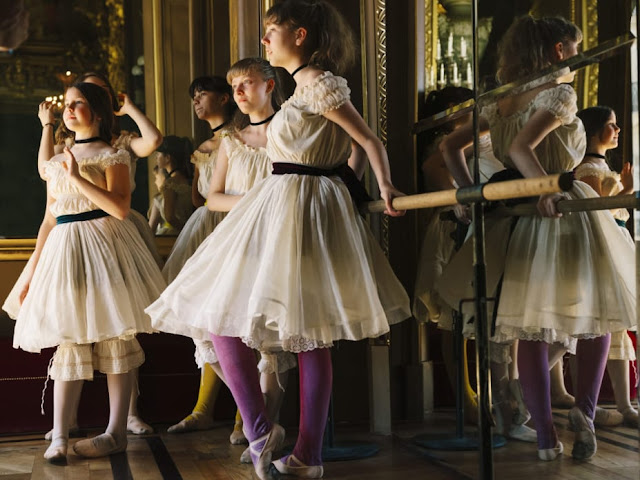 My new year’s resolution is simple: find any opportunity to dance. Because? Well, just because. And I’m thinking of dance in a metaphorical sense too, in our dealings with people, in the dance of the seasons, in my head and in the boulevards on the big screen.

And to do this with a little help from my current playlist, which is set to play songs by Clio. She’s a French chanteuse who sings about Eric Rohmer and Romy Schneider. And also, the dance sequence from Philippe Garrel’s film Les Amants Reguliers, put it on YouTube, on repeat - and LOUD; featuring This Time Tomorrow by The Kinks, it never fails to get you in the mood.