ON WONG KAR-WAI - Janice Tong writes on HAPPY TOGETHER (Hong Kong, 1997 ) a key film in LOVE & NEON: THE CINEMA OF WONG KAR WAI presented by the Sydney Film Festival at the Art Gallery of NSW and the Dendy Newtown 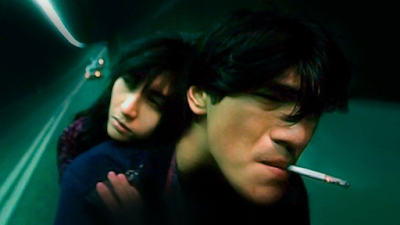 The Aesthetics of Distance

And there love slow and long, / There love and die among / Those scenes that image you… / There, there is nothing else but grace and measure, / Richness, quietness, and pleasure.

Going there we gain a day. Leaving, we lose nothing.

On leaving the cinema, Wong Kar-wai’s films often come back to us in flashes, making us catch our breaths, and suffusing our senses like that of a richly aromatic fragrance. Wong’s luxurious assemblage of cinematographic images has an affective quality and, as such, the images and the mood carried with them linger in our collective memories. So much so that the narratives of Wong’s films need not hang together in a linear or teleological fashion, since what consumes us entirely are these remnants of images, drifting in from his different films, which weave together an intricate fabric of a certain kind of aesthetics – the time-worn human experience of love.

Take the end sequence of Fallen Angels  (above), for example, where the agent (Michelle Reis) contemplates the winter chill since she did away with her partner. Wong juxtaposes her nonchalance with one of his most poetical image sequences that ends the film. Shown in slow motion the agent is riding pillion with He Qiwu (Takeshi Kaneshiro), we see her rest her cheek against his shoulders half dreamily, and as the bike moves out of the harbour tunnel the shot pulls away from a close-up of this couple to pan upwards. The camera just catches He Qiwu as he exhales a puff of cigarette smoke, which drifts up and dissipates into a pre-dawn sky. The agent’s voice-over tells us: “When I was leaving, I asked him for a lift home. It has been a long time since I’ve been on a bike and a long time since I’ve been so close to someone. I know this road is not far, and very soon I will be at my destination…but at this very moment I feel such warmth”. In these small details we find the boundless possibilities of human relations.

Wong’s films are an attempt at capturing the distances between people, that charged space where all interaction occurs, a space which simultaneously conjoins and separates – which is as tenuous and decisive as that small strip of back leader between cinematographic frames.

Love and its endless edifice, tempered by time, memory, histories and existences, is the core theme of Wong’s eight films to date. He imbues love’s fragile and fleeting moments with close-ups, slow motion, step-printing techniques and a luscious colour palette, and as a result its effects, even that of disillusionment, are to be savoured. These fragmentary episodes are like splinters of memory that pierce our existences, without which we would not have experienced the complexities of love, and without which our lives would somehow be less rich. 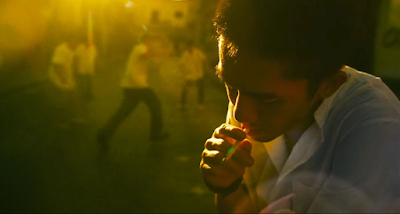 It is difficult to shake off the slow ache of love that is recalled so perfectly in the ghostly images of Ho Po-Wing (Leslie Cheung) and Lai Yiu-Fai (Tony Leung) as they sit in the back of a taxi in Happy Together. When Po-Wing lets his head fall onto Yiu-Fai’s shoulders we are taken to another space and time by Astor Piazolla’s music and the golden and green glow of lights reflecting on their fatigued and sullen faces. It is as if the whole of their time in Buenos Aires had culminated into that single moment, where we are given a glimpse into the abyss of loving someone, of giving yourself over to your lover with the full knowledge of the loneliness that comes with this gift, a melancholic brooding that pervades through your entire being. For Wong, the distance between two people almost always articulates the distance of time – each of us are bounded by the different temporalities that occupy our existences – and not always the distance of space. 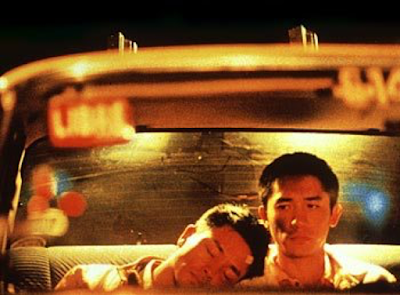 In Francis Ford Coppola’s The Conversation (1974), editor Walter Murch cut the film according to the rhythms of an eye blinking, anchoring this duration to that of the time needed to process a thought pattern. In doing so, Murch kept to the impulse of action, that is, to follow through a chain of events that would allow the viewer to partake in the movements and rhythms of Gene Hackman. This space of action is in turn what propels the narrative forwards. Wong’s long time collaborator, art director and editor, William Chang brings a much more languid and elegiac quality to many of Wong’s films, and one in which the rhythm is more akin to the state of dreaming, or recollecting, and these are images which do not necessarily have any bearing upon the action or force of the narrative. Chris Doyle’s gliding camera work and split framing reinforces an intimacy that is suggestive of the mesmerizing pull of this frame of mind. We find in place of action-images, images that are described by Gilles Deleuze as “pure states of time”. Time which no longer responds to spatial or linear co-ordinates, but which comes to the fore by freeing itself from any notions of chronology, teleology, or order. 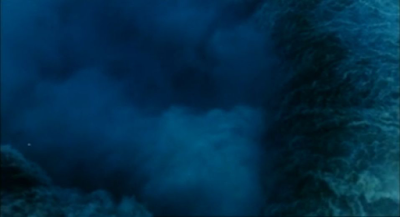 Time, then, is embedded into Wong’s images in different ways as nostalgia, like the magnificent slow-motion overhead shots of the Iguaçu Falls in Happy Together  (above). These images seem to have the capacity to displace the inherent temporalities of the characters in the film. The images lie outside of diegetic time and mobilise something more akin to what Walter Benjamin calls epic memory. Or time can be seen in the gestures of characters, such as Faye (Faye Wong) in Chungking Express, who is weighed down by waiting, hence her constant state of daydreaming, which left her with no choice but to fall asleep when she finally found herself alone with Cop 663 (Tony Leung) in his apartment. 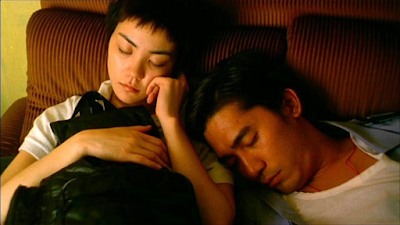 These images of time bear little resemblance to the kind of divisible and measurable clock-time that are shown by the many flip-card clocks or clock faces in Wong’s films. For example, the clock that is featured in In the Mood for Love has little or no relation to the voice-overs that accompany them. In fact, in last third of the film, when Mr Chow (Tony Leung) leaves for Singapore, the interleaving of memory images makes it an impossible task to hold down a valid chronology. Yet, when the film does show events in history, such as de Gaulle’s visit to Vietnam, these events seem to have little affect on the relationship of Su LiZhen (Maggie Cheung) and Chow Mo-Wan. We know this because the film asks us to resist teleological inclinations by offering up an opaque and ambiguous ending, which yields the heart of this film to its own secret. It seems that Wong’s distances of longing are irreconcilable ones. 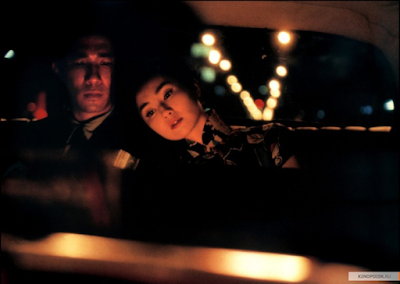 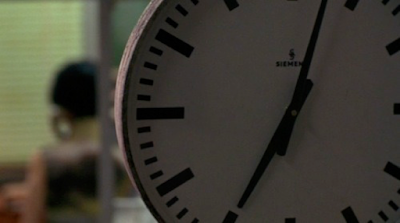 For his sixth film, Happy Together, which was finished in April 1997 – barely 3 months before the hand-over of Hong Kong to mainland China – Wong had to travel to the “end of the world”, to a world far away from Hong Kong, to write his own histories of Hong Kong. His love for the city of Hong Kong finds Buenos Aires as a time outside of history and away from the preoccupations of the world. For Wong, it is by this distance, be it temporal or spatial, that desire is borne. This space in between is thus an affective space, one that is charged with a sense of nostalgia. In Wong’s films this desire is intrinsically tied to his own desires towards the writing of a history in images, in which a future would not be possible without a past. 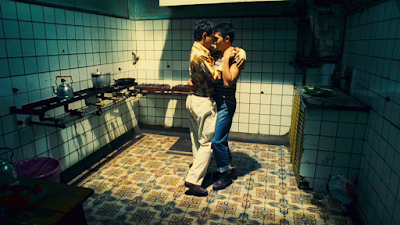 Happy Together is a film that has come at the end of an era, and carries with it the melancholic air of a century in decline. Hong Kong in 1997 seemed to be experiencing the end of the millennium ahead of time, and, as a result, Happy Together bares the scar of decadence. From its Latin roots, decadentia, meaning the destructiveness of time and the fatality of decline, signalled a general state or fall from a state of sophistication. The atrophic energy of the deterioration of time is laden in the mise-en-scène, from the blue-hued kitchen where Tony and Leslie danced the tango so passionately and in Leslie’s poise throughout the film, which has the arrogance of a jaded dandy. The come-hither looks he gives is almost always tinged with a brooding sense of indifference at the gay tango bar which he frequents as a good-time boy. Leslie fills the screen with a natural sophistication and an air of nonchalance that seems to come so naturally to this actor. Evocatively too, this film pays tribute to Leslie who took his own life in April 2003, (we see in Buenos Aires Zero Degrees, a documentary on the making of Happy Together, that ironically, a suicide for in fact planned for Tony Leung’s character); a tragic romantic left only with the ruins of love, he laid his soul bare in his last collaboration with Wong. 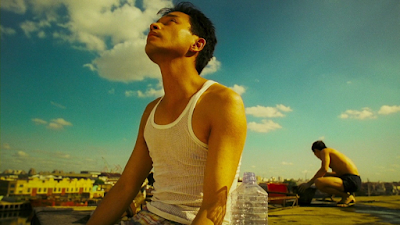 Po-Wing and Yiu-Fai are like exiled lovers who drift aimlessly, and as if by accident, to the farthest corner away from their home, and once there, with nothing to hold them to the place, they stay. In the faded and sickly yellow and green wallpapered room, the couple are possessed by ennui, their bodies covered over by a sumptuous orange blanket, where they emerge occasionally, and narcissistically but detachedly gaze upon their images reflected from a rust stained mirror, marking and scarring their bodies in the reflection with ink-like blotches. They recall the 19th century poet Baudelaire, who is linked to the decadent movement and who’s Invitation to Voyage (1854) captures this sense of foreboding and disenchantment luminously, where the distant land is but only within the reaches of one’s own mind. 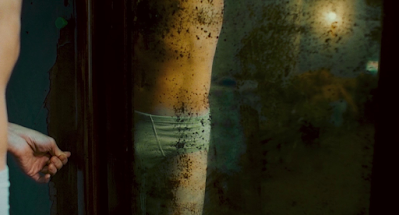 In a way, Po-Wing and Yiu-Fai’s predicament is echoed by Wong’s own self-imposed exile in the making of this film, which also repeats Henry Miller’s poet in his novel the Tropic of Capricorn (the Tropic of Capricorn cuts through Argentina and on the longest day of the year, the sun can be found directly overhead – a day without shadows). This self-inflicted distancing brings us to the image if the flip-card clock turning to 00:00:00 towards the end of the film. Even as it alludes to the image of the big clock at Tiananmen Square changing over to midnight during the handover, as a cinematic image the zero hour comes to represent the “timelessness” of time. Time that can no longer measure chronology, but is in fact in ruins – a ruinous time, like the characters’ failed relationship, or the sound of Yiu-Fai’s sobbing which Little Cheung leaves behind at Tierra del Fuego – the end of the world. The impulse of ruined time, and its twin, ruined love, is not to proceed, but to endlessly repeat – like Po-Wing’s axiom in the film – “let us start over again”. 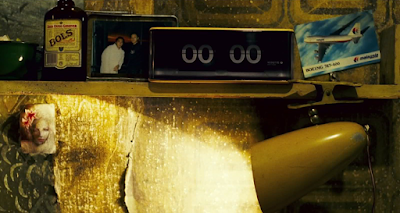 Published on Janice Tong’s blog Night – thoughts on cinema. Originally published by Madman Entertainment on the DVD booklet for their Director’s Suite release of Wong Kar-wai’s film, Happy Together, 2005.