I would like to acknowledge that we are here today on the land of the Gadigal and Bidjigal peoples who traditionally occupied the Sydney coast. I acknowledge Aboriginal or Torres Strait Islander people attending today and I pay my respects to Elders past and present.

I’d also like to thank Geoff Gardner and Cinema Reborn for asking me to introduce The Juniper Tree, Nietzchka Keene’s adaptation of a Brothers Grimm fairy tale. After I had looked at it and said yes, Geoff asked if they could screen my experimental short film Shadow Panic with it. Of course I said yes.

The Juniper Tree was shot in glorious 35mm black and white in Iceland in the late 1980s. It was made on a very low budget with a small cast and crew, yet it is spectacular in its vision and meticulous in its detail. Keene’s mysterious and compelling mise-en-scène reminded me of both Bergman and Maya Deren. Sadly Keene died in 2004 at the age of 52, leaving behind a number of half-finished projects, as well as all the original Juniper Treematerials, carefully archived and able to be sourced for this stunning 4K restoration.

Shadow Panic was shot in 16mm colour in Sydney in 1989 and remastered in 2020 in 2K by Ray Argall from Piccolo films. We worked from a high definition scan I had made in 2015, in order to use clips in another film. The scan was made from the ungraded inter-positive held in the archive.

The Juniper Tree has been described as a feminist adaptation of a Brothers Grimm tale. It was also Björk’s first film role. Keene had wanted a 13-year-old girl for the part, but eventually chose Björk, who was 21 at the time.  Her mesmerising performance is at the centre of this film, for she effortlessly inhabits the childlike world of a 13-year-old girl, who, like her mother before her, has the magical power to ‘see’ things that other people can’t.

Keene’s adaptation shifts the point of view from the little boy in the original Brothers Grimm tale to Björk’s character, Margit, making her the protagonist. Keene also shifts the location from Europe to Iceland, setting it in late medieval times and opening the story with two sisters whose mother has just been burnt as a witch. The Brothers Grimm stories were based on folk tales, fairy stories and oral histories they collected and translated, and first published in 1812.

The original tale of The Juniper Tree is very important in folklore, for it is only one of two in the Grimms’ collection printed in dialect, and it contains motifs that possibly hark back several thousand years.  It’s a gruesome and bloody tale of an evil stepmother, who bullies her stepson and then murders him because she wants her biological daughter to inherit everything. She chops him up and cooks him in a stew, which her unknowing husband hungrily eats. Her heartbroken daughter, who loved her half-brother, buries his bones under the Juniper tree and weeps for him. Later the boy reappears in the tree as a little bird, singing ‘My mother slew me, my father ate me.’ Hearing the song, the woman runs out of the house and the little bird drops a millstone on her head killing her. Then the little boy reappears and he and his father and half-sister all live happily ever after.

While there are several hundred versions of The Juniper Tree, Keene’s adaptation radically transforms the narrative of the wicked stepmother, offering a more complex and layered representation of women’s struggle to survive in a time when single women were often persecuted and burnt as witches. While Keene changed the protagonist and parts of the story, she was careful to retain both the essential elements of the story and the ancient motifs that had found their way down, through the ages, into the version the Brothers Grimm wrote down. Keene also added things – things that might help tell the story through women’s eyes – perhaps things not considered important in the retelling or things that had been deliberately left out.

Keene had studied German linguistics as well as Icelandic languages and spent a year in Iceland researching locations and costumes for the film, as well as collecting ancient women’s songs, herbal remedies and spells. Björk sings one of these songs when we first meet her as Margit in the film, and we soon see her older sister, Katla, who becomes stepmother to the little boy, secretly practising spells in a desperate attempt to survive and protect her younger sister. While her older sister grinds herbs and practises spells, it is Margit who has the power to see things no one else can and, because we see through her eyes, we can see them too. In one extraordinary moment worthy of Bergman, Deren or Lynch, Margit crosses the boundary between the living and dead, and literally ‘sees’ and ‘puts her hand through’ the image of, or representation of, her dead mother.

Keene was an academic as well as a filmmaker and would have been well aware of the debates raging in the 1980s around the representation of women. It was a time when women filmmakers like myself were wrestling with feminist film theory and ideas around the male gaze. How might we create films that challenged the male gaze we had all been brought up to accept as normal? How might we see through women’s eyes and not through men’s eyes? And how might we uncover the repressed stories of women that had been lost, forgotten or neglected?  Both The Juniper Tree and Shadow Panic were completed in 1989 and while they are very different films, and made on different sides of the world, it is these questions that, to some extent, they both share.

Keene wanted to create a mood, an atmosphere or a ‘world’ where we, the audience, might ‘see through’ women’s eyes: a women’s world of survival, where good witches were human and made mistakes; where spells didn’t always work and where many women became isolated, alone and persecuted.

In Shadow Panic I wanted to experiment with ‘seeing’ through women’s eyes too. In it, three women’s ‘worlds’ collide by chance and, in these moments, the gaze is literally thrown from one female character to the next, a bit like a relay. Made in the late 80s, the film was an exploration ofinternal and external states of emergency andwas a direct response to a world beset by greed, natural catastrophe, war and changing weather patterns. Inspired by the avant-garde and the surrealists, it was an experiment in shaking up narrative expectations and exploring the possibilities of image and sound.

The first character, The Redhead, is part homage to the legendary experimental filmmaker Maya Deren, who stopped the traffic in New York in the 1940s with her wild red hair and unconventional clothes. Her character came from my interest in the maternal, memory and psychoanalysis.

The second character, The Investigator, is part homage to the late Aboriginal activist Pearl Gibbs, whom I came across working on a documentary film about women’s history. I am told Pearl worked for a government department in the 1920s and crept in at night to search through the files of young women, who had been stolen as children and placed in service, so she could advocate for them. Pearl was a tireless activist and always very fashionably dressed, which is why I have given her such stylish outfits.

The third character The Hothead, is obsessed with romantic love. She is the wild, immature part of me who caused me such trouble in my youth. Her image was quite simply cut out of a magazine. She is full of life and passion, but terribly hot-headed.

Maria Tatar argues that early fables and fairy tales like The Juniper Tree were not for children, but cautionary tales for adults [1]. Do not abuse children or they may reappear like the little boy in the original tale and drop a millstone on your head!

Bruno Bettelheim argued that step mothers and mothers were often interchangeable in fairy tales. He thought tales with evil stepmothers were there to teach the child that ‘the mother’ is not only a good and loving mother. She can also get angry and suddenly turn into a wicked witch, but when the witch or the wolf is killed, the good mother or the kind grandmother will return triumphant [2]. But in the Brothers Grimm version of The Juniper Tree, she doesn’t. It is the little boy who returns triumphant.

I will leave you to discover how Nietzchka Keene transformed this story. I hope it weaves its magic for you.

Margot Nash is a Visiting Fellow in Communications at the University of Technology Sydney. She originally delivered this introduction prior to the Cinema Reborn screening at the Randwick Ritz, 2 May 2021.

This program is being represented in the Cinema Reborn season in Melbourne from 14-17 October. Full details JUST CLICK HERE.

In Melbourne the program will be introduced by Robin Laurie, who plays The Redhead in Shadow Panic.

[1]Tatar, M Telling Differences: Parents vs Children in ‘The Juniper Tree’ in Off With Their Heads: Fairytales and the Culture of Childhood, Princeton University Press, Princeton, new Jersey, US p. 213

[2]Bettelheim, B. 1976 Transformations: The Fantasy of the Wicked Stepmother inThe Uses of Enchantment, the meaning and importance of fairytales, Thames and Hudson, London. Pp. 66-73

The Secret Pilgrim “ Then the legend began talking, and I realized I had never heard Smiley address a social gathering before. I had assumed... 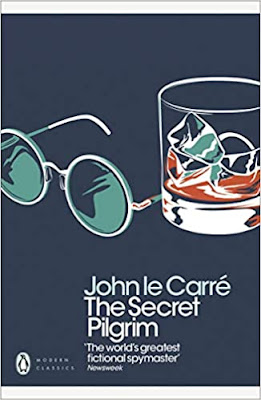