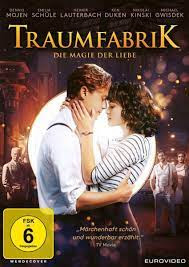 In the current German Film Festival, the new Traumfabrik/Dream Factory, by one Martin Shreier, is a film about the German Babelsberg film-making complex, which became DEFA studios when they ended up in the Russian Sector after WW2; and what happened when The Wall went up in 1961. It seemed like something I should pay attention to and hopes were raised when the studio trademark turned out to be the Metropolis robot.

However, the movie stuff was irritating. They show us a whole range of angles impossibly generated from a single camera doing a single run. The lead and his propsman brother write a hit film overnight, while the East German Cultural Komissars are buffoons. The film has them endorsing a mammoth ancient Egypt historical spectacle (totally at odds with the real-life DEFA output) and outraged that the news (a reporter chats to the gatekeeper) should be broken by a Second Rank Class Enemy Tabloid. This of course means that everyone’s status depends on the film’s success.

The story proper kicks off with Dennis Mojen (Netflix's Isi & Ossi), still in the remains of the uniform from his military service, presenting himself at the studio gates looking for brother Ken Duken, who runs the property department. Mojen makes eye contact with fetching Emilia Schüle in her limo. She gives him the finger.

An aerial view of the immense Babelsberg installation proves to be a photo mural being carried past. There is the movie making movie-familiar scene of passing show girls and marching troops, in with a camel, and a curious moment of freezing for the red light before an explosion sends Fullers Earth covered extras pouring out of the giant stage doors.

Mojen fails as a props man herding the studio geese which the drunken Russian extras like to eat, and kisses Schüle when he’s rung in as a lighting double for her black pirate movie, generating chaos.

She, however, saves him from the studio goons sent by Generaldirektor Heiner Lauterbach (the lead in the 1985 Doris Dörrie Männer/Men) who tells him “You can’t even stand still” before having him thrown out. The young people make a maybe date for the next day but troops appear in the streets barring her way. DEFA is thrown into confusion with half the personnel unable to get to their posts and, in all this, Mojen is accepted (big ask) as a producer-director and concocts a scheme to get Schüle back by starring her celebrity employer Ellenie Salvo González (authoritative) in his DEFA life of Cleopatra.

This implausibly gets the green light but meanwhile Schüle has become an item with Nikolai Kinski (son of Klaus and with the same air of menacing decadence - they cast him as Judas in a TV series and as Jalil Lespert’s Yves St  Laurent) and it seems that all is lost.

Traumfabrik inserts a saver when what we are seeing is shown as the highly coloured recollection of the little boy’s aged grandfather (“You made it all up”) but I’m not convinced.

The script does have two strong story arcs - the need for Mojen to break the pattern of his life as a screw-up and Schüle's choice between the freedoms of Paris and a prison state East Germany where she has already seen the beat cops routinely throw her lover into jail for no reason. However, the dramatic potential of these is dissipated in glossy feel good handling.

The writing recalls other movie plots. The list of Mojen’s failures rings of Robert Redford in The Way We Were deciding that the only real profession he has is movie making and the conclusive nature of our heroine’s performance suggesting SlowDancing in the Big City.

The great looking young leads do manage to work up some audience involvement.  That shot of Emilia Schüle's naked back was bound to be in the trailer. She proves to be quite a mover too, with her sexy Cleopatra dance and the big finale, a ballet number modeled on Lil Damita’s in the 1925  Der goldene Schmetterling. Herr Mojen keeps his shirt on throughout.

You could do worse than watch Traumfabrik.The ending is genuinely involving notably when the staff throw their support behind our hero (I've been involved in one of those) but be prepared for lots of dissatisfactions along the way.