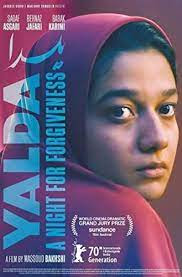 The Northern European films that people tend to think of as sub-titled cinema are getting to be predictable. That’s what people like Jean Dujardin and Benoît Poelvoorde are in reaction against. By contrast, films from Iran, or as many of them as we get to see, require mental gymnastics. We never seem to get the films that are just meant to cheer up the home audience.

What are they trying to tell us and do we trust them?

You’d be hard pressed to get a better example than Massoud Bakhshi’s new Yalda, a Night for Forgiveness  with its mind bending plot

An effective night time opening shows the lights of the Iranian cityscape as a police car weaves through traffic bringing young Sadaf Asgari to the TV studio, head covered and in hand cuffs. She’s been sentenced to be hanged for murder and is to appear as the guest of a Reality TV program “Joy of Forgiveness” which regularly hosts people who need pardon for their crimes from the people who have suffered, in return for “Blood Money”, as prescribed by Sharia Law. Some of the personnel say this is too somber to present on the Yalda Feast Day.

Asgari is ushered into the TV station and her mother, Fereshteh Sadre Orafaiy, gets her to change her chador for one that’s more becoming. The program’s other star participant Behnaz Jafari, the victim’s daughter, hasn’t shown up. Things don’t go to producer Babak Karimi’s expectations.

Rather than being humble, Asgari (incorrectly) protests “Mona doesn’t need money.” She watches the “Documentary”, which fills in the details of her case, go to air - killing the much older man with whom she had entered into a temporary marriage after breaking their agreement by becoming pregnant.  Asgari protests “You’re humiliating me.” Karimi has to have director Zakieh Behbahani cut to the song that has been scheduled later. They also have a star to read a poem and a chorus of students from the School of Law and Religious Morality on hand to offer interludes, while compere Arman Darvish off-camera urges Asgari not to ruin his show. Producer Karimi has a better feeling for audience dynamics and orchestrates the new developments from behind the scenes. A tea guy hawks his tray of nuts, dates and olives in the control room.

We have seen the idea of life as a tabloid TV show before in Natural Born Killers or  Douglas Livingstone's remarkable seventies British TV Play  I Can Still See My Little Willy.

Discovering the back story, sympathy shifts to the young woman - and away from the Iranian legal system. There’s a telling cut between her tear stained features and the stony face of Jafari, who looks likely to withhold her permission, though she is weighed down with debts, and then the couple in the foyer, who have been begging to be admitted, arrive with a super melodramatic revelation that reverses the situation. The public prosecutor, with the forgiveness document, is on hand to explain the new legal twists. The outcome plays in the studio against their fake falling snow and back projection of flying doves.

Bette Davis at her zenith would have been at home in this one, if she could have kept up. 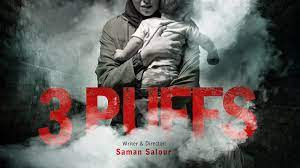 We start off with over worked couple Mohsen Tanabandeh and Parinaz Izadyar in a cheerful exchange about her still wearing a head scarf at home with him, though they’ve been married long enough to have a growing baby to support. He reproaches her for not using lipstick, (though like all the film’s women she has Groucho Marx painted eyebrows) joking about this as a reason to use the marriage code’s quick verbal divorce.

Before long however Tanabandeh is lying on their bed beaten and unable to control his bowels while the baby screams and the drains overflow again. Izadyar  finds that her husband has sold their house to attempt to run up his fortune in the drug trade and he himself is a crystal meth user, wanting her to take him into the hospital wash room and improvise a dope pipe out of a light bulb (very instructional) to give him the thee puffs he needs to carry on.

They are sucked into the city’s sordid drugs business and meet corruption on all sides. The policeman who searches the flat accepts the bribe of her wedding rings to let Izadyar escape. The nurse caring for Tanabandeh is an addict stealing the hospital’s morphine and amphetamines and the development of her sub-plot proves very characteristic of Iranian dramatic films.

The climax - Izadyar at the wheel of the smashed car with her near dead husband, a screaming baby and more than the kilo and a half of the dope which mandates execution - can’t be accused of offering escapist entertainment.

More involving than the film’s sensational - though quite suspenseful - plot is the detail of contemporary Iranian life - builders working in the hospital as medical work continues, drug dealing from a car in the streets or in a stable or a wrecking yard. We see the couple in a sea of motor cycle visors and the reflection in the shattered rear view mirror or electric wires outlined against the sky at sunset. Their outsourced doll making dots images with broken humanoid figures. All create attention-catching visuals,  spaced by the director’s occasional stylish handling as in his long complicated tracking shots through the factory or the roof top entrance to the family home.

Lead Tanabandeh is also in the new Asghar Farhadi film A Hero. Cast and technicians all perform to the best professional standard. The piece is shot in the desaturated color which appears to be becoming fashionable at the moment. 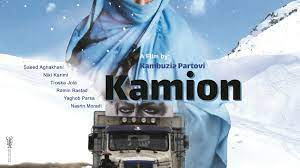 When you get away from the festival-favorite Iranian films, it's hard to find two that are alike. Kamion/The Truck does have the humanist sympathies that come up in the best of these. They even have a scene where the Yazidi female lead disarms her teenage son when he wants to attack their protector for showing an interest in her unveiled face, comparing him to ISIS which they are fleeing.

The film opens with scenes of war in the snow. Plot, what there is of it, has Saeed Aghakhani (African Violet) the truck driver hired to take her, her baby and boy, with their few household goods to Tehran where the father has gone for work.

She is given the family’s gold bangles to see her through. When her husband is not at the worker's lodgings, where they were told they'd find him, we move to a version of the missing character  L’Avventura plot.

They pass a dead body, face covered in the street, on which people are laying money and the husband’s old employer gives her his bag and money owed the missing man.

Checking the square where day laborers gather looking for hirers, there is a convincing fender bender with the car of a woman who proves to be a famous movie star. The motorbike policeman who is called in grovels. When she revives, the star proves sympathetic, delighted by the baby. Later they find a photo of the husband with her, which is never explained. The abruptly blended group find themselves encountering the best and the worst of the city, its metropolitan sprawl confronting to the Yazidis.

An attractively filmed fruit stand is a place to get food. The wife hangs out the washing on an improvised line from the truck to a tree. The temporary home she creates out of her furniture in the enclosed rear cabin is a nice touch as is the visit to the driver’s friend who dances to radio music at his welcoming roadside cafe.

The driver never considers abandoning her, though he has a commitment to his own daughter’s birthday that night. His simplicity is one of the things that drives the film as they go from one adversity to the next. The characters, starting with a veiled woman unable to relate to the transport worker who doesn’t speak her language, are filled in with sympathy, becoming the film’s strength. Playing this against real locations on the road and in the city is a key element.

The piece has a different look from what we usually see. The wide screen images are often ordinary though they do manage a few striking moments - the lights coming at the camera on the highway in the rain at night, the running woman overtaken by the truck in pursuit of the rug thieves.

This was the last film of an established Iranian director Kambuzia Partovi whose work goes back to 1988.

It’s largely in Persian. English sub-titles on the copy viewed were distractingly poor - "I didn't luck the door."

They tell us this was the ninth Iranian Film Festival. It was short on documentation and the films I saw were not masterpieces but they did make an agreeable contrast to what we are usually offered and they all turned up on schedule in acceptable copies. That’s already something. I'd have seen more if the price was less inhibiting.