The 3rd film in the season of restored classics by the French master Jean-Pierre Melville goes up on the big screen at the Elsternwick Classic and Hawthorn Lido, next Sunday June 27 and Monday June 28. 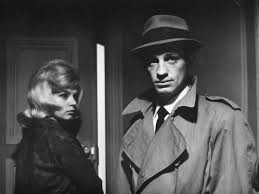 “But for the sixty-three American directors who invented talkies in the thirties, I would never have made Le Doulos.  The settings in my film attest my passion for a kind of film-making.”Jean-Pierre Melville

Co-curator f the Melbourne Cinematheque Adrian Danks commented: “One must choose. To die… or to lie.” Melville’s rigorously directed and intricately plotted tale of self-defined morality in the criminal underworld focuses on a convict who seeks revenge for the murder of his girlfriend. This is the first of Melville’s explicitly modernist crime films in which the world created appears pre-determined, patterned, curiously abstract, almost geometric. Serge Reggiani and Jean-Paul Belmondo perfectly ‘impersonate’ the Hollywood film noir anti-heroes so admired by the director since the early 1930s. Also features Michel Piccoli. 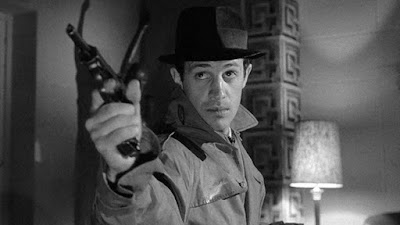 Le Doulos is a film with many supporters among them are two friends of Cinema Reborn quoted below. Special thanks to them for sending through their thoughts.

The 1962 movie in which Melville invented his distinctive brand of American-French noir, crammed with un-French cars and bars, hats and raincoats, phone-booths and whisky-drinkers, public and private decors -- and a fine spectrum of un-American cops and criminals headed by Serge Reggiani at his most charismatic, Jean-Paul Belmondo at his most impressively restrained, Michel Piccoli at his most urbane and desperate and Jean Desailly (the cop) at his most self-dramatising. No complex noir plot ever boasted such an array of misdirections, double-crosses, and long-held grievances, and no noir stylist ever attempted anything like the nine-and-a-half-minute take in which the cop raises all the stakes (in a set modelled exactly on the police station in an old Mamoulian film). No higher truths are implied or required. This is generic entertainment at its most sublime."

A favorite of Tarantino and Walter Hill, Melville’s  Le Doulos blends revenge; duplicity, Langian fate; violence and  murder in his bleak minimalist noir style; Paris by night. The hats, the trench coats, the cigarettes, a Misraki score. What more do you want?”