The key scene of Alain Cavalier’s La Chamade, retitled Heartbeat for its brief US release,comes halfway through. Catherine Deneuve, seated at the bar of a Paris café, is reading William Faulkner’s The Wild Palms. A passage so impresses her that she reads it aloud to the other customers. Whatever one does, urges Faulkner, be it to eat or drink or make love or take a dump, one should enjoy it to the limit, since you’re a long time dead. The dour office workers look up from their Croques Monsieur and burst into spontaneous applause.

Traditionally, the nouvelle vague transformed French cinema, so by 1968 such well-made films as this, based on popular novels and featuring major stars, should have disappeared, consigned to the genre belittled by François Truffaut in his essay Une Certaine Tendance du Cinéma Français as “a cinema of...” (pause to sneer) “...Quality.”

In fact, they flourished. Jacques Dugied’s recreation of life in the elegant satellite community of Neuilly has no hint of the nouvelle vague. As for Pierre Lhomme’s lighting,  one suspects he would eat glass rather than engage is anything as vulgar as a hand-held shot.

Françoise Sagan’s La Chamade – literally the drum roll that sounds retreat but here a simile for the excited beating of the heart – gave her readers what they expected; a story of beautiful people facing emotional conundrums which they solve by socially acceptable means.

Deneuve’s Lucile has known only luxury. As the mistress of Charles (Michel Piccoli), she is the classic bird in a cage not so much gilded as solid gold. At a theatre party, however, her eyes meet those of Antoine (Roger van Hool), a young journalist and lover of their friend Claire. Charles intercepts the look and decides to encourage their liaison as a kind of treat for her, like a gourmet proposing a walk on the wild side with a hot dog.

Predictably, it all goes wrong. Pressured by Antoine, she abandons leisure and Neuilly for his attic apartment and a job in the basement of his newspaper. Were it not for the job, however, she would never have read The Wild Palms and experienced her moment of revelation. It remains only for Charles to dangle before her the prospect of returning to the cage. Visiting their old home, she opens a wardrobe and finds all her beautiful clothes just as she left them. The last shot is of Lucile walking down the middle of an empty street, at home once again in the world for which she was born.

Appearances and particularly clothing are at the heart of La Chamade. The most extreme crime passionel  in this world is to show emotion. In a well-directed scene at a cocktail party, Charles’s friends silently assemble to show their disapproval, not of Lucile, but of Antoine for having seduced her and dumped Claire.  Just not done, dear boy.

Lucile’s wardrobe, furnished by Yves St Laurent, is of the essence.  When she returns to Neuilly to say goodbye to Charles, she’s wearing some unflattering jeans. They, more than anything else, signify that he’s lost her. After watching the lovers leave from the window of her former bedroom, he pulls the curtains, turns off the lights and, with an air of finality, closes the door.  Occasionally the Vogue-ishess achieves a slightly comic edge, as when, taking public transport for the first time, she tries to squeeze onto one of the old-fashioned Paris open-backed buses, her sole concession to the weather a coat probably worth as much as the bus itself.

Later, she faces a Top Person’s Crisis when, as she sells some of her jewels, a rich American offers to replace them if she will have lunch with him – and more?  Rather than slapping his face, she steps outside with him and they share a cigarette. She’s tempted, since, he is, after all, a gentleman  - One of Us.  But the column in the middle of Place Vendome reminds her that, in the first passion of their affair, Antoine took her to the top to show her that there is more to Paris than Neuilly.  She turns down the American’s offer, but a life of l’amour et d’eau fraiche no longer seems quite so appealing. 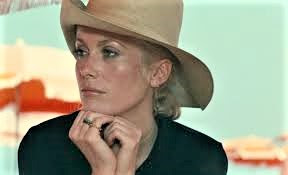 At 25, Deneuve had already made Belle de Jour, Les Parapluies de Cherbourg and Les Demoiselles de Rochefort, but in none of them is she as beautiful as in La Chamade. Thirty years later, perhaps not by coincidence, she returned to Place Vendome in Nicole Garcia’s eponymous film, now the alcoholic proprietor of a failing jewellery business – and, it might be surmised, a vision of Lucile as she could become in middle age. It’s in many respects a more glamorous portrait but the flush of a drinker has replaced the innocent blushes of La Chamade and what William Blake called “the lineaments of gratified desire.” I know which I prefer.

YouTube has an excellent but un-subtitled copy of La Chamade though you can generate a set of French subtitles if you hit the CC button.