Minnelli's The Pirate was released in May 1948 after two years of gestation, and a history book's worth of gossip, trouble, tantrums, changes, disagreements, censorship, Garland’s latest breakdown, her divorce from the director and a cost overrun that left the picture floundering with more than 2 million (then a fortune) of debt for MGM. It’s never made its money back to this day.

Despite this, the movie is I am sure the most elegantly conceived, formally extended, most sophisticated and whimsical musical ever to come out of the Freed Unit. It’s perhaps the very greatest work of the highest imaginable aestheticism and design, casting, dance, performance, color and self-reflection, all carried by a minor narrative whimsy in the "once upon a time" mode from a very slight 1942 S.N. Behrman stage work, to a complete re-write which inverts the character impersonation theme totally by Goodrich and Hackett and a fully commissioned new score by Cole Porter, with the battery of the Freed Unit's peerless team of artists and crew, not least, Roger Edens, Robert Alton, Kay Thompson and, for the first time at Metro, costume designer Tom Keogh. His wardrobe broke the bank and every expectation for a conventional “period look” but instead complements the films seductively narcotic color design. If ever a film was made for the three strip negative, dye transfer positive printing process in 40s Technicolor, it’s The Pirate. 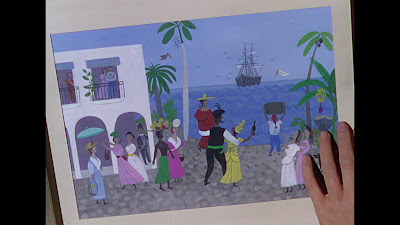 The picture begins after the credits with a red leather bound title cover page, followed without a cut by a series of exquisite water colored faux naif "storybook” illustrations (above) of the movie’s materials concerning the pirate, Mack the Black Macoco, and his fabulous exploits of pillage, swashbuckling and expressively direct masculinity, all read by a breathless Garland over the turning pages. Then without a cut, Minnelli pulls the camera slightly back from these gorgeous pictures (by Metro studio artist Doris Lee) and the amber tanned hand of Judy’s arm, playing Manuela (below) comes into shot, and then we track further back to group shot with even more hallucinatory imagery in three strip dye transfer Technicolor of the tale teller with her cohorts, as the driver of this great erotic fantasy. 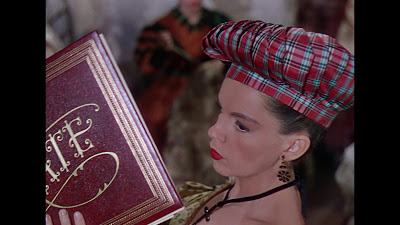 The film never leaves this hallucinatory realm of color, design, movement , costume and music. Each sequence to run the narrative opens with a reveal of the next persona in close or medium and the camera which by now has established its identity as another character, one of us, the audience adopts a life of activity with the most brilliant tracks, cranes and dollies seen in the forties. 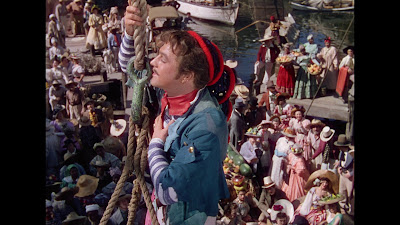 Kelly uses the film to pioneer his own ideas about male dance extending the three minute routines to ballets of solo male with chorus. The first musical number in the film comes just fifteen minutes in and introduces Kelly, and his travelling group of players. The sequence is set in what looks like an immense open air portside scene, and it certainly appears to be the film’s only exterior shot, but it’s simply the Metro backlot with a crane that stays with Kelly  for the first two minutes of the sequence from ground level to way on high (above) to the town and then a cut which begins the first verse of Cole Porter’s dazzling “Nina”. 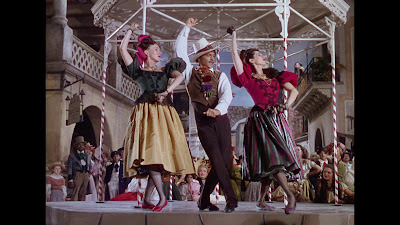 Kelly stages the song, an emblem of Porter’s wit and sophistication if ever there was one, with winks to the audience about psychiatry and unresolved passion. “Nina” all up is brief and funny but Kelly then stages a ballet up down through and over every corner of the set ending the first part of this six minute marathon with a completely debauched open mouth kiss with one girl (below), with the cigarette with whom he plays a tongue trick taking the cigarette into his own mouth and then swinging her over to kiss her, opens his mouth with the cigarette intact. This outrageously carnal gesture announces the second three minutes of this gob smacking sequence in which Freed’s and Metro’s greatest individual music arranger, Conrad Salinger now takes over Cole’s song and the score and orchestrates the next three minutes without lyrics totally for Kelly’s ballet as a solo with chorus into a tour de force of Bolero rhythm, complete with a blistering trumpet solo, all of which take the number into the stratosphere. 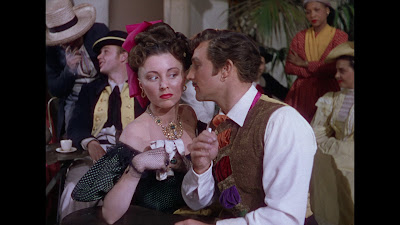 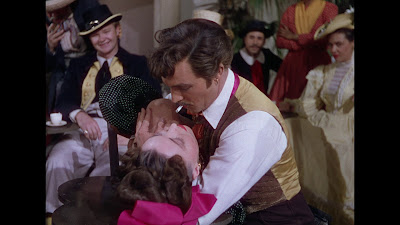 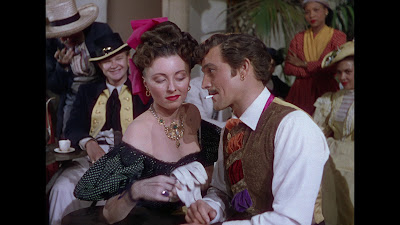 I think “Nina” is my favorite musical number in Freed musicals. The camera becomes in effect Kelly’s dancing partner, moving through and back, away and forward, to observe the dance, which climaxes, literally with woman after woman after woman throwing themselves at Kelly on the town square “stage”, to be “used” with a quick footed spiral step and then spun off the stage as discarded bounty. The number ends with Kelly racing from the town square which has just hosted this past six minutes of pure sex, and travels with him up and into a close-up against his own image painted onto a poster for their travelling circus’ show (below). 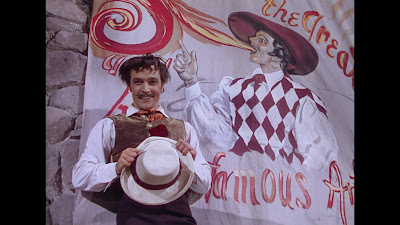 It’s one of those devastating bravura Minnelli sequences that fully embeds all the strands of the film into the imagery – performance, desire, impersonation, lust, rejection and theatre as performance of someone else’s “reality”. It clearly sets the page for Kelly’ big dance expansions into the ballet mode which were embedded into his and Minnelli’s An American in Paris  five years later. But I now find Nina superior formally to the relatively literal Gershwin ballet and even its fine choreography and ace DP John Alton’s Oscar winning Noir-esque color filtered photography on that picture.Thus a basic Porter number meets Salinger and Kelly and the full resources of the Freed unit and extends into a titanic major sequence to end the first act.

The movie lost at least two of Cole’s original songs during production, including one cut by the appalling Louis B Mayer as too “depraved”, “Voodoo”, which would have followed the first rendition of Mack the Black by Garland under hypnosis and chorus in the show tent. Other items were changed or shortened – the “Light of my Life” number survived only one verse, but its presentation as it stands now is flawless, preserved in a single one minute take with Garland singing to Kelly.

Indeed even Garland’s now visible amphetamine addiction is put to use in two sequences which Minnelli apparently directed again with a minimum of takes. Interestingly enough, although Judy was absent for over 100 days of shooting time, thanks to Mayer’s criminal regime of prescription addiction that was finally bringing her again to breakdown, she has never given a better performance in my opinion either physically or vocally. She can throw a tantrum and a room full of furniture at Kelly in the exposé sequence, but her vocal range keeps her performance bedded in control. And like Judy, Kelly, too has never been better nor more beautiful, never sexier, never more self-aware or more exhilarating. Certainly his part in the second “Mack the Black” routine in which he does the ballet wearing leather hot pants and a tea towel, with the body of a prime athlete in devastating peak condition, ends as always with the image of his face bursting with the sheer excitement of completing his number.

There’s not a trace in The Pirate  of the overbearing egotism that cruels so many of the final closeups in Kelly’s numbers from Singin’ in the Rain. The material for The Pirateis so sharp, so sophisticated, so far ahead of its time, even for Freed, one of the joys of watching the movie is simply seeing the satisfaction the leads are taking in their parts, including I must add Walter Slezak, to whom Minnelli gives some of the most affecting and moving close-ups in the picture as Garland renounces him. Never has desire looked so bleak, even in this glorious phantasmagoria.

It’s very difficult to pin this movie down, either as a Freed canon work, an avant-garde musical avant-la-lettre, a Minnelli masterpiece of the purest formal beauty and mise-en-scene. I think it’s simply all three. There’s no more dazzling musical formally in the Hollywood pantheon, even Minnelli’s earlier 1944 Yolanda and the Thief which has several similar tropes, and a bobby dazzler of a central six minute choreographed sequence with Astaire and yet another bevy of menacing women in prime Technicolor wardrobe, “Will you Marry Me.’

At this point Yolanda is likely a personal expression of Minnelli’s own terror and/or ambivalence as a basically gay man about to marry Garland. The sheer panic of that dance and the movie’s very thin plot is very readily wiped out at the end of Yolanda with the superbly composed “Coffee Time”, choreographed by Astaire and Eugene Loring which runs the dancers in five/four time against a score written in four/four time. The number effectively overwhelms Yolanda’s narrative thread, and resolves the matter with such a perfectly refined musical trick for the end.

For the Finale of The Pirate  Freed and Minnelli obviously needed something that was both still hip but able to bring down the temperature from the astonishing 95 minutes that preceded it. So Cole wrote “Be A Clown” and that great number, itself a dedication to the world of show business, brings the two leads, and the Freed team of artists to a close of a perfect movie.

Warner Archive’s new Blu-ray of The Pirate was taken from new 4K scans of the original Tech nitrate three strip negatives. The image and sound (12 bit uncompressed mono) are in perfect service to the movie they restore. It looks and sounds, if it’s possible, better than it did in 1948.