It seems that every time I return to this thread, I come back with more Éric Rohmer films. The master, I must admit, has a light touch, and provided me with an avenue of escape from the sombre realities of 2020.

Of the 8 films listed above the last 6 are from his Comedies and Proverbs series and the first two films continue as the 5th and 6th installations of his Six Moral Tales which are as follows: The Bakery Girl of Monceau, Suzanne's Career, (both short films), then The Collector and My Night at Maud's, (I have reviewed these earlier on), and then the last two in the series - Claire's Knee and Love in the Afternoon. I would say that all of these films could be seen as intimate studies of love – a kind of understated, almost quotidian quietly observed humanism.

What is so remarkable about Claire’s knee, (as in her actual knee) so as to have a film made about it? Perhaps nothing, but that is precisely the point - that sometimes, something so moves us that we can’t help but be enthralled by it. As people, we almost never connect on a grand scale with each other; (if we do, is all airs and pretence) whether we would like to admit it or not, it is with some of the most trivial or intimate observances, feelings, inklings that connects one person to another. And this 'thing' is always more noteworthy than some showy grand gestures of romance. So, it is precisely from this principle that Claire’s Knee is born - a gorgeous film where love and obsession ebb and flow quietly. The young Béatrice Romand (below with Jean-Claude Brialy) is wonderful as Claire's half sister Laura, who falls for Jérôme, who in turn falls for Claire('s knee).

Romand went on to collaborate with Rohmer in many of his later films; and you recognise her talent even here (in her second film); you'll also find a young Fabrice Luchini (with Brialy below) who is all fresh-faced, lanky and blond (he appears again in The Aviator's Wife). 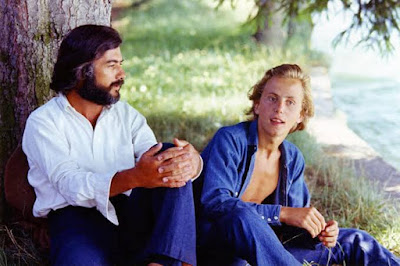 Love in the Afternoon on the other hand is not as delicate in describing love, but explores a consuming, stifling kind of obsession that is addictive when one is on the receiving end. This is what happens to Frédéric, played by Bernard Verley, who is happily married with a child and another on the way; when his ex-lover reappears in his life. They began spending their afternoons together. However, when there is no sex involved, where does this 'affair' leave you? Is an affair of the mind not equally as dangerous as a sexual affair? My favourite scene is the dream sequence where all the women from Rohmer’s other Moral Tales appear to Frédéric as a kind of chorus.

For his Comedies and Proverb films, there are two common themes that run throughout his close observations of the female psyche - the fragility of relationships and a belief in chance encounters. Other directors, such as Wong Kar-wai also explored these themes (think Fallen Angels, Ashes of Time  and Chungking Express).

The Aviator's Wife  is the first in the series. I adored this film with its many meanderings and its open-ended ending. Philippe Marlaud played the lead role of our unnamed protagonist, a postal services worker, who sees a man, (Christian, an airline pilot) coming out of his girlfriend's (played by the beautiful Marie Rivière) apartment one morning, and suspecting the worst, he follows him onto a bus, (and then into a park) where by chance, he meets a charming young 15 year old girl Lucie played by the wonderful Anne-Laure Meury (later appearing with cropped hair in Boyfriends and Girlfriends), who has decided to skip school to go to the park for inspiration. The theme of transience and transition are embodied by its characters who are either displaced from where they were meant to be, or they assist in the idea of the traversal of messages e.g. notes gets left, letters are posted, messages missed being passed on. Together, the pair wander around Paris by following Christian and the blonde woman through the streets of Paris, just like Sophie Calle in one of her games. I was sad to learn that Marlaud died in 1981 only 6 months after this film was released from an accident whilst camping. He was only 22. I would like to pay him tribute here.

Arielle Dombasle is lovely in both Pauline at the Beach and A Good Marriage, she is the ‘wiser’ of the two women in both instances; whilst the young Pascal Greggory (second below), a broodingly handsome jilted lover of hers, steals the scene in Pauline at the Beach. Pauline played by Amanda Langlet (below) - short-haired tanned by the European Summer - is reminiscent of Haydée Politoff in Rohmer’s earlier film La Collectioneuse. It is the Summer holidays and boys and girls meet and have dalliances - how wonderful it is to be young! 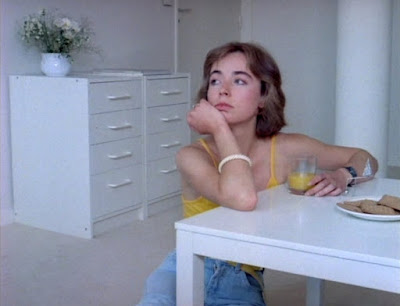 Béatrice Romand is ‘unlucky’ in love, or so she self-professes in A Good Marriage; whilst a young André Dussollier doesn’t do much to proof her theory wrong (both below).

In Full Moon in Paris, we get a glimpse of the talented Pascale Ogier (Bulle Ogier’s daughter) who was only 25 when she made this film, but passed away shortly before her 26th birthday. For anyone who was a teen in the 80s you would remember the fashion, music, dance moves and hair styles (a preference for curly hair with a bow tied at the top) that Louise (Pascale's character) embodied. She was an 80’s ‘free spirit’; self-assured and always seeking a good time; she took up an apartment in Paris as her a pied à terre, before spending more and more time away from the out-of-town apartment she shares with her partner. She flitted from one party to the next, accompanied by a young Fabrice Luchini before falling for a Billy Idol lookalike saxophonist played by Christian Vadim (you guessed it, Catherine Deneuve and Roger Vadim’s son).

Whereas in Boyfriends and Girlfriends, Blanche is more unsure of herself and is often tongue-tied when meeting a new boy; unlike her new friend, Lea. Ennui sets in when it’s the Summer vacations, unless, of course, by chance you meet your girlfriend’s boyfriend.

Saving the best till last; Le rayon vert is perhaps my favourite of Rohmer’s Comedies and Proverbs series of films. The proverb that Rohmer had selected for this film is this: “Ah! Que le temps vienne | Où les cœurs s’éprennent” from Rimbaud’s Song of the Highest Tower, which simply means “Ah, may the time comes when our hearts catch on fire.” However, the film borrows its name from a Jules Verne novel (graphic at the top), which describes a rare phenomenon where a brilliant flash of green can sometimes be seen when the setting sun hits the water in the horizon. This story is told anecdotally by a man who had just read the book to his companions at a beach. Delphine, visiting on her own overheard his intriguing comments, stayed to listen.

Marie Rivière’s Delphine is gloriously sensitive and vulnerable; again ennui, solitude and Summer do not mix very well. Can Delphine find happiness? One can only wish that for her.

Verne’s story deems that anyone who sees this green ray will have a clarity of vision, into other’s feelings as well as your own. I see the phenomenon as a reversal to the lament for the end of Summer, and instead, hints at the burning in one’s own heart that matches burning rays of the sun. This, too, is a rare phenomenon.

Treat yourself to the superb Éric Rohmer boxset (below) from Potemkine Films in Paris  (I got this for Christmas!). Or, a couple of the Australian streaming service are also showcasing Rohmer’s films.

You can catch The Aviator’s Wife, Love in the Afternoon, Pauline on the Beach, A Good Marriage and Full Moon in Paris on #stan and all 6 of his films from the Comedies and Proverbs series are available on #mubi 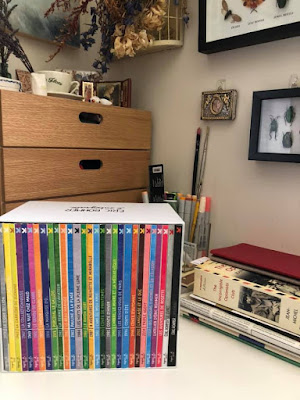